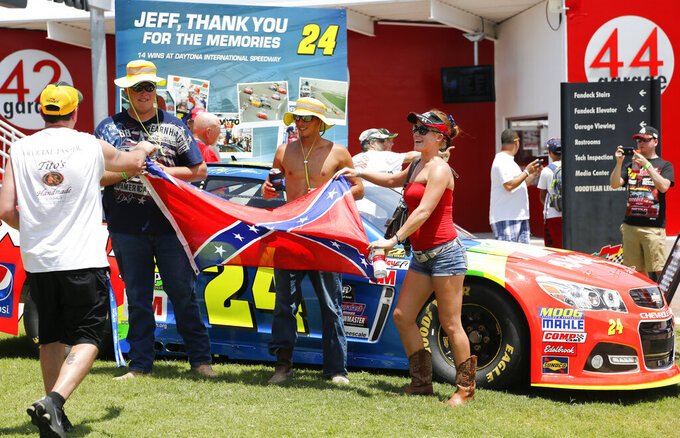 FILE - In this July 5, 2015, file photo, race fans make a photo with a Confederate flag in the Fan Zone before a NASCAR Sprint Cup series auto race at Daytona International Speedway. in Daytona Beach, Fla. A predominantly white sport with deep Southern roots and a longtime embrace of Confederate symbols, NASCAR was forced last summer to face its own checkered racial history during the country’s social unrest. (AP Photo/Terry Renna, File)

DAYTONA BEACH, Fla. (AP) — NASCAR received warnings — “Go Woke, Go Broke” — from every corner of the internet last summer. Fans said they didn't want to hear about social justice, and banning the Confederate flag at racetracks would drive them from the sport forever.

If there has been an exodus, NASCAR has not noticed.

A predominately white sport with deep Southern roots and a longtime embrace of Confederate symbols, NASCAR was forced last summer to face its own checkered racial history during the country’s social unrest: Bubba Wallace wore an “I Can't Breathe” T-shirt on pit road and raced a car with “Black Lives Matter” painted on the hood; his peers promised to listen and learn; a NASCAR official knelt during the national anthem; and the governing body vowed to to do a better job of addressing racial injustice.

As a new season begins Sunday with the Daytona 500, a new era of social consciousness has enveloped the sport and NASCAR is committed for the long haul. There's not a Confederate flag to be found at the speedway. A large sign before an infield tunnel warns that the Stars and Bars are barred from the property, and compliance has not been a problem at Daytona.

Wallace, the only full-time Black racer at the national level, has been the face of NASCAR's movement. Born in Alabama but raised in North Carolina, Wallace no longer wanted to see the Confederate flag at his workplace.

Wallace found his voice on racial injustice after the deaths of Ahmaud Arbery in Georgia and George Floyd in Minneapolis, and the backlash was immediate. Less than two weeks after Wallace's successful push to ban the Confederate flag, fans paraded past the entrance at Talladega Superspeedway with the flag flying from their vehicles.

He received death threats, has been booed during driver introductions and the crowd at Bristol Motor Speedway cheered when he wrecked. A garage pull in his NASCAR stall had been fashioned into a noose — an FBI investigation found it had been hanging for months — and people falsely accused Wallace of faking a hate crime.

Even President Donald Trump blasted NASCAR on Twitter for banning the flag and wrongly accusing Wallace of perpetrating “a hoax."

Wallace has since signed multiple companies to a sponsorship portfolio so deep that Michael Jordan and Denny Hamlin were able to build a race team around Wallace that debuts in the Daytona 500.

DoorDash is Wallace's sponsor for the opener and, a week after its first Super Bowl commercial, will air a spot during the Daytona 500. The Super Bowl ad featured entertainer Daveed Diggs and the Sesame Workshop as DoorDash reinforced its mission to grow and empower local economies.

If not for the brief fadeout that flashes Bubba Wallace, 23XI Racing and DoorDash, the commercial has no brand marketing or overt NASCAR symbolism.

“Our goal was to create work that would celebrate Bubba’s voice, his journey and his mission, and stand apart in its stark evocative simplicity from every other ad that runs during the Daytona 500,” said Kofi Amoo-Gottfried, DoorDash’s vice president of marketing.

“We share Bubba’s drive for change — a desire for a more inclusive sport, and a more inclusive world. This is a long journey, one that began before Bubba and will continue with him and future drivers, so we also wanted to recognize the lineage of Black drivers who have moved the sport forward.”

It's a dramatically forward-thinking approach for a sponsor catering to car enthusiasts, but Wallace's brand encompasses much more than racing. Wallace has found that the new companies he's brought into NASCAR — DoorDash, Columbia Sportswear and Root Insurance — chose to partner with him because of his activism first, racing second. Along with McDonald's and Dr Pepper, Wallace has a fully funded car for the first time in his career.

“The conversations we've had (with sponsors), they've all wanted to know, ‘What are we going to do off the track to keep pushing for change?’” Wallace said. “They've all said: ‘Oh, we’ll be on the car, that's obvious, that's a no-brainer. But what are we going to do? They are more focused on the messaging and how we can ignite others to do better and be better.”

Phelps believes taking a position was “a seminal moment” for NASCAR that showed that the sport is welcoming to new fans and new companies.

“It opened up an aperture to a brand-new fan base,” Phelps said. “There was a question at the time: Social justice, is that something a sport should do, NASCAR should do? Do we have permission to do it? The answer is yes.