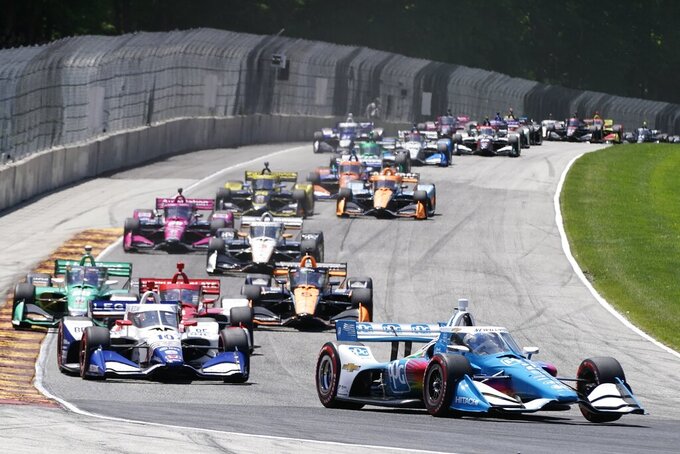 LEXINGTON, Ohio (AP) — There is nobody better than Scott Dixon at Mid-Ohio Sports Car Course, where The Iceman has a record six IndyCar victories and has only finished outside the top-10 twice in his career.

So he's the favorite to win Sunday, right?

Well, not so fast.

Dixon is mired in one of the longest losing streaks of his career — 21 races and counting, dating to early last season — and he's not won at Mid-Ohio since 2019. He's also slipped a notch in the Chip Ganassi Racing lineup, which boasts reigning IndyCar champion Alex Palou and current Indianapolis 500 winner Marcus Ericsson, who heads into Sunday's race as the IndyCar points leader.

Palou is ranked fifth in the standings and Dixon, the six-time champion and most accomplished driver of his generation, is sixth and trying to get into the title fight.

“We need to — I guess that is the obvious answer,” Dixon said of jump-starting his season. “I was hoping that the Indy 500 was going to be that turn and kick that we needed. It’s been an interesting year, lots of ups and downs and some missed opportunities.”

Dixon was the class of the field in May at the Indianapolis 500 and was dominating the race until he was flagged for speeding on pit road. The ensuing penalty crippled his shot at the win.

As the New Zealander worked through the emotions of that defeat, his name suddenly surfaced in a blockbuster free agency rumor. Zak Brown, the head of McLaren Racing, has long coveted Dixon and word spread after Indianapolis that Brown was trying to lure Dixon away from Ganassi with the promise of a leadership role at Arrow McLaren SP.

Dixon, who turns 42 later this month and is the fourth oldest full-time IndyCar driver, said he has not talked with McLaren. It's possible his management has fielded an offer, but Dixon is staying above the fray.

"A lot of people talk. I even got a few messages from people asking about the same thing,” Dixon said. “If people are having these conversations, I haven’t been a part of them. I love doing what I’m doing and being part of the team that I’m with. Who knows what comes in the future, but as of right now, I’m just focusing on this season. That’s all I’ve got to say. There’s really nothing to it.”

Dixon does have a career timeline he'd like to follow. His 51 career victories ranks third all-time, one win behind Mario Andretti for second, and he is one championship away from tying A.J. Foyt's mark of seven.

“Honestly, I don’t see anything changing in what I’m doing currently for the next five years at least,” said Dixon, who enjoys the Ganassi lineup that also includes seven-time NASCAR champion Jimmie Johnson.

“I think that the balance as far as we’ve got there, I think, has worked really well, and I think if you look at how competitive the team has been, sure, there’s always areas that we can improve on, and trust me, we’re working as hard as possible to make that possible,” Dixon said. “I love the dynamic right now. It’s a lot of fun, it’s a great group and they’ve already achieved one goal this year and that’s to win the Indy 500. Hopefully we can capture that second goal of the championship.”

Ganassi recently said he expects his four-car lineup to return in 2023, an indicator that things are progressing with Johnson on a third year in IndyCar. Johnson said Friday that the return of the No. 48 next season is still a work in progress.

“Status quo — I saw Chip's comments and thought that was a very PC way to say that everything is staying the same,” Johnson said. “I share the same thought. We all hope, that's the intent. A lot of sponsors, you can talk to them and it takes until October or November before some decisions are made. I certainly hope it doesn't go that deep.”

With every new free agency rumor, Felix Rosenqvist couldn't help but wonder where he might land and if he had any shot at keeping his job at Arrow McLaren SP.

He's going to be a McLaren driver next year but the Swede doesn't know where he'll be wearing the papaya orange. McLaren signed him to a multi-year contract extension but Zak Brown hasn't decided yet if Rosenqvist will return to his seat in IndyCar or headline its upcoming Formula E team.

Rosenqvist didn't want to reveal his preference for 2023, but he was mostly being polite because his ambitions are clearly to stay in IndyCar. He and teammate Pato O'Ward are good friends and the team is expanding next season to add Alexander Rossi in a third car.

Rosenqvist noted he's been on an uptick with four consecutive finishes of 10th or higher. He was fourth in the Indy 500.

“Without saying what I would prefer, I think bad results here would make Zak's choice easier,” Rosenqvist said.