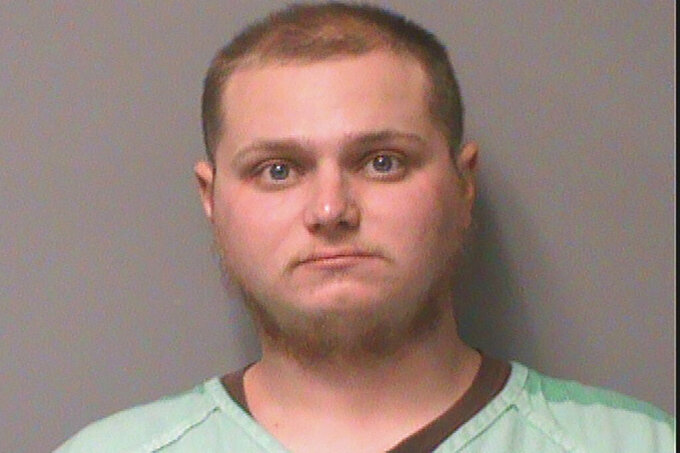 IOWA CITY, Iowa (AP) — Prosecutors have added five felony weapons and assault counts against a white man already charged with attempted murder for shooting into a car carrying four Black girls during a rally for President Donald Trump in Iowa.

The Polk County Attorney’s Office filed a formal charging document late Friday against Michael McKinney, 25, who has been jailed since his arrest hours after the Dec. 6 shooting near the Iowa Capitol in Des Moines.

In addition to attempted murder, the document charges McKinney with intimidation with a dangerous weapon, willful injury, assault while participating in a felony, reckless use of a firearm and going armed with intent. He could face decades in prison if convicted.

“They're throwing the kitchen sink at him,” said McKinney's attorney, Kent Balduchi.

Polk County Attorney John Sarcone declined comment on the new charges, which do not include any allegation of a hate crime.

Investigators say McKinney was wearing body armor and heavily armed when he participated in a car parade for Trump that went from the south side of Des Moines to the state Capitol.

Beforehand, Trump supporters had gathered for a rally featuring speeches from MyPillow CEO Mike Lindell and other activists who claimed the election won by Democrat Joe Biden was stolen through fraud and that Trump should get four more years in office. The rally was sponsored by Women for America First, the pro-Trump group that hosted the Jan. 6 rally in Washington, D.C., that preceded the attack on the Capitol.

At a state government parking lot, an angry confrontation broke out between the Black teenagers and a much larger group of Trump supporters. Witnesses and the teen driver's mother say the clash included racial and political taunts on both sides.

An investigator has alleged that a video broadcast on social media and shared with police shows McKinney approaching the girls' car, pulling a handgun from his waistband, and firing one shot into the vehicle from 15 feet (4.5 meters) away.

The bullet struck the leg of a 15-year-old girl in the passenger seat who was arguing with Trump supporters through the sunroof. She was sped to a hospital and survived her injuries.

Critics have questioned whether the shooting was racially motivated. McKinney has expressed support on Facebook for the far-right Proud Boys, a group linked to political violence, and criticism for Black Lives Matter activists. Police initially characterized the shooting as a traffic incident.

Sarcone noted last week that the strongest hate crime charge available under Iowa law carries only five years in prison. By contrast, each of the six charges that McKinney faces carry 10 or 25 years.

McKinney, an Army veteran and former Iowa National Guard member, told police that he fired in self-defense after the girls' vehicle reversed and struck a Trump supporter's pickup truck. McKinney's supporters have criticized the police and prosecutors for charging him, suggesting the driver was using her vehicle as a weapon rather than trying to flee the angry crowd.

Those who have raised money for his legal defense include Iowa Department of Public Safety administrative assistant Hollie Davidson, who helped organize the rally and who says the Capitol attack was justified because the voices of Trump supporters must be heard. The department hasn't responded to inquiries about Davidson, who answered her state phone on Friday before declining comment.

She and others had planned to hold a “Justice for Michael” protest to raise awareness for McKinney's case at the Iowa Capitol on Jan. 9, but they cancelled the event for safety concerns after the Jan. 6 insurrection.

“Michael and his family need us, and we cannot let the other side bully us anymore!” organizers had written in a Facebook page for the event, which they said would be rescheduled.