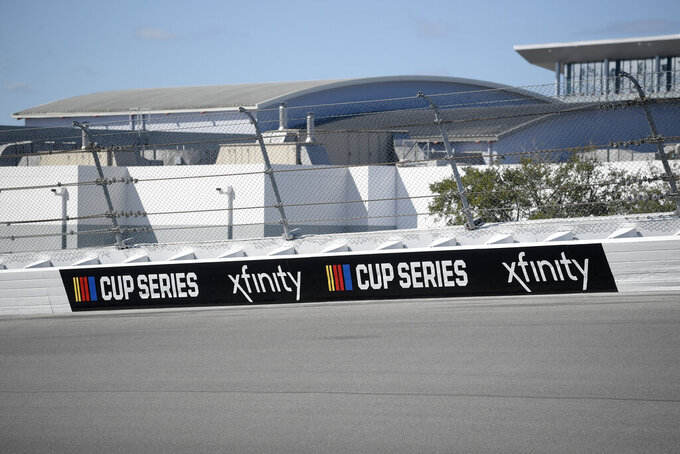 He hit play, absorbing every angle of the terrifying wreck that nearly killed him on the final lap of last year’s Daytona 500, and started to cry.

His emotional response had little to do with his wreck, which ended with his car flipping and skidding to a halt on its roof in a harrowing show of sparks and flames.

“Those are tears of respect and appreciation, not tears of sadness, because I was here and I was able to watch it and know that just down the hallway my kids were going to wake up,” Newman said.

Everyone watching feared the worst for Newman, but the 2008 Daytona 500 winner walked out of the hospital 48 hours later with his girls. He will drive the No. 6 Ford in “The Great American Race” on Sunday.

Newman now serves as a symbol of how far the sport has come since NASCAR’s darkest day 20 years ago, when seven-time champion Dale Earnhardt was killed in the final turn of the 500.

Earnhardt was the fourth national series driver killed in nine months. NASCAR never stopped after the deaths of Adam Petty, Kenny Irwin Jr. and Tony Roper, but losing Earnhardt forced the racing series to confront safety issues it had been slow to acknowledge.

The dramatic upgrades since have saved multiple lives — NASCAR hasn't suffered a racing death in its three national series since — and are the hallmark of Earnhardt’s legacy.

Talks of modernizing the car had been tiptoed around, and many drivers frowned on the confining head-and-neck restraints. Earnhardt's death changed everything.

— SAFER Barriers: The Steel And Foam Energy Reduction Barrier was designed to absorb and reduce kinetic energy during high-speed crashes. “Soft walls” have been gradually added to nearly every NASCAR track.

— HANS device: NASCAR mandated the use of head-and-neck restraints in late 2001. Drivers had resisted using the U-shaped neck restraint made of carbon fiber because they found it cumbersome and restrictive.

— Redesigned cars: NASCAR has developed three new cars since 2001, each one adapting to the latest technology. The newest “Next Gen” car was postponed to 2022 because of developmental delays caused by the pandemic.

Earnhardt Jr. was still wearing his fire suit when he sprinted into the hospital searching for his father that fateful afternoon on Feb. 18, 2001. A shy, third-generation driver trying to hold his own against his father, Earnhardt Jr. was in just his second season driving for Dale Earnhardt Inc.

At 26, he inherited his father’s rabid fanbase and expectations to be as good as the old man. Junior was hounded by comparisons — in demeanor and skill — and persevered through early insecurities to develop into a winner himself.

He drove six more seasons for DEI and won the first of his two Daytona 500s. But Earnhardt Jr. feuded with his father’s widow and moved to Hendrick Motorsports in 2008. DEI eventually folded.

Junior never equaled his father’s on-track success but blossomed into a NASCAR leader before concussions forced him to retire in 2017. He's currently an NBC Sports analyst and made peace with his father’s death long ago.

“I didn’t want to feel any negative feelings when I came here because I love Daytona, love this track and I love the history,” he said in 2018. “I want to be rooted in this sport and that means I want to be at Daytona when they race here. That was the choice I made a long time ago and feel very comfortable here.”

Even though the 49-year-old Earnhardt had given no indication of slowing down, Harvick's success in NASCAR’s second-tier series had team owner Richard Childress planning to promote him to Cup the following year.

Childress pushed Harvick into Earnhardt’s seat early, rebranding the No. 3 to the No. 29 to give Harvick his own identity. Yet Harvick struggled to escape Earnhardt’s shadow in the formative years of his Cup career.

Harvick eventually found his own path. He won the 2007 Daytona 500 driving for Richard Childress Racing and moved to Stewart-Haas Racing before the 2014 season. Harvick was rewarded for the bold jump with his only Cup championship and has been a perennial contender since.

Childress, now 75, was far more than Earnhardt’s car owner. They were hunting and fishing buddies, business associates and close friends.

“I miss those moments and so many things," Childress said. “It’s been tough, and not only tough on me and the family, I think on the race fans. I think a lot of them haven’t gotten over it yet.”

Earnhardt was the lynchpin of RCR, the team he joined in 1984 and where he won six of his record-tying seven Cup titles. After his death, RCR began to fade. Recent success has been limited to Childress’ grandson, Austin Dillion, who has three one-win seasons in four years.

Newman is the ultimate testament to NASCAR’s safety modifications. He missed limited time following the crash and is back for his 20th full season.

He realizes Earnhardt’s death saved his life. But he prefers to remember his childhood idol by what he accomplished before that 2001 season opener.

“I feel fortunate that my book, or at least that chapter, didn’t end that way for me," Newman said.