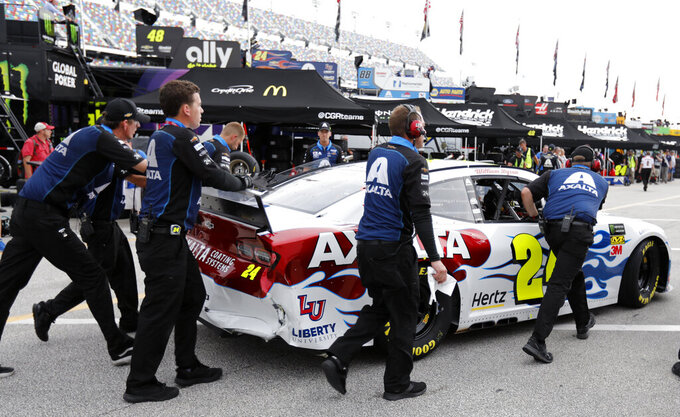 William Byron's crew pushes his car back to the garage after he was involved in a wreck during practice for the NASCAR Cup Series auto race at Daytona International Speedway, Thursday, July 4, 2019, in Daytona Beach, Fla. (AP Photo/Terry Renna) 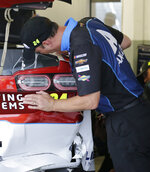 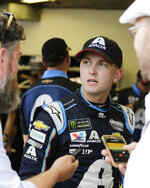 Keselowski was upset about Byron's blocking a year ago at Daytona and retaliated during the second of two practice sessions Thursday.

Byron's No. 24 Chevrolet sustained enough damage that his team switched to a backup car before qualifying and will have to start at the rear of the field for Saturday night's 400-mile race.

"I had a big run and put me in a position where I had to lift and I keep telling these guys I'm not lifting," said Keselowski, the 2012 Cup Series champion. "I hate it for his team that they have to work on their car and so do ours, but just trying to send a message that I'm not lifting."

Byron seemed to block Keselowski twice before the contact, once high and then again low. Keselowski hit Byron in the rear bumper when he turned in front of him again, causing Byron to slide sideways and nearly wreck. Byron managed to keep the car from spinning.

Byron said he knew exactly what prompted the incident.

"I was in the lead last year and he was second and I guess he felt like I threw a block," Byron said.

"I thought I was clear there, which obviously I was, and he just decided to kind of get me in the left rear and then really kind of gave us the damage on the right rear. It's practice, I get it, but I don't think that was really necessary to turn us.

"I guess it was kind of a message sent, but I still saved it. At least I didn't put it into the fence. No harm, no foul to us."

Keselowski said blocking has caused him to wreck in four of the last five races at Daytona. He was visibly upset after last year's July race, angered by Byron's block just before Ricky Stenhouse Jr. triggered a 25-car melee.

"They're all watching; they know," Keselowski said.

As for the practice session, Matt DiBenedetto posted the best 10-lap average around Daytona. DiBenedetto averaged 202.631 mph, one of 15 drivers to top 200 mph during a 10-lap period. Overall, 22 drivers topped 200 mph during their fastest practice lap. Martin Truex Jr. had the fastest lap, at 205.936 mph.