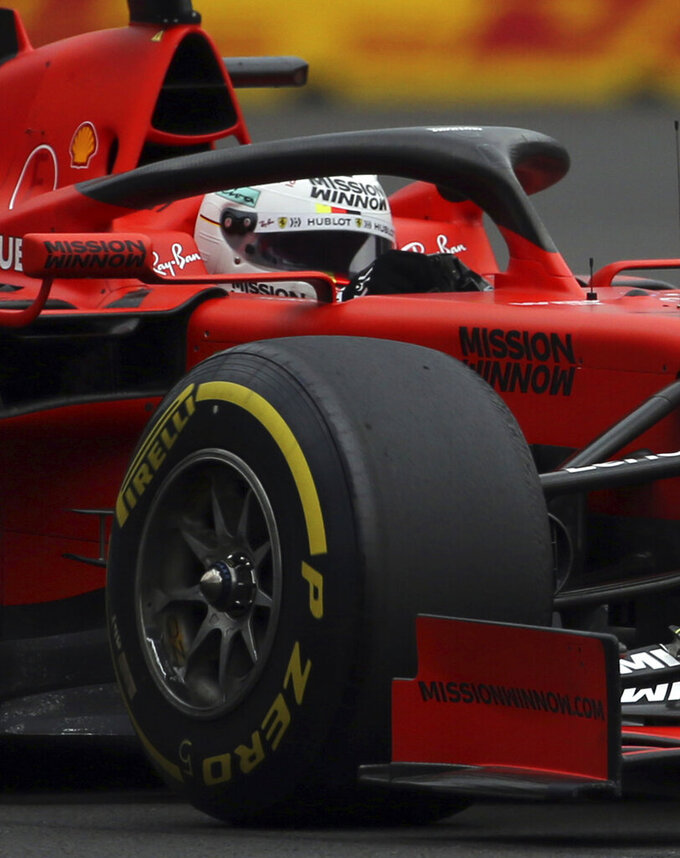 MEXICO CITY (AP) — Ferrari flexed the muscle that makes it a favorite to win the Mexican Grand Prix.

Two-time defending race champion Max Verstappen stayed close enough to look for a race-day counterpunch with Red Bull. But Lewis Hamilton's season championship with Mercedes may have to wait another week.

Sebastian Vettel posted the fastest lap of Friday's practice sessions as his Ferrari barreled down the long straight in the high altitude at the Autodromo Hermanos Rodriguez. Verstappen's Red Bull is exceptional through the track's slower corners — the sectors Vettel dubs the "twisty parts" — and was just 0.115 seconds off the pace to split Vettel and Ferrari's Charles Leclerc.

But being quicker in the corners may not matter in qualifying and on race day if Ferrari's gaping power advantage through the track's best passing zone is too much for Red Bull's Honda engine to overcome.

Saturday's qualifying will be a Ferrari affair,' Verstappen said, deeming the Italian team "miles ahead" in pure speed.

"I don't expect to fight (Ferrari) for pole. They're just too quick," Verstappen said. "There are not enough corners to make up the difference but we seem to be in the same speed range on the long runs. Now we just have to focus on the race where our pace looks more competitive."

Ferrari has claimed five consecutive pole positions and three victories since the summer break with a power surge Verstappen has called "insane."

Vettel isn't ready to claim another pole position just yet.

"I think it will be very, very tight," Vettel said.

Vettel and Verstappen started 1-2 in 2017 before Verstappen went on to win. Red Bull cars dominated the track in 2018 — from practice to race day — to a second straight win, but Verstappen came to Mexico downplaying his chances for a third.

Red Bull hasn't challenged for a win in the last five races, a span where Ferrari won three in a row before Mercedes won the last two in Russia and Japan.

Hamilton snatched the win in Russia, and he could clinch a sixth career season championship this weekend with a good race. But his afternoon session left him well adrift of the leaders back in fifth, one spot behind teammate Valtteri Bottas.

Hamilton led the morning practice but went backward in the afternoon as Mercedes spent much of the session monitoring race pace scenarios.

"It's not been a great day, but this is how it usually is for us in Mexico," Hamilton said. "And I didn't get a perfect lap in either."

Hamilton wins the championship Sunday if he finishes 14 points ahead of Bottas, the only driver still mathematically alive in the title chase. Bottas is a distant second in the championship, trailing Hamilton by 64 points with four races left.

A sixth career championship would put Hamilton just one behind the record seven won by Michael Schumacher. Hamilton clinched the 2017 and 2018 championships in Mexico City despite poor races.

Hamilton has to at least finish on the podium to close out the championship or it will extend to next week's U.S. Grand Prix in Texas. He has just one win in four races in Mexico City, and hasn't finished on the podium here since his 2016 victory.

Texas has been a much better race for Hamilton with five victories since 2012. Mercedes Team Principal Toto Wolff suggested Friday there is no plan to have Bottas back off Sunday.

"We don't want to interfere in their fight and will do our best to stay neutral as we've always been," Wolff said.