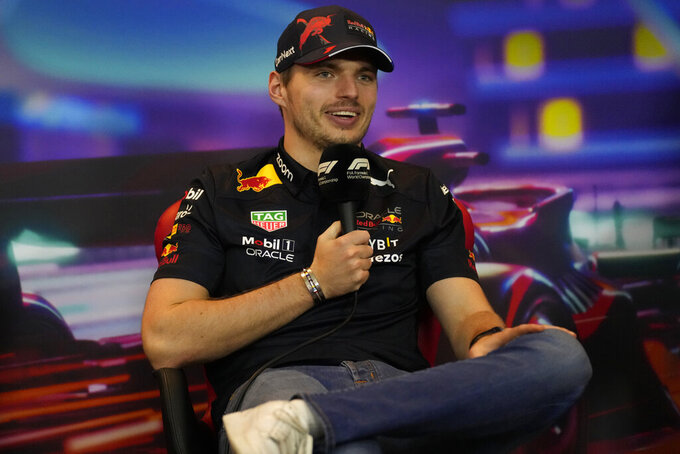 ABU DHABI, United Arab Emirates (AP) — Formula One champion Max Verstappen says he has resolved a conflict involving Red Bull teammate Sergio Perez and is prepared to help him at the last race of the season in Abu Dhabi.

Verstappen also hit out at what he said were unfair media reports and abusive messages aimed at his family on social media.

Last Sunday, he refused a team order to let Perez through for sixth place at the Brazilian Grand Prix and said on Thursday his reasons will “stay between myself and the team.”

“It was about something that happened earlier in the season and I already explained that (at the previous race in) Mexico and the team understood and agreed,” he said.

“Nothing had been said to me about a potential swap” of the positions in advance in Brazil, he said. “I think they should have known my response already from what had been said the week before.”

Since then, Red Bull has held talks to clear the air between the drivers, Verstappen said.

He has long since wrapped up his second world championship and Red Bull has sealed the constructors’ title. The team wants to earn second place in the standings for Perez ahead of Ferrari’s Charles Leclerc. Verstappen indicated he would be willing to help in Sunday's season finale in Abu Dhabi.

“As a team we have never finished first and second. So if we could achieve that, that would would be amazing," Verstappen said "And, for sure, if the opportunity is there to help, as a team, you know, we’re going to do that.”

Verstappen said he was unfairly vilified in media reports and he and his family faced social media abuse after the Brazil race.

“It’s pretty sickening, to be honest, being part of all that while, at the end of the day, I haven’t even done anything wrong. It’s just people misunderstood what was actually going on," he said.

Red Bull defended Verstappen — who could extend his record for wins in a season with a 15th victory on Sunday — as “an open and fair team player.”

“As a team we made some mistakes in Brazil," Red Bull said in a statement.

"We had not envisaged the situation that unfolded on the last lap and we had not agreed a strategy for such a scenario before the race.

“Regretfully, Max was only informed at the final corner of the request to give up position without all the necessary information being relayed. This put Max, who has always been an open and fair team player, in a compromising situation with little time to react which was not our intention.”

Red Bull said it accepts “Max's reasoning” about the incident and condemned abusive comments on social media aimed at both drivers, their family members and the team.

“Death threats, hate mail, vitriol towards extended family members is deplorable,” Red Bull added. “We value inclusion and want a safe space for everyone to work in and enjoy our sport. The abuse needs to stop.”

Asked if abuse ever led him to question his future in F1, Verstappen said: “It's not only related to that, to be honest, but I won't be here when I'm 40, that's for sure.”