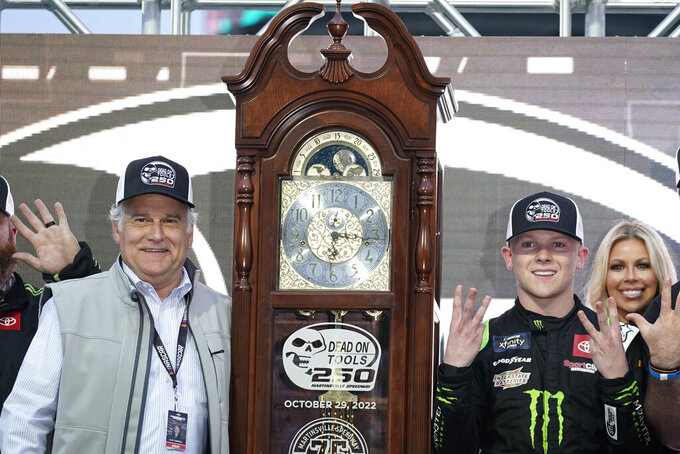 The fourth driver, Ty Gibbs, is a bit of a wildcard.

If Gibbs is willing to wreck a teammate to win a race, as he did last week at Martinsville, there's no telling what he might do with a championship on the line at Phoenix Raceway on Saturday.

The Xfinity season concludes at Phoenix Raceway's 1-mile oval, where Gibbs, Gragson, Josh Berry and Justin Allgaier are all vying for their first series championship.

Berry has bounced around various series and finished 17th as a rookie in 2021, his first full season in the Xfinity Series after running select races from 2014-17. The 31-year-old is in the playoffs for the first time.

Gibbs is in his first Xfinity playoffs, but has been successful early in his career. The Joe Gibbs Racing driver won his NASCAR debut in 2021 and has 10 wins in 50 starts. Gibbs also won the 2021 ARCA championship and will make his 16th Cup Series start Sunday while pulling doubly duty as an injury replacement while Kurt Busch is out with a concussion.

“There's a lot of great talent in this race,” Gibbs said.

Gibbs certainly has plenty of it. There's just a little extra that goes with it, as he's shown on and off the track.

Allgaier got into the winner-take-all finale when Gibbs wrecked teammate Brandon Jones out of the lead in the third overtime at Martinsville Raceway last week, drawing the ire of fellow drivers. The 20-year-old grandson of team owner and Hall of Famer Joe Gibbs didn't help himself during an interview after the race: “I always go back to the same verse, that Jesus was hated first and among all the people.”

Gibbs got in a fistfight with Sam Mayer after an Xfinity race and NASCAR fined him $75,000 for a Cup Series pit road incident that nearly sent Ty Dillon's car into personnel.

“Look, he’s my kid. I appreciate his aggression, but sometimes you got to pull back a little bit,” said Ty's father, Coy, the vice chairman at JGR. “This is a place where we need to pull back some.”

Gragson has been one of the most vocal drivers about Gibbs' aggressiveness, repeatedly calling him "little man" and saying there were 3 1/2 drivers racing for the championship.

“I can’t speak for these guys, but I listen to everyone’s post race interviews, see what they say, what they got to say. I listen to this press conference,” Gragson said. “And all I heard over and over is ‘Yeah, I didn’t mean to wreck him, I just meant to move him.’ It’s like, really? It gets annoying.”

Gragson and other title contenders aren't likely to get involved in an on-course scrap with Gibbs with a championship on the line, but Jones might. He's out of the title chase, thanks to his teammate, and is headed to JR Motorsports next season.

It should be an interesting race, no matter what happens.