Ricciardo eager to 'grow' at Renault after Red Bull exit 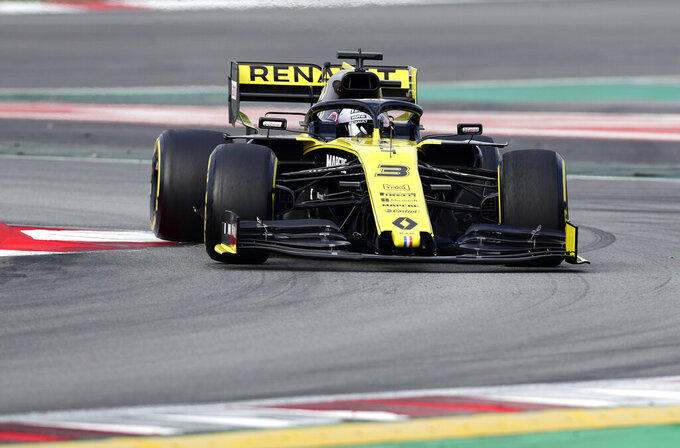 Instead, the amiable Australian exchanged a wave with the crew he had worked with for the five previous years.

"The Red Bull guys were waiting for gasoline when I was coming in the pits so they were all out there," Ricciardo said Tuesday after his second turn behind the wheel since joining Renault. "But I was like, 'I am not going to fall for it.' I actually waved as I drove past ... and they waved back."

Ricciardo started in Formula One with Toro Rosso — Red Bull's feeder team — in 2012 and joined Red Bull two years later when the team was coming off four consecutive world championships with Sebastian Vettel.

But an overhaul of the regulations opened the door for Mercedes to take over as F1's dominant force, leaving Ricciardo with a car that was able to win the occasional race — seven in all — but never sustain a serious title challenge.

So Ricciardo took the difficult decision last August to move to Renault for this season, despite it being considered a step behind Red Bull.

Now in Renault's yellow-and-black livery, Ricciardo said he made that choice to avoid the "risks" of staying put.

One was the decision by Red Bull to ditch its Renault-made engines for those of Honda, which made Ricciardo wary after the trouble McLaren had had with the Japanese partner.

The other was his fear of becoming frustrated for never meeting the high expectations with Red Bull.

"At Red Bull, every year it's like OK, this is probably going to be our year," he said. "I love that but ... the risk of being disappointed or let down is naturally higher.

"So from that point of view, I feel there's less risk coming into this because I feel there is more room for us to grow."

Red Bull finished third in the constructors' standings last season with 419 points. Renault was fourth, but far behind with only 122 points.

Ricciardo has had a subdued start with Renault through the first two days of testing near Barcelona. But he said Renault was not going full tilt with its power — yet.

On Monday, the opening day of the preseason, he and new teammate Nico Hulkenberg clocked the slowest times of the day, finishing more than 2.8 seconds slower than Vettel in his pace-setting Ferrari.

On Tuesday, Ricciardo's run was cut short when the rear wing of his Renault flew off, sending him off the track at the next turn. He did well to keep off the barrier.

The 29-year-old Ricciardo said that he looked forward to working with the 31-year-old Hulkenberg, after having had several run-ins with the much younger Max Verstappen at Red Bull.

Last season, Ricciardo and Verstappen crashed into one another at the Azerbaijan Grand Prix, and in 2016 Ricciardo called Verstappen's driving "amateur" after he bumped him off the track on the first lap of the Hungarian GP.

"I'm honestly just happy to be the younger driver in the team again," Ricciardo said. "I think (Hulkenberg) having done this so many years, I think that helps. ... There's less risk of someone losing their mind."