Person injured after police car drives through crowd at race 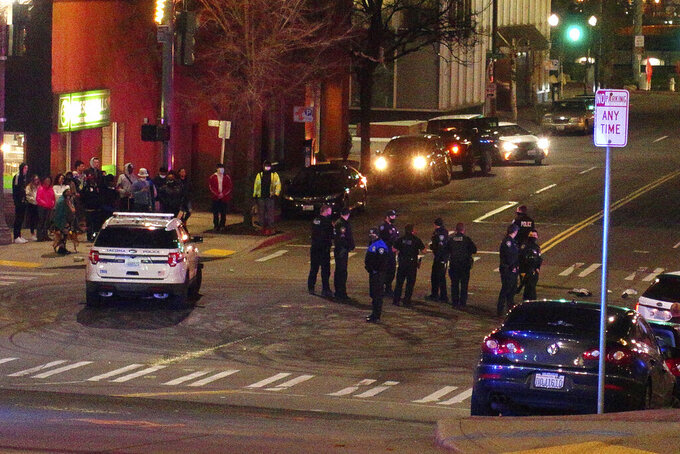 Tacoma Police and other law enforcement stand in a intersection near the site of a car crash Saturday, Jan. 23, 2021, in downtown Tacoma, Wash. At least one person was injured when a police car plowed through a crowd of people Saturday night who were watching a downtown street race, the Tacoma News-Tribune reported. (AP Photo/Ted S. Warren)

TACOMA, Wash. (AP) — At least one person was injured after a police car plowed through a crowd of pedestrians Saturday night who were watching a downtown street race, the Tacoma News-Tribune reported.

The incident happened just before 7 p.m. when a crowd of about 100 people watched several cars spinning in circles in a downtown street, police told the newspaper.

A police car arrived at the scene, then it drove through the crowd after people tried to block the vehicle, a witness said.

Video posted on social media show that the police car drives over something or somebody. Another video from the same scene and posted to Twitter appears to show the vehicle driving over a person on the ground.

Tacoma police spokeswoman Wendy Haddow told the News-Tribune that police were notified shortly before 7 p.m. Saturday of the street racers.

Haddow said the officer used his car’s bullhorn to address the crowd. The crowd then began pounding on his windows, she said.

That prompted him to speed out of the scene for his own safety, Haddow said.

One person sustained cuts in the collision and was taken to a nearby hospital, she said.

City Manager Elizabeth Pauli told the newspaper that the officer involved will be placed on leave. Pauli said the Pierce County Force Investigation Team will handle the case.