Penske's Will Power in tight title fight with no team orders 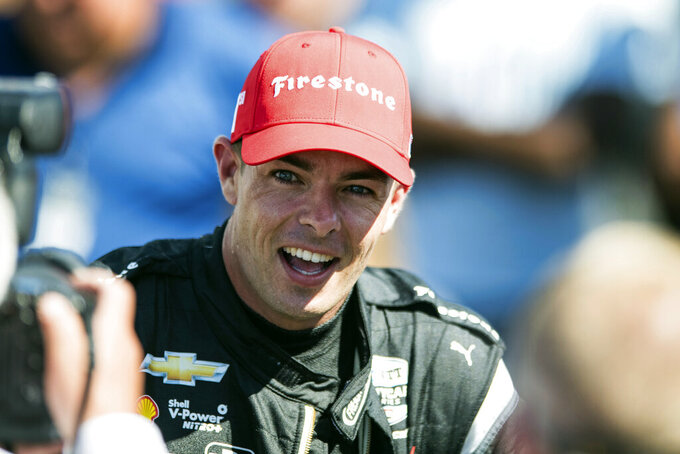 MONTEREY, Calif. (AP) — What's 10 points worth? That's what Will Power hopes he doesn't find out while trying to close out the closest IndyCar championship fight in nearly 20 years.

In all, five drivers mathematically have a shot and two contenders, reigning IndyCar champion Alex Palou and Pato O'Ward, were only eliminated last Sunday in IndyCar's closest title race since 2003 — when the Indy Racing League was called “The IRL."

But there are plenty of Power fans who believe the Australian could have had some breathing room in this title fight had Team Penske done him any favors.

McLaughlin last week dominated at Portland to win his third race of the season and Power finished second to retain his hold on the points lead. Power definitely did not have a car as good as McLaughlin's, but challenger Dixon was closing fast behind him in both the race and title fight.

If Team Penske had called for “team orders” and asked McLaughlin to cede the lead to Power, he'd have 10 additional points over Dixon and Newgarden. The call Dixon considered a “no-brainer” never came and now Power must finish no lower than third to clinch the title.

Those additional points could have taken some of the pressure off Power to be perfect on Sunday and helped him preserve the hold he's had on the championship three different times this season, including the last four races.

Even though Power was calling for the team orders over his radio at Portland, he knows that Team Penske has never used them and it's the fairest way to manage three individual teams.

“They’ve never done that. When you think about it, it would have been unfair on Josef to do that because if I was in his position, I would not be happy to be put 30 points back,” Power said Thursday. “ From a team perspective, it was a fair thing to do. It would be great to get 10 points. But yeah, Team Penske doesn't do that.”

Dixon and Ericsson are teammates at Chip Ganassi Racing and understand how the boss wants them to race.

“I think the thing Chip stresses is that you race clean, you race fairly, you help your teammates and you hope the organization wins,” Dixon told The Associated Press. He added that the Penske trio “do seem to race more singularly.”

It's a sensitive topic in that team orders are essentially manipulating both the outcome of the race with a focus on the championship picture. It is common in Formula One but typically not popular, and although it's been illegal in NASCAR since a 2013 scandal, teammates and manufacturer allies can and do often subtly help each other on the track.

It's not so clear-cut in IndyCar, and not always subtle: there's been wide speculation that McLaughlin allowed Newgarden to take the lead and the win after a late restart at Gateway last month. McLaughlin has said publicly that Newgarden, his close friend and co-host of their YouTube series, used “the slipstream effect” to pass him fairly.

Team Penske has weaved through the team orders issue since Sunday at Portland, while Dixon admits that Chip Ganassi Racing races with the greater organization in mind. And while Penske and Ganassi have teamed to win 14 of the last 16 IndyCar championships, nine have gone to Ganassi, including the last two.

Power, coincidentally, was on the losing end of three consecutive title races from 2010 to 2012 and finished runner-up twice to a Ganassi driver. He won his only title in 2014, his only Indianapolis 500 four years later, and has had to go head-to-head with his Penske teammates every year.

Coming off his the worst season of his 14 years driving for Roger Penske — Power had career lows in nearly every category and was ninth in the final 2021 standings — he's returned at top form.

He attributes it to now being 41 years old and a father, which have both mellowed many of his quirks and matured his approach to performance. Although he has only one win this season, Power has been remarkably consistent with an average finish of sixth and at Gateway tied Mario Andretti for most poles in IndyCar history with 67.

But he's been seemingly cast away at Penske, where the tight bond between Newgarden and McLaughlin has made Power the odd driver out of the cool club on a three-car team. Power wasn't really joking when asked about McLaughlin allegedly giving Newgarden the Gateway win and said “that's his best buddy, so he is probably going to do that.”

Penske team president Tim Cindric seemed irritated this week by the entire topic. He first dismissed Dixon's take as “a little mental game going on” with Power because “if you focus on last week, you’re not focused on this week."

Cindric, who is also Newgarden’s strategist, then brushed off the insinuation no team orders were called at Portland because padding Power's lead would have dropped both Dixon and Newgarden to 30 points out.

“That was never a consideration,” said Cindric. “From all-the-eggs-in-one-basket perspective, or Will versus Josef, no, certainly not. Not one of the considerations there.”

Cindric grew curt when, still on the team orders topic, he was asked if seeing Dixon drive into third at Portland didn't make him consider cycling Power into the lead.

“If we have another restart, Dixon passes both of them, then how do you feel?” he retorted.

Dixon explained the four drivers at Ganassi work as teammates and have some added help Sunday since Palou and Jimmie Johnson aren't racing for the title. It won't be the case at Penske.

“All of us have a general understanding that if there's a point you can help your teammate, that's what you are going to do,” Dixon told AP. “But I think their situation is a little bit different between Josef and Will. By all means, Josef will be trying to beat Will. I don't think there will be any help there. At all. No help at all from Josef.”

That's how it goes, Cindric insisted, with Penske's decision to run three championship-contending full-time cars. Newgarden has won a series-high five races this season, McLaughlin is next with three and Power's lone victory gives Team Penske nine victories through 16 races.

“When it comes to team orders, that type of thing, people forget that you have other obligations to other people aside from yourself,” Cindric said. "You have obligations to the driver, to your sponsors, to their families and all the rest on down the line. Those aren’t very obvious things, especially when you’re talking about whether someone wins a race or doesn’t win a race.

Mike Hull, Cindric's contemporary at Ganassi, said his drivers will race professionally with integrity. But he, too, shifted away from the team orders concept by pointing out that IndyCar, on pace for its most watched season since 2008, is the real winner come Sunday.

“Who wins here is IndyCar. With the success that IndyCar is having this year with the absolute strength that’s created in growth, they’re going to win,” Hull said. “It comes down to the quality teams racing with quality drivers. I think that’s a testament to how far the series has come in a very short period of time with its ownership and with the direction that its ownership is creating.”

IndyCar and Indianapolis Motor Speedway, where Ganassi won the Indy 500 this year with Ericsson, have been owned by Roger Penske since 2020.