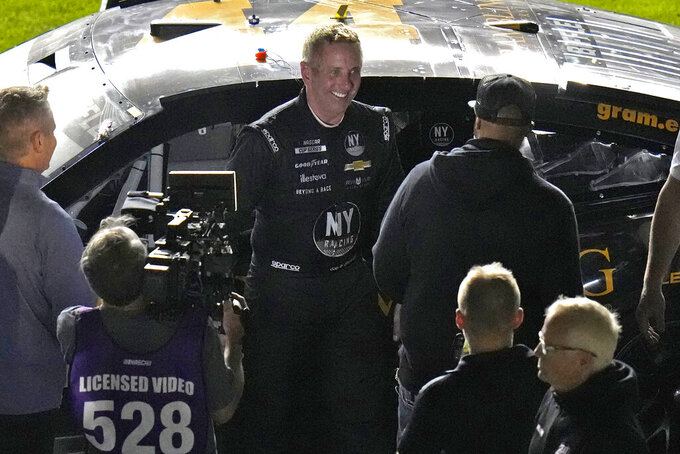 His effort ended in a fireball when Keselowski was involved in a last-lap crash while racing for the victory.

“I knew he was pretty sick and his prognosis was he wasn’t going to make it through the summer. I said, ‘Dad, we’re going to win the Daytona 500,’” Keselowski said. “It’s bittersweet that it didn’t happen while he was still alive.”

Bob Keselowski died in December, and his son is back at Daytona International Speedway still trying to fulfill his promise. Keselowski will try to snap an 0-for-12 streak in NASCAR's season-opening race with his new team.

He left Team Penske a month before his father died to join the ownership group of Jack Roush's organization. The rebranded RFK Racing team swept both Daytona 500 qualifying races to put Keselowski next to teammate Chris Buescher in the second row for Sunday's start. The wins Thursday night were the first in any race since 2017 for a Roush organization in need of Keselowski's engagement to return to the ranks of NASCAR's elite.

And, after a Hendrick Motorsports rout in Daytona 500 time trials, the Ford fleet has shown to be race ready. Ford drivers swept the first four spots in Thursday night's first qualifying race, then swept the top three in the second race.

“I’m excited internally for us, what we believe we have, the capability we have and the opportunity ahead of us for the rest of the weekend and the rest of the year,” Buescher said after Keselowski visited him in Daytona's victory lane.

The Ford camp absolutely has its strategy figured out for Sunday, when all its drivers are expected to work together to ensure a blue oval makes it to victory lane. That's proven to be the most effective approach among the manufacturers, but it's more important than ever this year as Sunday marks the official debut of NASCAR's new Next Gen car.

The car is designed to cut costs, help the smaller teams compete with NASCAR's powerhouse organizations, improve the on-track product and give the manufacturers more brand identity. But the Next Gen also provides an affordable entryway for potential new owners — two of whom will be part of the Daytona 500 for the first time:

— Floyd Mayweather Jr. is expected to be at the track when the boxer's No. 50 Chevrolet for The Money Team Racing makes its debut with Kaz Grala.

—- And businessman John Cohen got into the race with Greg Biffle, who, at 52, will be the oldest driver in the field when he makes the start for NY Racing.

Cohen and Mayweather are both Black and representative of NASCAR's push to increase diversity. Michael Jordan last year formed a team with driver Bubba Wallace, Pitbull joined an ownership group, and Cohen now has a partnership with the competition arm of NASCAR’s Drive for Diversity Program. NY Racing is hoping to build a full-time program around an up-and-coming Black driver.

And, on Sunday, Jusan Hamilton will become the first Black race director to call the Daytona 500 in its 64th running.

“I hope it sets a positive example for others that, regardless of race and background, if you work hard and have a mindset toward your goal, it is achievable,” the 31-year-old Hamilton said.

FanDuel lists both three-time Daytona 500 winner Denny Hamlin and reigning NASCAR champion Kyle Larson as the 19-2 race favorites. Larson, powered by Hendrick engines, will lead the field to the green flag following his pole-winning run on Wednesday. He'll start alongside teammate Alex Bowman, who earned a front-row start for the fifth time in his career, and Hendrick drivers have early control of the race for the seventh time in the last eight years.

Larson led a race-high 34 laps starting from the pole in his Thursday night qualifier before fading behind the Fords to finish seventh, two spots behind teammate Chase Elliott. Hamlin finished 15th in the second qualifier — far behind his organized Toyota teammates that finished fourth through seventh in the same race.

“There's good parity across the cars — we saw the Chevys were fast in qualifying, and in practices different cars, different teams and different (manufacturers) have been fast,” said Mark Rushbrook, global director of Ford Performance Racing.

Rushbrook also noted the strong showing from Keselowski and the “reenergized” RFK Racing group, which had lagged far behind other Ford teams and last qualified a driver for the playoffs in 2019.

“That team has been working so hard for so long, and they had success for so long,” Rushbrook said. “They've certainly had some hard years. To see the smiles (after the qualifiers), not just Jack Roush in victory lane ... they want to win on Sunday. They want to win through the rest of the season. I think they can do it.”

The race sold out more than a month in advance and NASCAR expects at least 120,000 spectators on Sunday. Daytona limited its spectators last season because of COVID-19, and the 2020 event four weeks before the pandemic shut down U.S. sports was its last packed house. Then-President Donald Trump was the grand marshal that day and Secret Service checks to enter both the garage and the fan zone created a bottleneck of irritated fans waiting in long lines.

First-year track president Frank Kelleher said the Daytona staff has worked closely with vendors to prepare for the race and participated in several job fairs to ensure it had a large enough workforce.

“We're not immune to the crisis when it comes to labor and supply chain,” said Kelleher, who noted the track hosted more than 160,000 in November for a four-day rock music festival. The Rolex 24 at Daytona last month was also problem-free.

“We've been hosting numerous job fairs and if you need 700 employees, let's make sure we have 1,000 on deck,” Kelleher said. “We're ready to roll this weekend.”