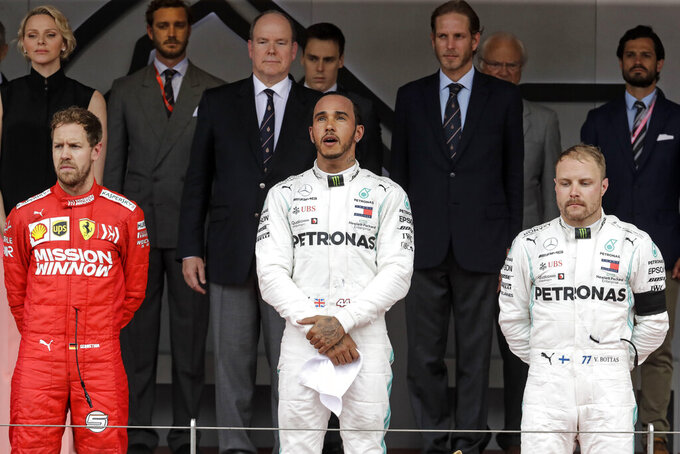 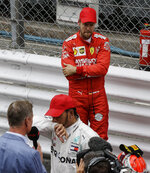 MONACO (AP) — Ferrari driver Charles Leclerc had predicted what might happen to him at the Monaco Grand Prix.

After his team botched his qualifying on Saturday and left Leclerc starting way down in 15th place on the grid, the 21-year-old driver said: "I'll have to take a lot of risks I think, even risking to crash."

He did just that on Sunday by barging into Nico Hulkenberg's Renault after 16 of 79 laps of his home race. It was a bold move by Leclerc, one which had come off just one lap earlier against Frenchman Romain Grosjean at the same point on the track — coming out of the turn at La Rascasse.

But on Monaco's pencil-thin and sinewy 3.3-kilometer (2-mile) track it was a gamble unlikely to pay off twice. Leclerc should know that better than anyone else, seeing as he grew up in Monaco and that his apartment is a stone's throw from Rascasse.

"Maybe I was a bit too optimistic," Leclerc said. "Starting from 15th it was just so difficult for a miracle to happen."

Leclerc, who is as self-critical as he is quick on the track, blamed himself.

"Nico left me a bit of space and then closed it, but I don't think it was his fault," Leclerc said. "It didn't go how I wanted, and how we all wanted."

Ferrari has not won in six races this season and has secured just one pole position, a brilliant one by Leclerc at the Bahrain GP in March.

Next up is Montreal in two weeks' time, where Leclerc seeks his first career win and Vettel looks to end a dismal spell of 14 races without one win dating back to the Belgian GP last August.

"Who's counting?" the four-time F1 champion from Germany said with a wry smile after the race.

Joking aside, Vettel knows Ferrari is lagging behind and Mercedes is heavy favorite to win its sixth straight constructors' and drivers' title double.

"We're not yet where we want to be. The pace isn't there. We didn't have the pace to put enough pressure on," Vettel said. "The car is lacking downforce. I don't think the car is as bad as it looks and results should be better. But it's difficult to get the car (prepared)."

Ferrari struggles to get its tire temperatures right, which in turn causes strategy errors, and the Italian manufacturer also loses more speed going into the corners than Mercedes because its car lacks enough grip.

"I think it's not a secret that after six races the tires are a bit more critical this year," Vettel said. "Currently we're too far away ... It's not where we want to be."

But Vettel is taking his share of the blame.

"I'm flattered by what Mattia's trying to say but we need to stick together, work harder," Vettel said. "I'm part of the team, so I don't put myself above (it). I've had some difficult moments this year where I'm fighting and not really entering the level where I feel more comfortable."