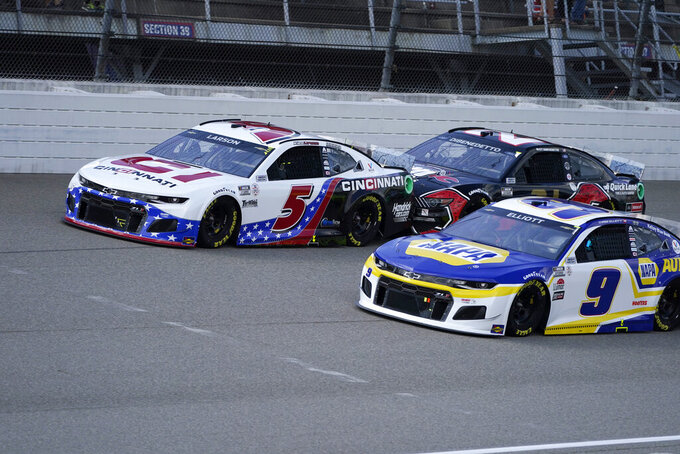 A surprisingly strong start to the playoffs for Joe Gibbs Racing — two races, two wins and two drivers locked into the second round — has put Hendrick Motorsports in a precarious position headed into the first elimination race.

Elliott is only 19 points to the good, which means a poor finish could make for a fast ending to his attempt at repeating as Cup champion. Four drivers will be cut from the 16-driver field after the race, and only Hendrick driver and regular-season champion Kyle Larson, as well as Denny Hamlin and Martin Truex Jr. on consecutive playoff-opening JGR wins, have secured spots in the second round.

But the field is at least tight — only 30 points separate Kevin Harvick in sixth from Tyler Reddick in 14th — and Bristol is the kind of track that can totally flip the standings. The .533-mile concrete bullring in northeast Tennessee can be a beast with progressive banking that goes from 24 to 28 degrees on a racing surface just 40 feet wide.

It's tight quarters, traffic can often be an impediment, and lack of patience or loss of tempers can easily alter the outcome.

“There’s not much difference between the good cars and the bad ones,” Byron continued. “It’s a very tough place to get around. It’s just the most unpredictable race of the (first) round.”

Bowman is 13th in the standings, the first driver below the cutline, but technically tied with Kurt Busch for 12th. Bowman has won a career-high three races this season, which at the start of the playoffs tied him with Truex Jr. and Ryan Blaney with second most to Larson's Cup-leading five victories.

But he's not been good enough through the first two playoff races. He was sixth at Bristol in the spring, but that race was run on dirt and delayed a day by dangerous rain and flooding.

Still, Bowman said he's confident at Bristol and has faith in the No. 48 team.

“I don’t think there’s a sense of urgency (but) I don’t think we expected to be in this situation," Bowman said. "We know we need to go execute and go have a good day. We know it’s not going to be easy by any means.

“But we also know that if something goes wrong and we don’t make it to the next round, there are still more opportunities for us to win races this year.”

It would take an upset not unlike his stunning Daytona 500 victory for Michael McDowell to advance out of the first round.

McDowell's shock victory to win NASCAR's season-opening version of the Super Bowl earned him his first career playoff berth, but his Front Row Motorsports team is the underdog and its showed.

A crash to open the playoffs at Darlington and three speeding penalties and a 24th-place finish at Richmond has McDowell last in the standings and in need of another improbable victory to advance. He likes Bristol, but in 21 career starts has an average finish of 30th.

Bubba Wallace will have a new crew chief starting at Bristol as 23XI Racing has made the early move to push Mike Wheeler into competition director.

Wheeler was always going to be the competition director for the new race team owned by Denny Hamlin and Michael Jordan, but also spent this season atop the box for Wallace. With 23XI expanding to two cars next year with Wallace and Kurt Busch, Wheeler will now focus on his main role.

Bootie Barker will be Wallace's crew chief beginning this weekend.

One of Kaulig Racing's sponsors won't be expanding next season alongside the organization, and the decision by Nutrien Ag Solutions potentially changes some 2022 plans.

Nutrien AG is in its third season of sponsorship and funds 19 Xfinity Series races for Jeb Burton. If that sponsorship isn't replaced, Kaulig could drop one of its three Xfinity programs as the team adds a pair of Cup teams.

Burton, who scored his first career NASCAR victory with an Xfinity win at Talladega earlier this year, could also have his role redefined at Kaulig. If he's not retained in the Xfinity Series, he could have a shot at driving the second Cup car that Kaulig will field as a “trophy hunter” driven by specialists.

Kyle Busch is the 21-5 to favorite to win Bristol, per FanDuel. Busch has eight career Cup wins and teammates Denny Hamlin and Martin Truex Jr. won the first two playoff races.... All four drivers who entered Bristol below the cutline last year failed to advance to the second round of the playoffs.