Bahrain and Vietnam GPs off because of coronavirus outbreak 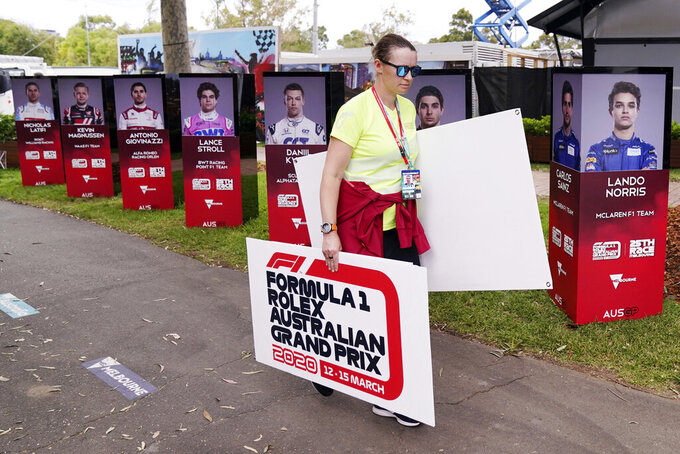 A woman takes away signs after the cancellation of the Australian Formula One Grand Prix in Melbourne, Friday, March 13, 2020. The first F1 Grand Prix of the season was canceled two hours before the first official practice was set to start Friday after organizers relented to pressure to call it off amid the spreading coronavirus. (Michael Dodge/AAP Image via AP)

PARIS (AP) — The Bahrain and Vietnam Grand Prix races were postponed Friday because of the coronavirus outbreak, the third and fourth races of the Formula One season to be called off.

Bahrain was scheduled for next week — at an empty track — and the inaugural Vietnamese GP in Hanoi on April 5.

Governing body FIA said in a statement that it will consider “the viability of potential alternative dates" later this year for Bahrain and Vietnam “should the situation improve.”

The season could start in the Netherlands, at the Zandvoort track outside Amsterdam, on May 3.

The season-opening Australian GP in Melbourne was called off as thousands of fans queued to get in for Friday's first practice session, while teams and drivers were packing up to leave.

“Formula 1, the FIA and the promoters have taken these decisions in order to ensure the health and safety of the traveling staff, championship participants and fans, which remains our primary concern,” the FIA said in a statement Friday.

Six-time F1 champion Lewis Hamilton, who needs one more title to equal Michael Schumacher's record of seven titles, said he was unhappy about by the situation but welcomed the decision.

“Sadly, this is the right decision," Hamilton wrote on Twitter. "No one wants this, we all want to get in our cars and get racing, but we have to be realistic and we have to put health and safety first.”

The Dutch GP returned to this year's calendar after last hosting a race at Zandvoort in 1985. The 22-race calendar for 2020 featured Vietnam's eagerly-awaited F1 debut.

“This has been a very difficult decision to reach,” Vietnam's GP Corporation said in a statement. “Our thoughts go out to all those directly and indirectly affected by the current coronavirus situation, as well as those for whom this announcement will be a disappointment as they looked forward to an exciting inaugural race."

The Chinese GP in Shanghai scheduled for April 19 was postponed on Feb 12.

There have been more than 128,000 cases and 4,700 deaths globally since the virus outbreak started late last year. Most people quickly recover from the virus after experiencing only mild or moderate symptoms, such as fever and cough. For some, especially older adults and people with existing health problems, it can cause more severe illness, including pneumonia.

Friday's late decision to call off the Australian GP hastened after McLaren withdrew because a team member tested positive for the COVID-19 illness.

Even before the cancellation was announced, Hamilton's Mercedes team sent a letter to the FIA and F1 requesting it be called off and had commenced preparations to leave.

McLaren's withdrawal was ultimately the catalyst. That person and 14 other McLaren team members have been placed in quarantine in a Melbourne hotel for 14 days.

Members of the U.S.-backed Haas team were in isolation but were cleared after tests.

“The global situation regarding COVID-19 is fluid and very difficult to predict and its right we take time to assess the situation and make the right decisions," F1 chairman Chase Carey said. "The Bahrain Grand Prix is an exciting race in our schedule, and we look forward to being back there as soon as we can. We are also looking forward to Vietnam’s inaugural race and bringing the spectacle of F1 to one of the most exciting cities in the world.”