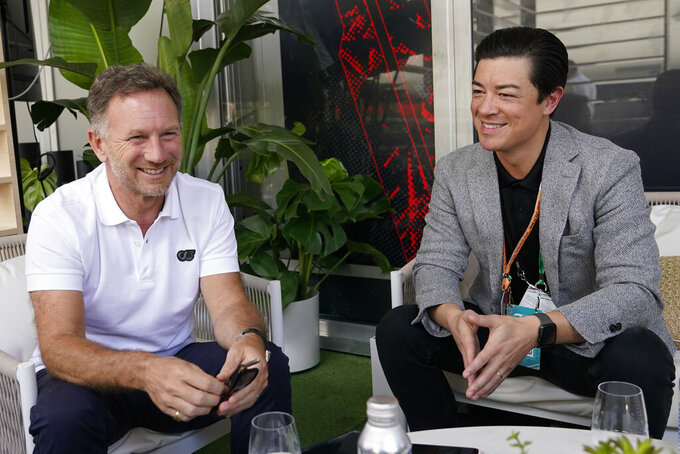 Red Bull team principal Christian Horner, left, speaks with with Keith Sheldon, president of entertainment of Hard Rock International, right, during an interview in advance of the Formula One Miami Grand Prix auto race at the Miami International Autodrome, Thursday, May 5, 2022, in Miami Gardens, Fla. Hard Rock International, which is headquartered in Davie about 10 miles from Hard Rock Stadium, announced a multi-year sponsorship deal with Red Bull on Thursday as drivers arrived ready to walk the purpose-built venue. The race is Sunday. (AP Photo/Lynne Sladky)

MIAMI GARDENS, Fla. (AP) — Red Bull scored a victory even before the inaugural Miami Grand Prix weekend by landing another billion-dollar American company as a sponsor — a boon as teams scour the fertile U.S. commercial market that has gone mad for Formula One.

Hard Rock International, which is headquartered in Davie about 10 miles from Hard Rock Stadium, announced a multi-year sponsorship deal with Red Bull on Thursday as drivers arrived at the venue. The Miami Dolphins are hosting 85,000 people a day Friday through Sunday, when F1 will debut in Miami and race around the stadium in the first of two events in the U.S. on this year's calendar.

Red Bull has pounced on the opportunities in America and now has signed two major U.S. brands since Max Verstappen won the world championship in December. Red Bull in February signed a $500 million title sponsorship deal with Oracle, the Texas-based technology giant. It is believed to be among the most lucrative commercial deals in sports.

Christian Horner, Red Bull team principal, said only “enough” when asked by The Associated Press the value of the deal with Hard Rock. The agreement makes Hard Rock an official team partner, and it includes Hard Rock's hotels, restaurants and casino resorts.

Horner acknowledged the expanding U.S. market, which has exploded amid the popularity of the Netflix docuseries “Drive to Survive.” The series, now in its fourth season, has been renewed for two more seasons.

F1 didn't race in the U.S. for four years following its pullout from Indianapolis Motor Speedway in 2007; Circuit of the Americas in Austin, Texas, brought the series back in 2012 and Miami marks a previously unheard of two races in the U.S.

Next year it will be three: F1 in March announced a 2023 night race down the Las Vegas Strip.

“Formula One is going through a tremendous period and suddenly has become available to a whole new demographic,” Horner said in an interview with AP in the Red Bull hospitality paddock. "I think things like 'Drive to Survive have ignited a huge amount of interest in the U.S., and every race is box office (sold out). The product is strong."

He called the pairing with Hard Rock “the most logical partnership we've ever had,” because Red Bull shares so many brand characteristics with the entertainment brand. Sheldon agreed.

“That energy that Red Bull creates is something that we want to associate our brand with, and it doesn't hurt that they are winning a ton of races and reaching a younger demographic," he said.

“There's so many people who weren't familiar with F1 and all the great things happening just five years ago,” Sheldon said. “That series really amplified and ratcheted up what F1 is all about, especially for a localized audience in North America. We see that as an important bullet point in this deal.”

Verstappen and Red Bull teammate Sergio Perez are ranked second and third in the standings, and Verstappen has won two of four races headed into Sunday. The Hard Rock deal gave Red Bull the edge in showing how teams are capitalizing on their new popularity in corporate America.

“I think partners are seeing the offering in what we have to provide, and it’s not just a sticker on a car,” Horner said. “It’s about what happens behind the scenes. It’s all the activations for all your stunts, all the promotions that we’ll be doing. It’s mind-boggling what could be dreamt up.”

Horner noted Red Bull is hosting Jak Crawford, a 17-year-old Texan and part of the Red Bull Junior Team. Crawford races Formula 3 races and had a double-podium outing recently at Imola but in Miami is an official guest of the team.

Horner said Crawford is considered a Red Bull investment as almost all teams are scouting American talent. But Red Bull won't promote an American simply to capitalize on the market.

“Just to have an American driver is not enough,” Horner said. “It's got to be a winning driver. It's got to be a driver who is running up front. When you look at the effect that Max Verstappen has in Holland, or Fernando Alonso has in Spain, you've got to have someone in a winning car with a winning ability.”