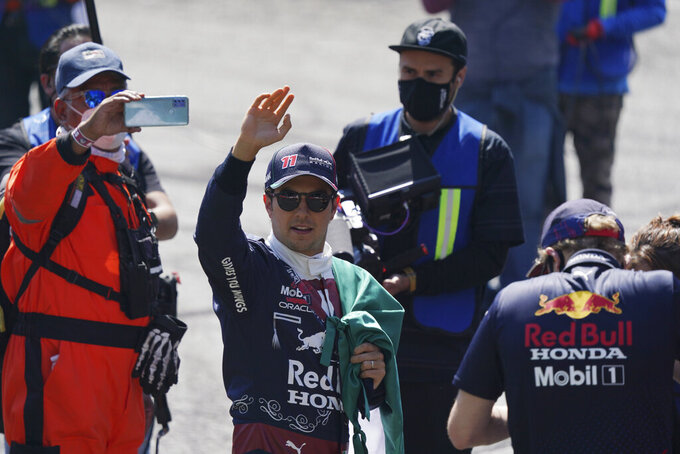 MEXICO CITY (AP) — The Mexican Grand Prix isn't until Sunday and Red Bull is already facing a hypothetical dilemma: Whether Sergio Perez would be told to pull aside at his home race to let teammate and championship leader Max Verstappen win.

“I want to win, man. I think it would be a great problem to have,” Perez said Thursday. “If there is a race they want me to win, it's this one."

Yet it's Verstappen who leads Mercedes' Lewis Hamilton by 12 points with five races left. Red Bull will likely have to consider team orders because the Autodromo Hermanos Rodriguez is expected to strongly favor their two cars.

Verstappen won here in 2017 and 2018 and likely would have won again in 2019 if not for a starting grid penalty and then a tire puncture on the second lap. Hamilton, who won in 2019, conceded Red Bull had the superior car that day and that he was “lucky” to win. The Mexican Grand Prix was canceled in 2020 by the pandemic.

Perez returns to his home race in peak racing form after consecutive podium finishes in Turkey and the United States. He even briefly flirted with the pole position in Texas. He's expected to compete for the pole and a race win in Mexico.

Asking him to pull aside for Verstappen in front of a massive home crowd of more than 100,000 that adores him would be a tough call for Red Bull.

“It's a very special venue for us,” Perez said. “I don't see much point in discussing that now ... I think probably we'll see where we are on Saturday (after qualifying). There's no guarantee we're going to be in that position. Right now, we haven't discussed anything.”

“I want you to win,” Ricciardo told him.

Aston Martin driver Sebastian Vettel, a four-time champion who had his own disputes over team orders when he raced with Red Bull years ago, said Perez should be allowed to race to win. Vettel sparred with former teammate Mark Webber when Vettel ignored team orders to let Webber win in 2013, the last year Vettel won the championship.

“I would be in favor of not having team orders, ever," Vettel said. “If Checo happens to be ahead, he should stay ahead.”

Hamilton denied any suggestion he would engage in a championship-deciding collision with Max Verstappen if the title chase goes into the final race of the season.

Mercedes Team Principal Toto Wolff suggested such a scenario would be possible in an interview published this week in the Daily Mail, comparing it to the 1989 and 1990 seasons when crashes between Aryton Senna and Alain Prost impacted the championship.

Hamilton, a seven-time champion, said Thursday he had not read Wolff’s comments and insisted he would only try to win a record eighth title “the right way.”

Verstappen and Hamilton have already collided twice this season in Britain and Italy. The first time knocked Verstappen out of the race and Hamilton won. The second second incident took out both cars.

Hamilton suggested Verstappen may be feeling pressure in his quest for a first championship, calling the 24-year-old Dutchman “a youngster” even though Verstappen has been racing in F1 since he was 17.

Verstappen said that's not the case.

“I like what I’m doing, you know? So that takes the pressure off," Verstappen said.

Verstappen also dismissed Wolff's comments about the fight for the title.

“I don’t really think about previous historic fights between two drivers, what they have done – that’s the past," Verstappen said.

Alfa Romeo's Italian driver Antonio Giovinazzi said the team hasn't told him yet whether he will return in 2022. His is the only still still to be determined for next season. His current teammate, Kimi Raikkonen is set to retire and will be replaced by Valtteri Bottas, who is in his final season with Mercedes.

“Hopefully we know good or bad news soon," Giovinazzi said. "The only thing I can do is drive fast in the car.

Giovinazzi is in his third season with Alfa Romeo. His best finish was this season was 10th.