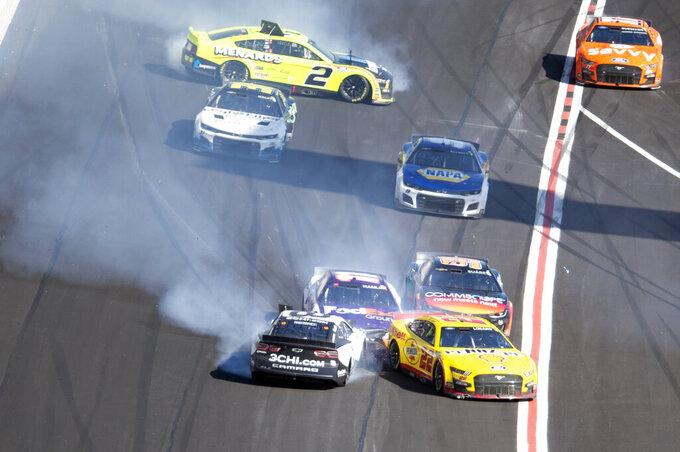 FORT WORTH, Texas (AP) — What a weekend for motorsports, the bit player on the massive stick-and-ball sporting landscape so eager for its own time in the spotlight.

The past four days belonged to college basketball, with its three weeks of March Madness and busted brackets that have become engrained in American sports culture. Car racing? A distant afterthought.

And yet motorsports managed to hold its own. From Atlanta to Bahrain, Fort Worth and Florida, the headlines never stopped.

NASCAR is taking the Next Gen to Le Mans!

The NASCAR race in Atlanta was insane!

Ferrari is back! And Haas wasn't the worst team in Formula One!

Each series shone in its own right on a weekend of dominating performances. Ferrari pulled off a 1-2 sweep of the F1 season opener in Bahrain. Hendrick Motorsports won its third NASCAR race of the year with its third different driver in Atlanta.

IndyCar was dominated by Team Penske and Chip Ganassi Racing, which took the top seven spots at Texas Motor Speedway. Josef Newgarden passed teammate Scott McLaughlin in the final turn to snatch the 600th organizational victory for Roger Penske, who has opened 2022 with a win in the Daytona 500 and the first two IndyCar races of the year.

Ganassi, by the way, won the Twelve Hours of Sebring in Florida — a victory celebrated both for its prestige and the feat accomplished by the lead engineer of the race-winning car. The victory by the No. 02 Cadillac was the first for Danielle Shepherd, winner of a pair of IndyCar championships as a team engineer and now the lead on Sebring's winning car.

A look at the motorsports weekend:

This is where it all kicked off with the bombshell announcement that NASCAR hopes to take its Next Gen car to the 24 Hours of Le Mans next year in a special project with Hendrick Motorsports.

The “Garage 56” entry allows NASCAR to work with Hendrick and Chevrolet on a souped-up version of its seventh-generation race car for one of the biggest races in the world. The one-slot entry at Le Mans highlights innovation and technology, and should NASCAR earn the 2023 invitation — it seems a formality — the good ol' boys from stock cars will head to France for the first time since 1976.

The World Endurance Championship opened its season at Sebring with much of the top talent in the world participating, and then IMSA closed the weekend Saturday when Ganassi claimed his second victory in the 12 Hours of Sebring with Earl Bamber, Alex Lynn and Neel Jani.

Observers insisted Ferrari made the most offseason improvement, and this will be the year the team wins its first championship since Kimi Raikkonen in 2007.

Ferrari didn't disappoint with a 1-2 finish by Charles Leclerc and Carlos Sainz Jr. Yes, expectations were high for Ferrari, but in actually holding off Mercedes at the same time reigning champion Red Bull was imploding, it was indeed “Mamma Mia!" as Leclerc screamed as he crossed the finish line.

But, oh, boy, wasn't that something with American team Haas?

Haas was the laughingstock of Formula One all of last season, a team sucked into Russia's invasion of Ukraine because both its sponsor and driver were Russian. So many people wished Haas would just stop driving and sell the team to Michael Andretti.

Instead, Haas seems to have emerged better from last year.

Kevin Magnussen was supposed to be driving at Sebring on Saturday in Ganassi's winning car. Instead, the F1 team that fired him at the end of 2020 called at the last minute and offered him his old seat after Haas dumped both driver Nikita Mazepin and sponsor Urakali.

Magnussen wound up finishing fifth and teammate Mick Schumacher was 11th on Sunday. Haas was last on the grid in almost every session last season, and in overcoming the many crises brought on by its Russian ties — Sunday was also bolstered by the much-improved engines Haas receives from Ferrari — the Americans might not be the joke of the grid this year.

It was a battle at Texas Motor Speedway, the track that has hosted IndyCar since it opened in 1997 but faced an expiring contract after hosting the series for a 35th time.

Texas has been terrible for IndyCar since the track applied a traction compound to its turns to accommodate NASCAR. The slick PJ1 at the top of the track was too dangerous for IndyCar, so it’s now one long parade line at the bottom as drivers avoid the top for fear of crashing. Dwindling attendance and frustration over the lousy IndyCar races at Texas had threatened to make Sunday's race the final in the long partnership between the two.

Speedway Motorsports, owner of Texas, already may have decided it was done with IndyCar even before the race based on the lack of advertising and promotion in the fifth-largest market in the United States. On both days of the event, it seemed Texas officials did little more than unlock than gates for IndyCar to use its facility.

But IndyCar worked hard to put on a good show and seven drivers volunteered for a special Saturday practice session designed to create a second racing line on the track. It was risky and not entirely successful — some drivers still crashed directly into the outside wall when they drifted into the slick second lane, but others made it work, and it's where Newgarden made his winning pass.

Now IndyCar is hopeful it showed Sunday that its storied partnership with Texas should continue beyond this year.

As an added bonus? Jimmie Johnson, the seven-time NASCAR champion and seven-time winner at Texas in a stock car, finished sixth in his oval debut as an IndyCar driver. His drive was so solid, there are some who now believe he can contend in the Indianapolis 500.

Speedway Motorsports also owns Atlanta Motor Speedway, host this weekend of NASCAR and clearly where the company focused most of its attention.

Atlanta was reconfigured ahead of the race with new pavement and steeper banking, and the remodeling created frenzied pack racing and a finish that looked a whole lot like a white-knuckled race at either Daytona or Talladega.

There were 46 lead changes among an Atlanta-record 20 drivers, and nine crashes created a race that ran more than four hours.

In the end it was William Byron who held off a freight train of traffic to win his third career race. The victory was the third in five races for Rick Hendrick, who got wins from reigning champion Kyle Larson in Fontana, Alex Bowman in Las Vegas and now Byron in front of the biggest Atlanta crowd in at least a decade.

NASCAR races next week at Circuit of the Americas in Austin, Texas, where Chase Elliott is the defending race winner. He ia the only Hendrick driver yet to win a Cup race this year.