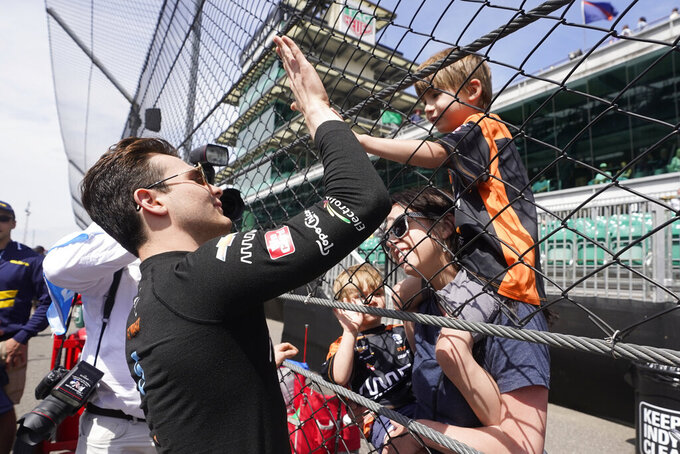 INDIANAPOLIS (AP) — The Indianapolis 500 will be presented by Gainbridge for the next several years in a multi-year contract extension announced Wednesday with the online investment platform.

Gainbridge is an Indianapolis company that in 2019 became presenting sponsor of the most iconic motorsports race in the world. The initial partnership was a four-year deal. Gainbridge CEO Dan Towriss would not reveal terms of the extension.

Gainbridge’s influence is all over Indianapolis Motor Speedway and the city. What started as sponsorship of one race car simply to have it on display during an LPGA golf event has grown into one of IndyCar’s largest partnerships.

In addition to the presenting role of the Indy 500 on Sunday, Gainbridge is the primary sponsor for Andretti Autosport driver Colton Herta. The company has the naming rights to Gainbridge Fieldhouse, home of the NBA’s Indiana Pacers, and is a founding partner of the Miami Grand Prix Formula One race held earlier this month. Gainbridge also hosted a party in Nashville last year for IndyCar’s new downtown race.

Towriss, an Indiana native, didn’t attend his first Indy 500 until 2011 but has steadily gotten hooked on racing. Gainbridge falls under the umbrella of parent company Group 1001, and as CEO and president of Group 1001, Towriss has joined the group of backers behind Michael Andretti’s effort to land an F1 team.

As for writing a check to become the presenting sponsor of a race more than century old that is almost never referred to with Gainbridge in the title, Towriss said the marketing spend has been a worthwhile investment.

“We love it, it’s a great event, we feel the momentum building behind the Indy 500,” Towriss said in an interview with The Associated Press. “But also we have a tremendous partnership with Penske Entertainment. It’s given us access to build relationships and partners here through other sponsors or race teams. We get a lot of brand recognition and we need that brand awareness and credibility.

“We’ve seen that when someone buys something online and we ask, ‘Where did you hear about us?’ the Indy 500 comes up, and we see traffic that coincides with the race, or spikes when Colton Herta wins.”

The extended sponsorship with the Indy 500 led to a creation of a new logo for the 2023 race that is a representation of the famed oval. Since Gainbridge came aboard in 2019, the logo has featured Indy’s bricks, the checkered flag, the Pagoda and the winner’s wreath. The contract extension will lead to more icons in upcoming logos.

“Gainbridge is fully invested in racing as a vehicle for brand growth and understands the unique and global platform the Indianapolis 500 provides,” said Mark Miles, the president and CEO of Penske Entertainment. “We’re excited to continue this mutually productive relationship between two innovative and trusted partners in their space.”