Fans and flags under scrutiny as NASCAR heads to Talladega 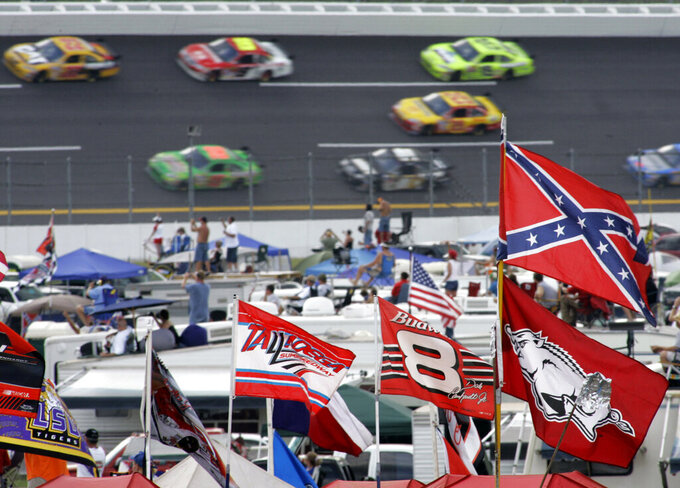 FILE - In this Oct. 7, 2007, file photo, a Confederate flag flies in the infield as cars come out of Turn 1 during a NASCAR auto race at Talladega Superspeedway in Talladega, Ala. NASCAR banned the Confederate flag from its races and venues Wednesday, June 10, 2020, formally severing itself from what for many is a symbol of slavery and racism. (AP Photo/Rob Carr, File) 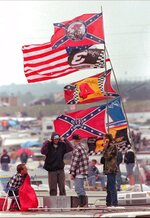 The heat is on at Talladega Superspeedway, and not just for the drivers at a track known for high-speed chaos.

It is another test run for security and safety protocols as fans start to return in limited numbers. NASCAR is permitting up to 5,000 fans and, officials hope, zero Confederate flags into Sunday’s Cup Series race along with 44 motor homes.

Fans will undergo health screenings before entering the track and be required to wear masks and asked to maintain six feet of social distancing. Other sports organizations and leagues will likely be watching how NASCAR and Talladega handle the event since fans have been virutally barred from every sporting event in North America for more than three months because of the coronavirus and positive tests are on the rise in scattered places across the country.

NASCAR is also hoping to allow as many as 30,000 fans into Bristol Motor Speedway in eastern Tennessee for next month’s All-Star race, which would be a dramatic increase from the first fans — about 1,000 of them — allowed into a race earlier this month near Miami.

“They want to be out front,” said James DeMeo, who runs Unified Sports & Entertainment Security Consulting and is an adjunct instructor at Tulane and Mercer. “Nobody wants to be that organization that’s known for not properly safeguarding patrons at these types of events.”

Talladega and its normally crowded, sometimes raucous scene will have a decidedly different feel. Fans won’t be allowed to enter the infield and there won’t be any tailgating allowed outside the grounds before, during or after the race except for customers who bought admission for the RV sites on the Alabama Gang Superstretch. The 5,000 fans inside will be scattered around the front stretch grandstands and towers at a track that can hold about 80,000.

The coronavirus isn’t the only new security issue in Talladega. NASCAR has banned display of the Conferederate flag from its events and facilities, but hasn’t outlined how it will enforce the rule.

“It’s banned and hopefully fans will comply and, if not, we’ll deal with that,” said Steve O’Donnell, NASCAR’s executive vice president and chief racing development officer.

Just how NASCAR might deal with flags that pop up will also be closely watched as the nation goes through a reckoning on race relations following the death of George Floyd, an unarmed black man whose heart stopped while he was pinned under the knee of a white police officer in Minneapolis. Longtime symbols of the Confederacy are being taken down or are under review; Bubba Wallace, NASCAR's only fulltime black driver, helped push the series to ban the flag.

“If they broadcast this race to millions of people and here are 44 RVs and they’re all flying flags on the infield, then what’s that make NASCAR look like?” said Richard Morman, who runs Concentric Risk Solutions and is a former deputy chief of Ohio State's department of public safety.

If that happens, he said, “That’s an institutional, reputational issue (where) NASCAR said they’re going to ban this and they haven’t or they’re not enforcing it.”

“But I know being from Talladega and experiencing the races my whole life, there are a lot of people that do fly it,” Ragland said. “But I think I will have to echo the sentiment of Dale Earnhardt Sr. and Dale Earnhardt Jr. when I say it belongs in history books. And NASCAR, I think, has taken the correct step to make sure that all of their fans feel included in the NASCAR community.”

A panel of representatives from some of North America's major sports leagues — including NASCAR, Major League Soccer, the NFL, Major League Baseball and the NBA — is holding weekly conference calls to discuss running events and games amid the pandemic, said Jeff Stonebreaker, vice president of safety and security for MLS.

Topics include “everything from how do you handle cleaning and sanitation to how are you sourcing protective equipment and how are you going to approach different things.

“Clearly with that much variety, there’s no one size fits all," he said. “But it’s a very interesting time to be involved.”

Major League Soccer is resuming its season July 8 with a World Cup-style tournament in Florida without fans.