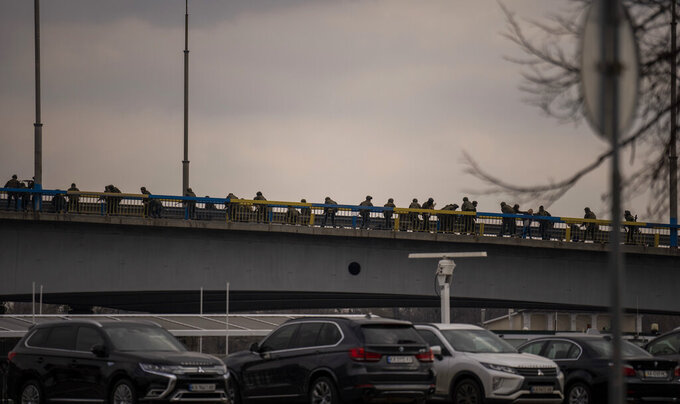 Ukrainian soldiers withdraw from their positions after heavy crossfire inside the city of Kyiv, Ukraine, Friday, Feb. 25, 2022. Russia pressed its invasion of Ukraine to the outskirts of the capital Friday after unleashing airstrikes on cities and military bases and sending in troops and tanks from three sides in an attack that could rewrite the global post-Cold War security order.(AP Photo/Emilio Morenatti)

The Haas Formula One team hasn't yet decided whether Russian driver Nikita Mazepin will race this year.

On Friday, F1 canceled the race in Russia scheduled for Sept. 25, saying it was “impossible” to race there given the situation after Russia’s invasion of Ukraine.

Haas removed its sponsorship from Russian company Uralkali late Thursday and is running plain white cars on the final day of F1 pre-season testing in Barcelona. Haas not only receives significant funding from Uralkali but also fields a car for Mazepin.

Team principal Guenther Steiner said the 22-year-old driver, who did not attend media duties Thursday and Friday, has no guarantees.

“There are no guarantees anywhere. There are governments (involved) and I have no idea what is coming from that side,” Steiner said. “He puts a tough face on it. For sure it bothers him because it’s his own country.”

Mazepin's future and a decision whether to continue with Uralkali as a sponsor will be addressed next week.

Mazepin tweeted Friday: "To my fans and followers — it’s a difficult time and I am not in control over a lot of what is being said and done. I’m choosing to focus on what I CAN control by working hard and doing my best for my @HaasF1Team. My deepest thanks for your understanding and support.”

“It needs to be resolved. Not everything depends on us," Steiner said, adding that “we need to see how the situation develops in Ukraine ... There are legal issues we have to go through and then we see what’s coming out."

Steiner added that Haas' American team owner Gene Haas “stands behind the decision" to remove Uralkali sponsorship on the cars. They are typically red, white and blue with a livery that resembles the Russian flag.

Haas’ German driver Mick Schumacher spoke of his sadness at the events unfolding in Ukraine.

“We all heard the horrible news that war started and I think that’s something that affects us all, something that personally makes me really sad to see,” said Schumacher, the son of seven-time F1 champion Michael Schumacher. “I think we should all hope and pray for Ukraine.”

Russia pressed its invasion of Ukraine to the outskirts of the capital Friday after unleashing airstrikes on cities and military bases and sending in troops and tanks from three sides.