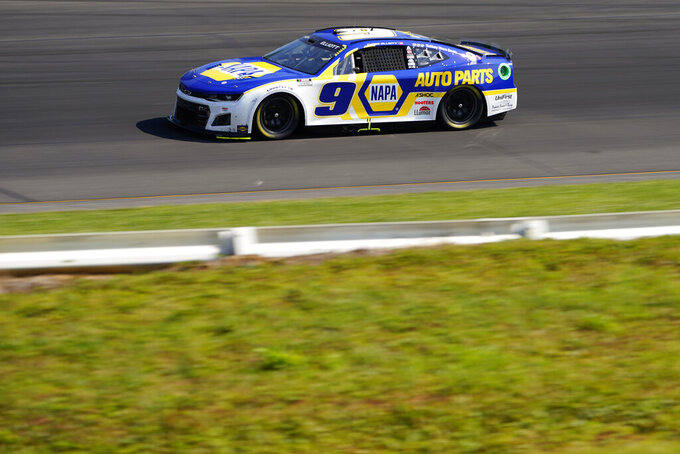 LONG POND, Pa. (AP) — The siren at the Dawsonville, Georgia, pool hall that sounds whenever Chase Elliott wins a race did indeed go off Sunday night without the hometown star ever leading a lap at Pocono Raceway.

In an extraordinary decision for a NASCAR Cup Series race, Joe Gibbs Racing driver Denny Hamlin had his Pocono win thrown out and runner-up and teammate Kyle Busch also was disqualified after their Toyotas failed inspections.

Elliott shot up from third place and the Hendrick Motorsports driver was awarded his fourth victory of the season. He never led a lap in the No. 9 Chevrolet — and his car also was inspected by NASCAR.

Hamlin lost his record seventh victory at Pocono and his third win of the season. Busch led a race-high 63 laps.

NASCAR believed the last time it disqualified an apparent winner was April 17, 1960, when Emanuel Zervakis’ victory at Wilson Speedway in North Carolina was thrown out because of an oversized fuel tank.

“We were shocked to learn of the infraction that caused our two cars to fail NASCAR’s post-race technical inspection," Joe Gibbs said in a statement. "We plan to review every part of the process that led to this situation.”

The penalties can be appealed and both Toyotas were sent to NASCAR's research and development center in North Carolina for further evaluation. NASCAR said the infractions were not caught in the pre-race inspection because the wrap was not removed from the cars until after the race.

“There was some issues discovered that affect aero in the vehicle,” NASCAR Cup Series managing director Brad Moran said. “There really was no reason why there was some material that was somewhere it shouldn't have been. And that does basically come down to a DQ.”

Moran said the parts in question were the front fascia —essentially the nose cone — and final decisions “should be sorted out by next week.”

Moran said the inspection “rules have tightened up” with the introduction this season of a new car. NASCAR’s newest version is pretty much a kit car. Teams get all the same pieces from varying vendors and have detailed instructions regarding how to put it together.

“We don't want to be here talking about this problem,” Moran said. “But the teams and the owners and everybody was well aware that this new car was going to be kept with some pretty tight tolerances. There's some areas that all the teams are well aware that we can not go down the path that we had in the past with the other car.”

The failures marred what had been a banner day for JGR.

Hamlin had seemingly won for the third time this season and passed Hall of Fame driver Jeff Gordon for most wins at Pocono with seven. Hamlin swept two races at Pocono in his rookie season in 2006, and added wins in 2009, 2010, 2019 and 2020. Now, he remains tied with the four-time NASCAR champion.

Hamlin had plenty to handle from the start, when the pole sitter tagged the wall on the opening lap. He recovered — at 400 miles on the 2 1/2-mile tri-oval there’s plenty of racing ahead — then had to watch Busch lead the majority of the race. Oh, then there was this thorny issue of settling a lingering score with Ross Chastain.

Chastain wrecked Hamlin two times in a month earlier this season — Hamlin counted two more times from last season — and was fed-up with the aggressive driving of the watermelon farmer. Hamlin refused to give his rival an inch off a restart at Pocono and forced Chastain into the wall with 16 laps left in the race. Chastain slammed the wall and triggered a wreck that collected several drivers, including winless Kevin Harvick, who is fighting for a playoff spot.

Chastain, who has two wins this season driving for Trackhouse Racing, sheepishly understood comeuppance was due.

“I think that’s something that’s been owed to me for a few months now,” Chastain said.

Hamlin got the last word — well the latest word — but does it squash their beef? Perhaps not, as the wife of Chastain’s race team owner Justin Marks tweeted, “Game. On.”

“We’ve just been good friends and he’s certainly someone that I look up to from a talent standpoint,” Hamlin said. “He was the guy that for 36 races was a threat to win, and that’s what I hope to be some day.”

Hamlin is pretty close: He’s a three-time Daytona 500 champion and part owner of 23XI Racing with Michael Jordan. About the only blemish on his resume is the championship he’s failed to win — and the first DQ of his Cup career.

Hamlin’s young daughter burst into tears of joy and he sent her to retrieve the checkered flag. Taylor Hamlin clutched the flag as she slid through the passenger’s side window and took a victory lap around Pocono with dad at the wheel.

Hamlin tweeted a photo of his daughter holding the flag and he wrote, “Yeah, good luck getting that back.”

NASCAR could say the same to him over his championship trophy.

Busch suffered a head injury during a hard hit Saturday in qualifying and was not cleared to race by NASCAR’s medical staff. That opened the door for the 19-year-old Gibbs. In a pinch, the grandson of Joe Gibbs wore Busch’s firesuit and Hamlin’s shoes.

“I never thought I’d race with these guys,” Gibbs said. “It was just cool being next to them on the track. To 10-year-old Ty, that means a lot.”

“He was discouraged that he couldn’t get more out of it,” Gibbs said. “I think he realizes how tough it is.”

Gibbs remained concerned JGR has yet to reach a new contact with Kyle Busch.

“We had a couple of companies, we thought (were in) that wound up to be disappointments for us,” Gibbs said. “But it is hard and it is discouraging.”