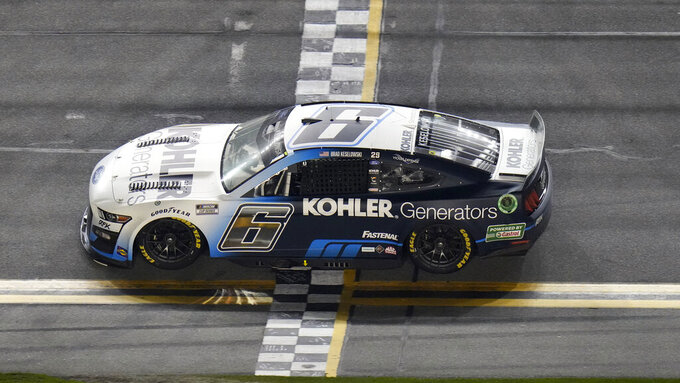 The 40 drivers competing in the 2022 Daytona 500, in order of starting position:

NOTEWORTHY: Bowman is starting the Daytona 500 from the front row for a record-tying fifth straight year. He won a career-high four races last year and had made the playoffs in each of his four full seasons at Hendrick.

NOTEWORTHY: The 2012 Cup champion is making his debut as a driver/co-owner at Roush Fenway Keselowski Racing. He won the first of two Duel races Thursday and dedicated it to his father, who died in December. He’s winless in 12 Daytona 500 starts, although he does have seven victories at NASCAR superspeedways.

NOTEWORTHY: The son of Team Penske President Tim Cindric is racing his first full Cup season for Penske, replacing Keselowski in the No. 2. He’s one of three newcomers vying for rookie of the year honors.

NOTEWORTHY: Won last year’s Daytona 500 as a 100-1 longshot after Team Penske drivers Joey Logano and Brad Keselowski wrecked battling for the lead on the final lap. It was McDowell’s first victory in 358 Cup starts.

NOTEWORTHY: Two-time runner-up in the Daytona 500 is looking for a breakthrough victory in his eighth try. He won a career-best three races in 2021 and finished in the top 10 in points for the fifth straight year.

NOTEWORTHY: One of three newcomers vying for rookie of the year honors. Made one Cup start last year, finishing 20th at Talladega.

NOTEWORTHY: Briscoe begins second season at Stewart-Haas. He finished 23rd in points as a rookie in 2021, with three top 10s.

NOTEWORTHY: Beginning his second season with JGR. Made the playoffs last year thanks to a victory on the Daytona Road Course, but finished 12th in points.

NOTEWORTHY: Jones begins his second season in Petty’s iconic No. 43. He finished a career-worst 24th in 2021, with six top 10s.

NOTEWORTHY: The 2017 Cup champion has finished second in points three times in the last four years, including last season. He is 0 for 17 in the Daytona 500, the longest current skid of anyone in the field.

NOTEWORTHY: He made the playoffs in his second Cup season at RCR and finished 13th, another step forward for a promising driver who was a two-time Xfinity Series champion (2018-19).

NOTEWORTHY: Beginning his second season at 23IX, which expanded to two cars this season and is owned by fellow Toyota driver Denny Hamlin and basketball great Michael Jordan.

NOTEWORTHY: The 2004 Cup champion has at least one victory in eight consecutive years, including the 2017 Daytona 500. He is entering his first season driving for 23XI, which is owned by three-time Daytona 500 winner Hamlin and NBA legend Michael Jordan.

NOTEWORTHY: Stenhouse is one of NASCAR’s most aggressive superspeedway drivers, with both of his wins in 328 Cup starts coming at superspeedways in 2017.

NOTEWORTHY: The eighth-generation watermelon farmer is driving a second car for newly expanded Trackhouse, which is owned by rapper Pitbull and former NASCAR driver Justin Marks.

NOTEWORTHY: The 2015 Daytona 500 winner and 2018 series champion has become a perennial title contender since moving to Penske in 2013, finishing in the top 10 eight times in nine years.

NOTEWORTHY: The 2014 series champion and perennial title contender won NASCAR’s signature event in 2010. He has finished fifth or better in each of the last five years, but has gone 43 races without a Cup victory.

NOTEWORTHY: Byron has one victory in each of the last two years, but has made the playoffs in three straight seasons at Hendrick. He’s entering the final year of his contract, but Hendrick insists he wants Byron in the fold “forever.”

NOTEWORTHY: His father is two-time NASCAR Busch Series champion Randy LaJoie, who won titles in 1996 and ’97.

NOTEWORTHY: Haley has one victory in 36 career Cup starts, with the win coming in the 2019 summer race at Daytona. Haley was out front when the skies opened and rained out the event.

NOTEWORTHY: Dillon, the younger brother of Austin Dillion, is winless in 166 career Cup starts. He is beginning his first season driving for Petty GMS. He previously drove for his grandfather at Richard Childress Racing, Gaunt Brothers, Germain, Leavine Family, Tommy Baldwin and Stewart-Haas.

NOTEWORTHY: Cassill is driving a car with a patriotic paint scheme and sponsored by Fox Nation. The red, white and blue car is likely to delight much of NASCAR’s right-leaning fanbase.

NOTEWORTHY: The 52-year-old Biffle last raced in the Cup Series in the 2016 season. He won 19 times over 14 years at Roush Racing and agreed to join team owner John Cohen for a start-up program designed to promote minority drivers. Cohen eventually hopes to get current Drive for Diversity drivers Rajah Caruth or Lavar Scott behind the wheel.

NOTEWORTHY: Gilliland is making the jump to Cup after 93 races and two victories spanning the last five years in the Truck Series. He won back-to-back (2016-17) titles in the K&N Pro Series West.

NOTEWORTHY: The three-time Daytona 500 winner (2016, ’19, ’20) is trying to join Cale Yarborough and Richard Petty as the only drivers to win “The Great American Race” at least four times.

NOTEWORTHY: Custer finished 26th in his second full season at Stewart-Haas, a disappointing year for a promising driver who made the playoffs as a rookie.

NOTEWORTHY: Ware made a career-high 32 starts last season and even led five laps. He has openly discussed his struggles with depression and anxiety in hopes of helping others.

NOTEWORTHY: Hemric is back in the Cup Series after a two-year stint in the Xfinity Series, where he won the championship last season with Joe Gibbs Racing. He was the Cup Series rookie of the year in 2019 with Richard Childress Racing, but was let go after one season.

NOTEWORTHY: Ragan has two wins in 472 Cup starts, both on superspeedways. He won the Daytona summer race in 2011 and at Talladega two years later.

No. 50 Chevrolet, The Money Team Racing

NOTEWORTHY: Grala is making his debut with upstart TMT Racing, which is owned by former boxing champion Floyd Mayweather Jr. The team leaned on Eury Jr. to get up to speed, relying on him to build the car, assemble a crew and get them all to Daytona on time and ready to go.

NOTEWORTHY: The 2018 Daytona 500 champion missed the playoffs last season after finishing 17th in the regular season, one spot below the cutoff.

NOTEWORTHY: McLeod is an owner-driver racing in his fourth Daytona 500. He is winless in 85 Cup starts but finished a career-best ninth in last year’s summer race at Daytona.

NOTEWORTHY: Almirola has made the playoffs four straight years since replacing Danica Patrick in the No. 10 car. The 15-year veteran plans to retire at the end of this season, but adds he potentially “could get a hall pass” to make another Daytona 500 start.

NOTEWORTHY: Gragson earned a starting spot in the Daytona 500 in single-lap qualifying, a huge victory for a team that missed the opener last year after owner Mark Beard died in January 2021. Gragson is expected to attempt all four superspeedway races for Beard. He also will run about a dozen Cup events for Kaulig Racing and race full time in the Xfinity Series for JR Motorsports.

NOTEWORTHY: The 50-year-old Villeneuve is the 1995 Indianapolis 500 winner and the 1997 Formula One champion. He is filling in for Loris Hezemans, the 24-year-old son of team co-owner Toine Hezemans who is not approved to race at Daytona.