Where next for Vettel and who will replace him at Ferrari? 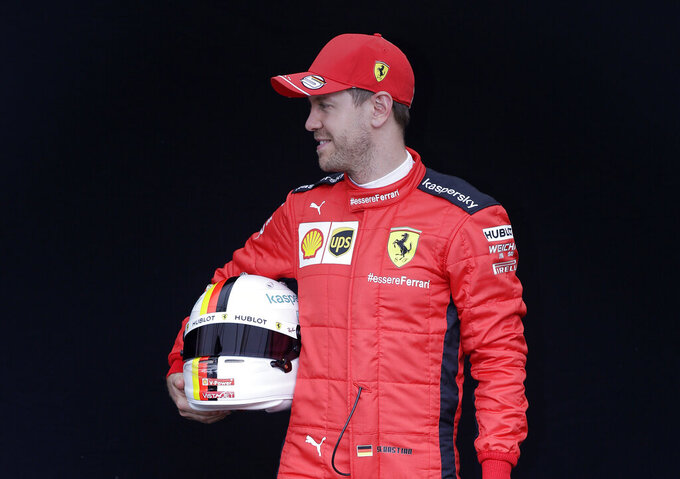 PARIS (AP) — With Sebastian Vettel's stint at Ferrari coming to an end, speculation has already started about where he will go next and who will replace him.

The four-time Formula One champion announced Tuesday that he is leaving the Italian team by mutual consent when his contract expires this year. The 32-year-old German driver joined in 2015 to replace Fernando Alonso, but has not added to his world titles at Red Bull from 2010-13.

He had hoped to emulate Michael Schumacher, his childhood idol, who won five of his record seven F1 titles with Ferrari.

But he only won 14 of his 53 career races during five seasons with Ferrari.

Italian and German media reports have linked Vettel to McLaren, possibly in a straight swap for the 25-year-old Carlos Sainz Jr.

Renault driver Daniel Ricciardo is also being strongly touted as Ferrari's choice, and could be eager for a switch after his team struggled last season. The Australian driver went from winning seven races and getting regular podiums with Red Bull to only managing one fourth-place finish with Renault, coming ninth overall in the standings.

McLaren is on the rise again, so it could be a logical move for Vettel. The door appears largely closed to Vettel at Mercedes, where Lewis Hamilton has a strong relationship with teammate Valtteri Bottas, and shut firm at Red Bull.

Max Verstappen is Red Bull's undisputed No. 1 driver, which ultimately led to Ricciardo seeking breathing room elsewhere. Vettel and Verstappen also don't have the best relationship, as they have clashed on track in the past and aimed jibes at each other.

The other option for Vettel is simply to retire altogether after starting his F1 career in 2007, and winning his first race the following year.

Here's a look at the two drivers touted as his possible replacement.

The Spaniard knows all about winning world titles, but only from listening to tales from his father Carlos Sainz — the former rally world champion.

What the junior Sainz offers Ferrari is a calm temperament and consistency.

He drove well last season, securing his first podium and contributing strongly to McLaren's fourth place in the constructors' championship.

His demeanor could work in his favor, since the discreet Sainz Jr. is unlikely to clash with rising star Charles Leclerc — Ferrari's No. 1 for several years to come.

Sainz said in February that he's “very happy" at McLaren and that "I cannot start thinking about anything else.”

Vettel's decision, though, may have changed that.

Excellent at overtaking and among the quickest drivers, Ricciardo has shown glimpses of championship-winning potential.

But not very regularly.

He shot to prominence at Red Bull in 2014 when he won three races in his first season after joining from Toro Rosso, while Vettel didn't win any.

But Ricciardo has struggled to contend with the forceful Verstappen, whose brazen and muscular approach to driving is matched by his steely and imposing mentality.

As Verstappen's status grew at Ricciardo's expense, he felt the need to make a surprising — and so far unsuccessful — move to Renault.

At 30 years old, Ricciardo should be at his peak but must end a run of mediocre performances.

He is without a podium since winning the Monaco GP from pole position in 2018 — the finest moment of his career.

He's also out of contract for next year, and gets on well with Leclerc.

COULD VETTEL AND HAMILTON SWAP SEATS?

Hamilton is out of contract at the end of this year. But even though he did not dismiss a move to Ferrari a few months ago, the six-time world champion's huge salary looks too steep for the Italian team.

But if he's willing to take a pay cut, Hamilton could theoretically go to Ferrari with Vettel joining the German manufacturer.

A return to Ferrari looks almost impossible for Alonso, considering he left team amid a very painful fallout.

But the Spanish driver is still among the best — and certainly most experienced — drivers in F1, and rated highly by Hamilton for his outstanding race craft.

Age is against Alonso, who turns 39 halfway through next season. But he could potentially be given a one-year deal and see how he fares against Leclerc.