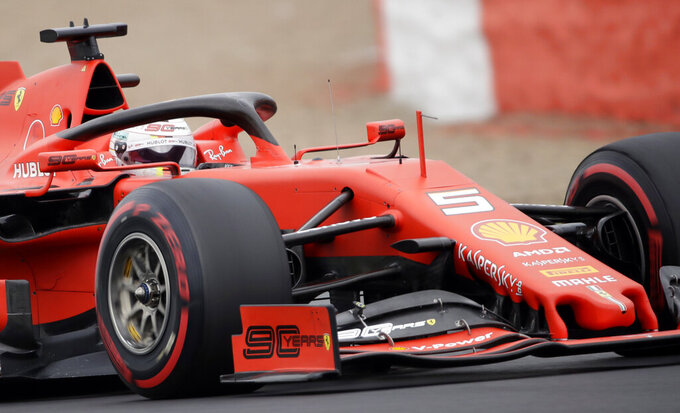 FILE - In this file photo dated Saturday, July 13, 2019, Ferrari driver Sebastian Vettel of Germany steers his car during the third free practice at the Silverstone racetrack, in Silverstone, England. Given Vettel's recent lack of form the last place he might want to race upcoming weekend is his home Grand Prix in Hockenheim, Germany. (AP Photo/Luca Bruno, FILE)

HOCKENHEIM, Germany (AP) — Given Sebastian Vettel's lack of form, the last place he might want to race this weekend is his home grand prix in Germany.

Hockenheim serves as a painful reminder to Vettel because his title bid started to unravel at the track last year.

He was leading Lewis Hamilton in the Formula One championship, and comfortably leading the race heading into the closing stages. Then, he crashed into the barriers and gifted Hamilton a win . Although the rain was falling hard it was a mistake unbefitting of a four-time world champion, especially considering he was under no pressure from Hamilton at the time.

"I won't forget that race, that moment," Vettel said. "That was a mistake and it was costly. Very costly."

It proved to be a turning point.

Hamilton took command in the title race, just like in September 2017 when Vettel's title bid crumbled following a crash from pole position in Singapore .

The errors have been piling up for Vettel, while the wins have not, and his composure remains a talking point in F1. That's all despite Vettel having 230 races and 115 podiums, including 52 wins in a career spanning 12 years.

At the British GP two weeks ago, he misjudged an overtaking move and slammed into the back of Max Verstappen's Red Bull .

Vettel apologized in person to the irate Verstappen, a winner in Austria the previous race, but it was yet another baffling error from Vettel.

Unfortunately for Ferrari, which last won the drivers' championship with Kimi Raikkonen in 2007, these mistakes are becoming commonplace.

Vettel was in contention to win the Canadian GP last month, too, but seemed to panic when Hamilton's Mercedes appeared behind him and he swerved off and back onto the track. Vettel was handed a time penalty for unfairly impeding Hamilton , costing him the win.

Vettel's last victory was at the Belgian GP last August, a barren run of 18 races.

"I always put myself under pressure so I can't be happy with things going wrong. The pressure I put on myself is bigger than any external factors," Vettel said Thursday. "For me it's the most straightforward way to deal with (things) myself. Because I know what I've done wrong, what I've done right. You are always your best judge."

The pressure on Vettel to start delivering for Ferrari is mounting. He has one year left on his contract after this season, and questions are being asked as to whether he should be the team's No. 2 driver behind Charles Leclerc.

The 21-year-old Leclerc is only in his second year in F1, having replaced Raikkonen at Ferrari after impressing with Sauber.

Leclerc has not won a race, although he came close in Bahrain and in Austria, but has shown greater speed and composure than Vettel in recent weeks.

Vettel, although the vastly more senior driver, leads Leclerc by only three points — with Vettel fourth and Leclerc fifth in the standings.

Leclerc is aiming for a fifth straight podium finish and a third pole position of the season.

By comparison, Vettel has no podiums in the past three races and four in 10 so far, with one pole position.

Vettel's ongoing woes, and the ongoing debates at Ferrari, are great news for Mercedes. Hamilton's main rival is not Vettel or Leclerc, but Mercedes teammate Valtteri Bottas.

Although Bottas started the season strongly, Hamilton leads him by 39 points approaching the halfway point of the season. Bottas, who is second overall, has not won since Azerbaijan in April.

Hamilton's quest for a sixth world title, which would move him one behind German great Michael Schuamcher's F1 record, is gathering momentum.

The 34-year-old British driver has won five of the past six races, and counts 80 overall as he chases Schumacher's all-time record of 91.

Ferrari seems powerless to stop him.

"We are trying a lot of things to make it better. The motivation is high to get the job done with Ferrari," Vettel said. "Mercedes does have an edge over everybody else. In terms of raw speed, they're the benchmark ... I want to win but also I'm realistic, coming here I don't feel we're the favorites."