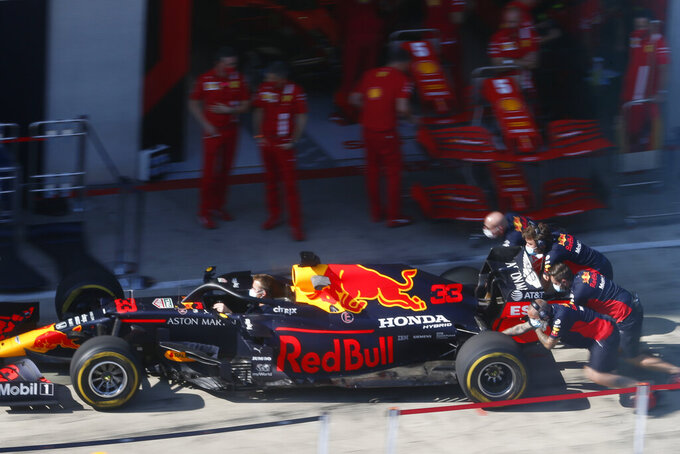 SPIELBERG, Austria (AP) — Sebastian Vettel would be open for a return to Red Bull next season — if his former team wants him back.

The four-time Formula One champion is leaving Ferrari at the end of the year with his future uncertain. He has said he may even retire if he doesn't get a suitable contract offer.

Red Bull could change all that with a phone call.

“I think it’s a winning car," Vettel said Thursday. "I’m here to compete and I’m here to win, so probably the answer would be yes,”

Vettel won all his F1 titles with Red Bull during a highly dominant spell from 2010-13. He is still in contact with a lot of people there and thinks the team has the potential to get back to the top of F1.

But Red Bull has not confirmed its drivers’ lineup for next season, with Alexander Albon fighting to keep his place alongside the team’s No. 1 Max Verstappen.

“I know why they were strong back then and they are still, I think, a contender and obviously it's a car that you can win races in," Vettel said. "So for sure that would be interesting.”

Competing against Verstappen, considered the future star of F1, would not pose a problem for Vettel — even though they have clashed on the track in the past.

“I'm generally of the conviction that if you want to win you have to be happy to take on anyone,” Vettel said. “I’ll take the time that I need to take a decision for myself first. Everything is an option at the moment: carry on, have a break, or retire. It depends on what sort of options are around."

Racing Point, which will become Aston Martin next season, may also shape up as on option if the team keeps improving. Sergio Perez finished sixth driving for Racing Point — which is powered by a Mercedes engine — at last Sunday's season-opening Austrian GP.

“Racing Point left a very strong impression and they’re certainly in a good place for this year," Vettel said. "I know some members of the team quite well from my part, and for a long time.”

Vettel had discussions with Renault about their vacant seat for 2021 but "at no point concrete enough or fundamental talks," he said.

Renault instead re-hired Fernando Alonso, who won his two world titles with the French manufacturer in 2005 and '06.

“They’ve gone a different direction so it doesn’t change much for me,” Vettel said. "It really depends on my decision, which I’m not (feeling) pressure to take in the next couple of days.”