Vettel and Leclerc under pressure to give Ferrari needed win 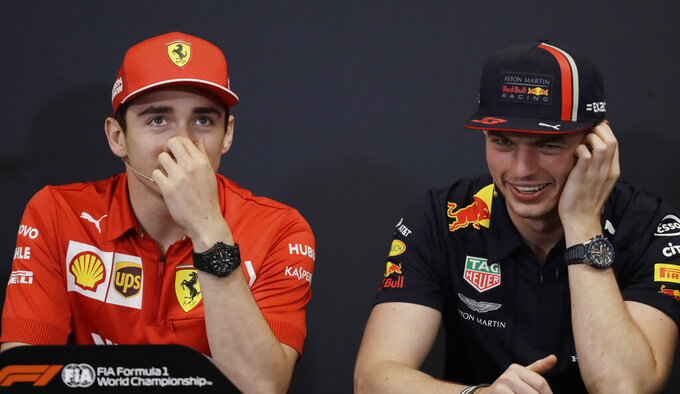 Ferrari driver Charles Leclerc of Monaco, left, is flanked by Red Bull driver Max Verstappen of the Netherland's as they attend a news conference at the Monaco racetrack, in Monaco, Wednesday, May 22, 2019. The Formula one race will be held on Sunday. (AP Photo/Luca Bruno) 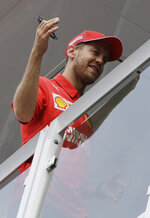 MONACO (AP) — For Ferrari, the Monaco Grand Prix could be the last chance to get back into the Formula One title race.

After five races and no wins for either Sebastian Vettel or Charles Leclerc, Ferrari's hopes of ending the dominance of Mercedes are already hanging by a thread.

Vettel, the four-time F1 champion, was in championship contention for the past two seasons only to fall away during the second half of them as British driver Lewis Hamilton went on to win both titles for Mercedes.

This time he is already nearly 50 points behind championship leader Hamilton, who is chasing a sixth F1 title and facing far sterner competition from teammate Valtteri Bottas than he is from Ferrari.

Mercedes has swept the past five drivers' and constructors' titles and looks likely to repeat that after placing 1-2 in the first five races . Bottas sits only seven points behind Hamilton and the Finnish driver has taken the past three pole positions to underline his improving credentials.

Vettel is fourth overall in the standings, behind Red Bull's Max Verstappen, while Leclerc is fifth. Few would have predicted such a poor start, especially after encouraging signs in pre-season testing.

"Others have done a better job than us," Vettel said Wednesday at the Ferrari motorhome. "There have been some negative signs, for sure."

Still, the German driver insists Ferrari can begin to stop the rot with a morale-boosting win in Monaco.

"We deserve a good result, for everybody's sake," Vettel said. "We've been working hard, it's not like we've been leaning back and taking the sun the last couple of weeks."

Although the Mercedes drivers are free to compete against each other, without the sometimes irritating imposition of team orders, there appears to be none of the animosity that spilled over into open conflict when Hamilton and Nico Rosberg competed for Mercedes from 2014-16. Rosberg won the 2016 title under intense pressure from Hamilton, but they fell out before that.

Things are far smoother at Mercedes now, with Hamilton and Bottas often speaking about — and showing — mutual respect.

But over in the Ferrari garage, tensions have already crept in between the two drivers, as the 21-year-old Leclerc has twice been curtailed by team instructions favoring Vettel despite being the faster driver on race day.

With 52 wins to his name, the 31-year Vettel remains the No. 1 driver. But more so because he has seniority on his side — rather than greater speed.

The only race where Ferrari has had the upper hand was Bahrain, the second of the season, where Leclerc took a stunning pole position and looked certain to win the race until his engine betrayed him and inexplicably lost power late on.

Ferrari essentially gifted Hamilton a win , because Vettel span his car under pressure from a Hamilton attack shortly before.

The mishaps and malfunctions in Bahrain struck a worrying comparison with the past two years , and set the tone for the season so far.

Instead of looking strong, Ferrari was put immediately on the back foot and the pressure is firmly on team boss Mattia Binotto to turn things around with Ferrari nearly 100 points behind Mercedes in the constructors' championship. Ferrari last won it in 2008, an eternity for its devoted fans.

Because Monaco's sinewy 3.3-kilometer (2-mile) street circuit is one of the most difficult in F1 for overtaking, getting pole on Saturday could prove crucial to stopping Mercedes. Otherwise, as is often the case, the 78-lap race could turn into a procession for the race leader.

As a Monegasque, Leclerc has extra motivation to get another pole.

He watched his first F1 race when he was a small boy in an apartment overlooking the track.

"I was at a friend's apartment, out of turn one, playing with (toy) cars and watching the Grand Prix at the same time," Leclerc fondly recalled. "I think Michael (Schumacher) was at Ferrari. (I was) obviously watching the red cars more than the others."