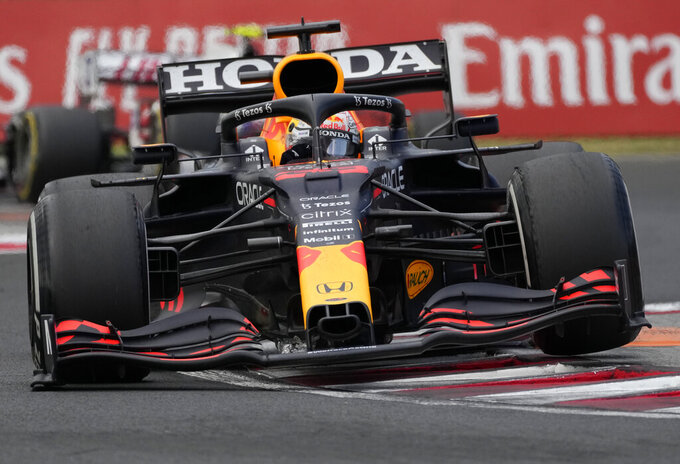 Red Bull driver Max Verstappen of the Netherlands steers his car during the Hungarian Formula One Grand Prix at the Hungaroring racetrack in Mogyorod, Hungary, Sunday, Aug. 1, 2021. (AP Photo/Darko Bandic)

BUDAPEST, Hungary (AP) — Red Bull driver Max Verstappen was quick to express his frustration after being taken out on the first lap of a Formula One race for the second straight time and losing the championship lead.

“Again, taken out by a Mercedes,” Verstappen said after Sunday’s Hungarian Grand Prix. “I was missing the whole side of my car. And the floor was damaged as well, so almost impossible to drive.”

He was actually nudged off track by McLaren's Lando Norris when in second place and he finished 10th. It meant that he conceded significant points and the overall lead to Mercedes driver Lewis Hamilton heading into the midseason break.

But Norris was not at fault, since he had been hit from behind by Hamilton's teammate Valtteri Bottas and lurched into Verstappen — who was knocked off track at the British GP two weeks ago by Hamilton and scored no points in that race.

From being 33 points ahead of Hamilton and on pole position at Silverstone, Verstappen now trails him by six points — 192-186 — after Hamilton finished third in a chaotic Hungarian GP.

“I still tried my very best and I still got one point. It’s at least something but it’s not what you want," Verstappen said, before adding on Twitter. “Disappointing to have two races in a row (with) so much bad luck."

Norris also appeared to blame Bottas, who lost position quickly despite starting from second behind Hamilton.

“All of us are in Formula 1 for a reason, because we’re good drivers and we know where to brake, where to judge braking zones and so on. Especially when it’s wet, especially on the first lap,” Norris said. “But obviously some misjudged it completely. That’s the annoying thing, you expect a little bit more when you’re racing those top guys at the front of the field."

Norris is third in the standings and five points ahead of Bottas in fourth.

The season resumes at the Belgian GP in Spa on August 29th.

“I know that when we go again after the break, I will be there again and I will try my very best,” said Verstappen, who leads Hamilton this season 5-4 in wins, 5-3 for pole positions and 4-3 for fastest laps.

But Hamilton now has the momentum as he bids for a record eighth F1 title.