Valtteri Bottas set to learn his Mercedes future next month 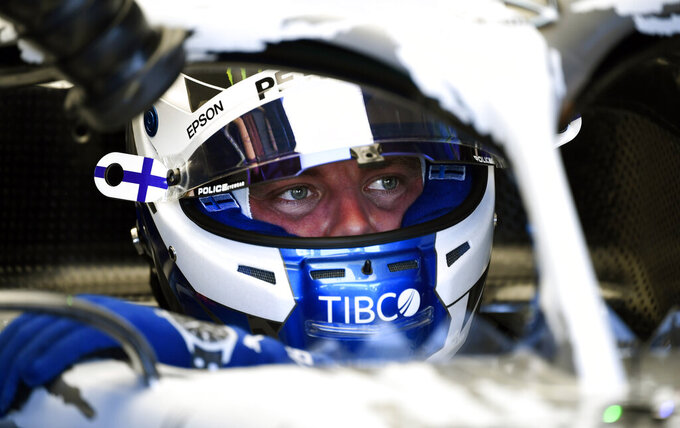 Mercedes driver Valtteri Bottas of Finland prepares for the first practice session at the Hockenheimring racetrack in Hockenheim, Germany, Friday, July 26, 2019. The German Formula One Grand Prix will be held on Sunday. (AP Photo/Jens Meyer)

HOCKENHEIM, Germany (AP) — Mercedes will decide next month whether to give Valtteri Bottas a new contract for 2020, with Esteban Ocon competing for the coveted seat alongside five-time world champion Lewis Hamilton.

Bottas' contract expires at the end of this year, while Ocon is hoping to return to Formula One after missing this season.

Red Bull's 21-year-old Max Verstappen — who has six career wins and is considered F1's future star — is reportedly also in the running to join Mercedes. But Red Bull is committed to keeping him and a move to Mercedes appears problematic to push through.

While Mercedes head of motorsport Toto Wolff is pleased with Bottas, he also needs to look at the long-term future of the team.

"For us it is not only about making the right decision for next year but looking ahead," Wolff said Friday at the German GP. "This is why we agreed that we will take the decision in August, but it doesn't necessarily mean we will announce it in August."

Wolff urged the Finnish driver to "put in two solid performances in Hockenheim and Budapest" in Hungary, the last season before the mid-season break.

The 29-year-old Bottas won three races in 2017 during his first season with Mercedes after replacing Nico Rosberg following the 2016 world champion's surprise retirement. Bottas cemented a deal for 2018, but he failed to win a race last year.

Bottas vowed to prove his doubters wrong, defiantly saying in March, "I'm going to beat everyone this year." He started with two wins in the first four races, even leading the championship ahead of Hamilton, but has not won since Azerbaijan in April. He is in second place in the standings, 39 points behind Hamilton.

Ocon is considered one of the most promising young drivers, but the 22-year-old Frenchman sat this season out in frustrating circumstances.

He raced for Force India last year, but after the team was taken out of administration following a takeover by Canadian billionaire Lawrence Stroll, he was replaced by Stroll's son Lance Stroll.

Ocon did not get a seat elsewhere for 2019 and has thus been working as a reserve driver for Mercedes, having been part of the team's setup since coming through its prestigious junior program.

"As we all know it was an unfortunate situation last year. ... Everyone knows about his driving capabilities," Wolff said. "Valtteri is showing some very strong performances and merits the seat, but equally Esteban has shown that in the past and is a great addition to the team."

If Wolff keeps Bottas, he effectively risks losing Ocon to another team, because Ocon is unlikely to accept being a reserve again in 2020.

"There is interest for Esteban among other teams and we need to carefully make a decision for ourselves and with the other interested parties. Not only for our own benefit but also for Esteban's benefit," Wolff said. "If it would be that we (make) a decision in favor of Valtteri, it clearly also means that somebody else continue(s) to develop (Ocon). ... These are the consequences."