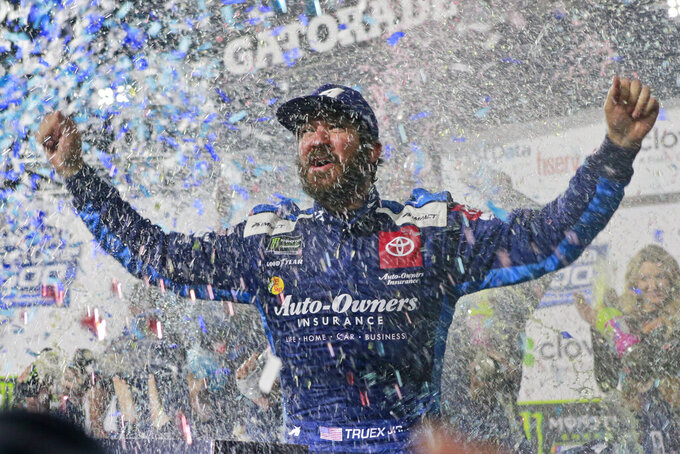 CHARLOTTE, N.C. (AP) — Martin Truex Jr. struggled on short tracks for 15 years before he finally snapped his streak of futility and swept this season at Richmond. He'd been inching his way closer to victory lane, only to come up empty in frustrating finish after frustrating finish.

Martinsville Speedway wasn't any kinder to Truex, who recalled "the first couple times I came here, we were terrible. I mean, awful."

The trip to the shortest track on the NASCAR circuit last weekend was different. It was a vital playoff race. Truex was intent on collecting his first grandfather clock (Martinsville awards a clock instead of a traditional trophy, and he had gone so far as to choose a spot in his home for the prestigious item.

"In my living room, you'll be able to see it as soon as you walk in the front door," he said. "I've actually looked at that spot before and thought, 'That grandfather clock would look good right there.'"

Truex earned his first clock Sunday by demolishing the competition in leading all but 36 of the 500 laps. The long-awaited victory also locked him into NASCAR's final four with the chance to race for the Cup Series championship Nov. 17 for the third consecutive year. His move to Joe Gibbs Racing after Furniture Row Racing closed at the end of last season has been almost flawless.

Truex goes to Texas Motor Speedway this weekend as the only driver locked into the finale and leads the Cup series with seven victories.

Crew chief Cole Pearn can literally do nothing the next two weeks but work on the No. 19 Toyota that Truex will race in the final at Homestead-Miami Speedway — a luxury the other seven title contenders don't have as they claw their way toward the remaining three slots. But sitting back isn't part of the plan.

Although Truex raced with Furniture Row for the title in four of the last five seasons — he won in 2017 and was runner-up to Joey Logano last year — he'd never before won in the third round of the playoffs to earn an automatic berth in the title race. Now that he's locked in, he and Pearn want more.

"We've never been in this position before — every time we've made the final four we've pointed our way in," Truex said, referring the points standings. "We've never won in this round, so it's new territory. It's good territory to be in, but, honestly, we can't change who we are. You race every week the same, just there's more on the line as you go down the road here. ... we're going to go try to win the next two. Just like here, we've never won the next two tracks, and we want to, so here we go."

Up first is Texas on Sunday, where Truex is 0 for 28. JGR teammate Denny Hamlin won at Texas in the spring, while Kevin Harvick dominated last fall before his victory was disqualified because of an illegal part on his car. The tension in spots two through eight is thick, with Hamlin, Kyle Busch and Logano above the cutline for the final three positions at Homestead.

Harvick's playoffs have been mediocre and he is coming off two consecutive poor weeks of racing, Busch has looked nothing like he did while winning the regular-season title and Chase Elliott's mechanical problems at Martinsville have put NASCAR's most popular driver in a must-win situation over the next two weeks.

Ryan Blaney and Kyle Larson, both racing on borrowed time after surprise victories in the second round of the playoffs, are longshots but many believe if Larson qualifies for Homestead he could steal the title because the Florida track is one of his best.

All of this leaves Truex, the only one with an actual ticket to the title race, somewhat under the radar.

His long journeyman career took him from B-level ride to B-level ride until he landed outside of Denver with mid-pack Furniture Row. But he and Pearn became a magical combination and turned the tiny team first into a contender and then into a champion.

Furniture Row folded after last season's finale and Truex and Pearn went in-house to Gibbs, the team aligned with Furniture Row. The transition has been so seamless it hardly gets any attention at all, which has allowed the No. 19 team to build a quiet confidence and determination to grab another championship.

Pearn said the Martinsville win does free more time to prepare for Homestead, but the next two races also have trophies available.

"If you have an opportunity to win, you want to go do it and do it for everybody on our team and our partners, so yeah, we're still going to try hard the next two weeks," he said.