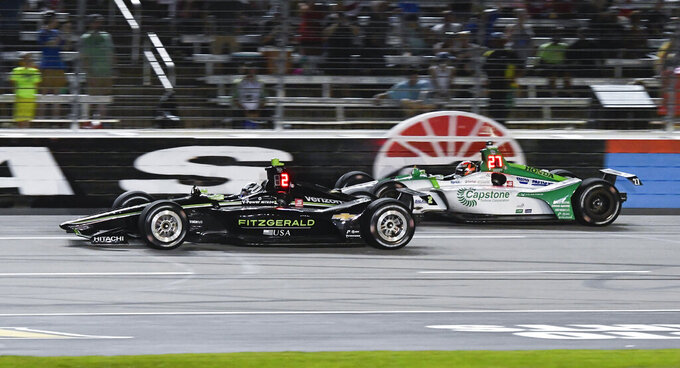 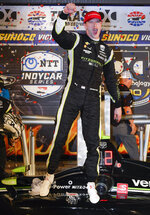 FORT WORTH, Texas (AP) — Alexander Rossi will start the second half of the IndyCar season chasing points leader Josef Newgarden, possibly much the same way he did in falling short in the final laps of Newgarden's first victory in Texas .

The Andretti Autosport driver has plenty of time to try to finish what he couldn't in the Lone Star State, starting in two weeks at Road America after the first break for the series since before Newgarden's Penske teammate, Simon Pagenaud, won the Indianapolis 500.

The top three in points are Newgarden, Rossi and Pagenaud, which puts all three in good position for a run at the series championship at the halfway point. There were eight races before Saturday's run at the 1½-mile high speed oval in Texas , and there are eight more after.

As for Rossi, it might come down to escaping the runner-up rut — three times in the past four races, including to Pagenaud at Indy. Currently 25 points behind Newgarden, Rossi also finished No. 2 last year behind series champion Scott Dixon.

"When you have a Penske Chevrolet driven by someone as good as Josef, there's only so much you can do, right?" said Rossi, who dominated in winning at Long Beach and has seven top-five finishes. "I mean, we're always there, but we're always playing the bridesmaid as of late."

Newgarden, the 2017 series champion and now a 13-time IndyCar winner, could be tough to topple as the only three-time winner this season. He has four other top-four finishes and is headed to the Elkhart Lake track, where he has a win and another podium finish in three starts.

"It's never guaranteed where you're going to be good for the second half of the season," Newgarden said. "I think you just got to be open-minded that there might be some tracks we weren't good at in the past, maybe we're good at this year, just capitalize when you can."

Rahal highlighted an interesting night for Rahal Letterman Lanigan Racing after teammate Takuma Sato led the first 60 laps from the pole before sliding through his stall on a disastrous pit stop that dropped him four laps off the lead. Sato, the winner at Birmingham, ended up 15th.

Sato held on to the fifth spot in the standings, and Rahal jumped a spot to eighth.

"We're definitely a player every weekend," said Rahal, who finished eighth in points last year and hasn't finished higher than fourth in his 11 seasons. "While everything hasn't gone totally smoothly, I'm definitely happy with the progression of the team. Takuma Sato has done a great job."

Rahal took issue with Newgarden on the final restart with 12 laps to go, saying he bumped Pagenaud because the leader was brake-checking after the race went green. Rahal said it was something race stewards should review going forward.

"We've had issues with this before," Rahal said. "It was clear. Accelerate, brake, accelerate, brake. It's ridiculous. It's dangerous on these things."

"It leader's discretion to go when he wants," Newgarden said. "I thought I was in a fine enough position to start where I did. I don't know what to tell him. I went when I needed to go."

And Newgarden held off a hard-charging Rossi down the stretch. Now he'll be trying to do the same in the points race.