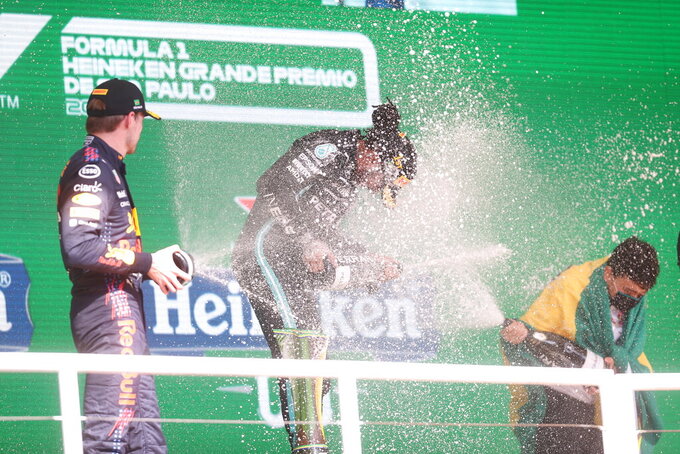 PARIS (AP) — Mercedes has asked for a review of the overtaking incident involving world champion Lewis Hamilton and title rival Max Verstappen during the Brazilian Grand Prix, the Formula One team said Tuesday.

Verstappen was leading the race on Lap 48 when the Red Bull driver defended an attack from Hamilton on Turn 4 and appeared to push the Mercedes star wide off track.

Both were able to continue and Hamilton overtook Verstappen for good on Lap 59 at Interlagos to win and slash the Dutchman’s overall lead to 14 points, despite starting last Sunday’s race from 10th place on the grid.

Race stewards noted the incident at the time but quickly concluded no further action was necessary as they considered it a racing incident.

“I think it was a good battle," Verstappen said after the race. "I mean we both of course tried to be ahead into the corner so I braked a bit late to get that position. I was on the edge of grip. That’s why I think I was already on the apex and it’s a safer way of running a bit wide there. In a way, I was happy stewards decided we could keep on racing.”

Hamilton appeared to shrug it off in his post-race press conference.

“I didn’t think too much of it and obviously I’ll have to watch the replay, but it’s hard battling and wouldn’t expect anything less really,” the British driver said. “We didn’t touch wheels, which is good.”

But now Mercedes said it is appealing "on the basis of new evidence unavailable to the stewards at the time of their decision.”

The stewards must now meet with representatives from the team to assess the new evidence. Governing body FIA need to confirm if they accept the review.

There are three races left in a thrilling championship battle heading into Sunday's inaugural Qatar GP. If the review concludes there was wrongdoing on Verstappen's part, he could potentially be hit with a grid penalty for that race or a five-second time penalty. Verstappen finished the race in second place ahead of Hamilton’s teammate Valtteri Bottas. A five-second time penalty would drop him to third and reduce his overall lead from 14 points to 11.

The 36-year-old Hamilton is bidding for an eighth world title to move one ahead of Michael Schumacher and stand alone among F1 greats, while the 24-year-old Verstappen seeks his first.

Verstappen leads Hamilton 9-6 for wins after 19 races this season, and they have been involved in two heated incidents.

Hamilton was penalized for knocking Verstappen out of the British GP in July with an aggressive overtake and went on to win, while the drivers collided heavily and both went out of the Italian GP in September.

After Qatar, the season concludes with the inaugural Saudi Arabian GP in the Red Sea port city of Jeddah and the final race under floodlights in Abu Dhabi.