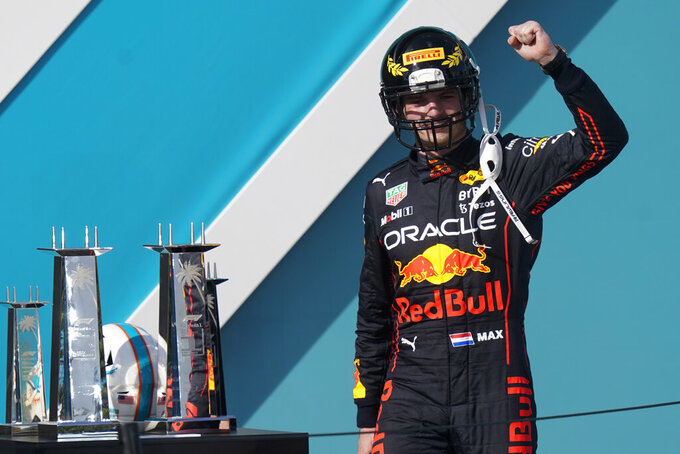 BARCELONA, Spain (AP) — Charles Leclerc has the lead. Max Verstappen has the momentum.

The defending Formula One champion has chipped away at Leclerc’s advantage by stringing together consecutive victories, reducing the difference to 19 points ahead of Sunday’s Spanish Grand Prix.

The sixth event of the season promises to be yet another episode of the Red Bull vs. Ferrari rivalry that has completely eclipsed Lewis Hamilton’s struggling Mercedes.

“We are hunted for now. I quite like this position to be honest, because it means that you are doing something right," Leclerc said. “But it is also true that it’s two races that the gap is slowly closing down. ... I just want to be the most competitive out there. And at the moment, it seems that Red Bull has the upper hand in the races.”

Ferrari team principal Mattia Binotto has hinted that his engineers will use the two weeks between races to introduce important upgrades.

Leclerc started the season with a victory in Bahrain, leading a 1-2 finish with Ferrari teammate Carlos Sainz. After Verstappen leveled it with a win in Saudi Arabia, Leclerc breezed to a dominant performance in Australia and Ferrari had reason to finally believe it had returned to the top.

But back-to-back victories by Verstappen — with Red Bull humbling Ferrari in front of its home fans in Italy before adding a win in Miami — have more than halved the 46-point lead Leclerc had going into the Italian GP.

Verstappen trails Leclerc despite leading him in victories — with three to Leclerc’s two — because he failed to finish both in Bahrain and Australia because of car trouble. Leclerc, meanwhile, has finished runner-up two times, with his worst result being a sixth-place finish in Italy.

When Verstappen's car has not failed him, he has managed to get the better of Leclerc, a rival of his since the days they drove go-karts as youngsters.

“I like the position I’m in at the moment, knowing that the car is quick,” Verstappen said.

The Barcelona race marked a milestone in Verstappen’s rise to glory. In 2016, with Verstappen still a teen, he won his very first grand prix to become F1’s youngest ever race winner.

Since then, it has been a race that Hamilton has devoured.

Hamilton, the man who ruled F1 for years before Verstappen snatched away his crown in dramatic fashion last year, has won the Spanish GP six times, including each of the last five years.

But given Mercedes’ embarrassing inability to even keep pace with Ferrari and Red Bull, Hamilton’s likely goal this weekend is just getting ahead of his upstart teammate. George Russell, 13 years Hamilton’s junior, has so far outperformed the seven-time champion with 59 points to Hamilton’s 36.

The 4.6-kilometer (2.8-mile) Circuit de Barcelona-Catalunya track is well known to the drivers thanks to both the race and the winter preseason testing normally held at the venue. In February's tests, Ferrari had the fastest cars on the circuit.

The local fans will be hoping for good showings from both Sainz, who is fifth in the standings ahead of Hamilton, and Fernando Alonso. The two-time former champion has struggled so far and only notched two points in his Alpine.

Ferrari is searching for its first win at the Spanish GP since Alonso won it in 2013.

The weather forecast calls for sunny, hot and dry conditions all weekend.