Leclerc emerging as Ferrari No. 1 driver as Vettel struggles 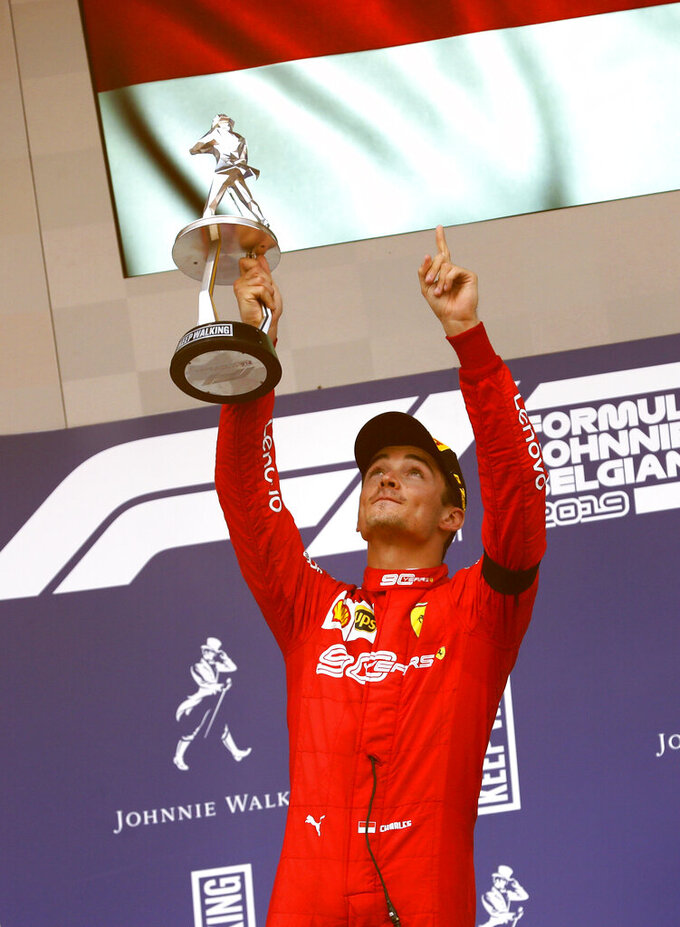 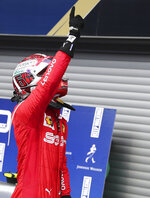 The 21-year-old Leclerc clinched the first Formula One win of what is widely expected to be a stellar career at the Belgian Grand Prix on Sunday. Vettel finished fourth despite starting second on the grid behind Leclerc.

Vettel is now 21 races without a win. Leclerc has one in just his 13th race for Ferrari and only his second season in F1.

He leads Vettel 3-1 in pole positions, and 6-0 in qualifying over the past six races. He showed great poise and nerve to hold off championship leader and five-time F1 champion Lewis Hamilton late in Sunday's race.

"His results speak for themselves," Hamilton said. "It's not easy for any driver to jump into a top team like Ferrari against a four-time world champion, with much more experience, and then to continuously out-perform, out-qualify and out-drive (him)."

Vettel's last win came at last season's Belgian GP. He is fourth in the championship and a massive 99 points behind Hamilton, having led and lost the past two championships to the British driver.

Although Leclerc is fifth overall, he would have won in Bahrain earlier this season if not for a late engine failure out of his control.

He is confident he can be a title contender next season on ability alone.

"If I feel like I'm ready to be challenging for a world title, in the end I have the car and the team for it. We obviously need to work because we are struggling a bit compared to Mercedes," he said. "But on my side, yes I have got a lot learn but I feel ready. Otherwise I shouldn't be in the seat I am in today."

On Sunday, he just held off Hamilton by just .981 seconds.

"I was trying to keep up with him but he was very strong. Ultimately he did a superb job," Hamilton said. "I look forward to seeing his growth and racing (against) him."

Leclerc dedicated his win to French driver Anthoine Hubert, who died Saturday following a heavy crash during an F2 race held on the same track. Drivers paid their respects on Sunday.

Leclerk looked back to his karting days with Hubert in France.

"There was him, Esteban (Ocon), Pierre (Gasly) and myself," Leclerc said. "We were four kids dreaming of Formula One, we've grown up together in karting for many years."

Moments after winning, Leclerc pointed to the sky and then to Hubert's name written on the side of his car.

"To lose him yesterday was a big shock for me," Leclerc said. "It was a very sad day and difficult to enjoy it fully today."

A ninth win of the season and 82nd overall eluded Hamilton. But he extended his championship lead over Valtteri Bottas to 65 points because his Mercedes teammate was third, finishing ahead of Vettel.

At the start, Leclerc got away cleanly but Max Verstappen, winner of two of the past four races, went out on Lap 1. Tens of thousands of orange-clad Dutch fans watched in disappointment as Verstappen's Red Bull slid into the barriers after contact with Raikkonen's Alfa Romeo.

Verstappen finished in the top five of all other races this season and it was his first retirement since the Hungarian GP in July last year. He kept hold of third position in the standings but is a distant 87 points behind Hamilton.

Renault driver Carlos Sainz Jr. also had to abandon following an early collision. The incidents caused the safety car to come out for four laps, and when the race re-started Vettel maintained his lead but Hamilton closed on Vettel.

"Vettel is struggling," Hamilton said on team radio on Lap 10.

Leclerc came in for his tire change exactly midway through the 44-lap race, putting Hamilton in front. But Mercedes called Hamilton in on the very next lap and made a slow stop of 3.6 seconds — which may ultimately have cost him the win.

When Bottas came in one lap later, Ferrari regained the race lead with Vettel ahead of Leclerc until Vettel obeyed team orders to let Leclerc go past on Lap 27.

Hamilton passed Vettel on Lap 32 to take second place but was still seven seconds behind Leclerc. He ate into that lead so much, though, that Leclerc had only a 2-second lead with two laps remaining.

"I gave it absolutely everything," Hamilton said. "I got as close as I could but maybe I needed another couple of laps."

"He had that win coming," Hamilton said of Leclerc.