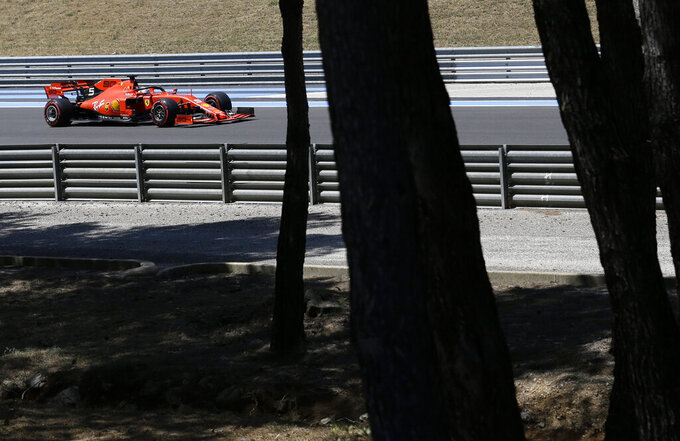 Ferrari driver Sebastian Vettel of Germany steers his car during the qualifying session at the Paul Ricard racetrack in Le Castellet, southern France, Saturday, June 22, 2019. The French Formula One Grand Prix will be held on Sunday. (AP Photo/Claude Paris) 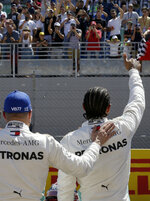 It was a completely different story for Ferrari driver Sebastian Vettel, who qualified only seventh in a race he needs to win to get his increasingly fading Formula One title challenge somehow back to relevancy.

At the same stage last season, Vettel led the championship by one point ahead of Hamilton coming into this race. Now Hamilton is leading with Vettel trailing him by 62 points in third place.

Hamilton, the defending champion, is chasing his sixth world title and has won five of the seven races this season.

"I definitely don't feel untouchable. I never have felt that way," Hamilton said. "But I do feel strong, each weekend I come in and feel I'm starting on the right foot."

Hamilton again surged at the end of qualifying, finishing 0.286 seconds ahead of Mercedes teammate Valtteri Bottas, who was quickest in the first two sections of qualifying and earlier topped the third and final practice.

"Valtteri has been quick all weekend. I am really happy that I got the potential out of the car," Hamilton said. "That's why we're such a strong team. On all elements we're firing on all cylinders."

He credited Bottas for helping him up his level, saying "I'm constantly being pushed by Valtteri."

Bottas, who is driving far better than last year, missed out on a 10th career pole but thinks he has a good chance to pressure Hamilton at the start of Sunday's race.

"Second is a good place here (because) there's a long run into Turn 1," the Finnish driver said. "I think Lewis had a really good lap, and it's been super close between us, and it's all about fine details in qualifying."

"We are quite strong on the straights and they (Mercedes) are strong in the corners," Leclerc said. "So it should be a good race."

However, it was disappointing from Vettel, who took an excellent pole at the Canadian GP two weeks ago. But here the four-time world champion was beaten by McLaren drivers Carlos Sainz Jr. and Lando Norris, a 19-year-old driver competing in his debut F1 season.

"I don't know what happened, I lost so much momentum," Vettel said. "It was up and down. Some laps it felt good and others didn't. I didn't get the best out of the car but it was difficult for me."

Earlier, Bottas was fastest ahead of Hamilton in the third and final practice, giving Mercedes 1-2 in all three sessions.

Leclerc was third best in all three, underlining his consistency this weekend.

He will likely need to produce something special to catch Bottas and Hamilton on Sunday.

Ferrari has not won a race this season, with Mercedes winning all seven — the other two for Bottas.

Vettel thought he should have won the Canadian GP two weeks ago in Montreal. He crossed the line first but was given a five-second time penalty which meant Hamilton won.

Ferrari's request to officially review the decision — in the hope Vettel would get the win — was turned down following a hearing with Montreal's race-day stewards on Friday.

"It was definitely odd coming here when I heard Ferrari was spending time focusing on something else," Hamilton said.

It followed two frustrating seasons in which Vettel led the title race, but then buckled under pressure from Hamilton in the second half of campaigns featuring bewildering strategical team errors on top of Vettel's mistakes.

But this season Ferrari is doing even worse and the strain appears to be getting to Vettel — despite him saying he is not frustrated by his barren streak .

Early into qualifying, Leclerc requested the team to ask Vettel to go faster so Leclerc didn't get held up on the track.

The race engineer asked Vettel: "Can you be faster?"

Vettel gave a strange response: "How much more margin do you need? I'm not trying to kill him, so don't worry."