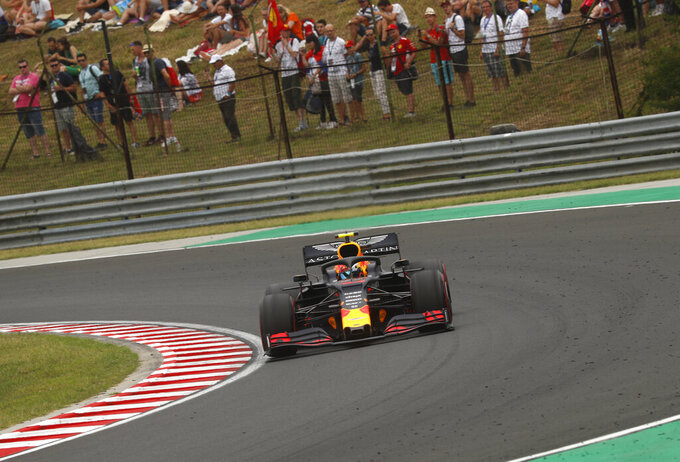 After engine problems ended his first session early, Valtteri Bottas was fourth-fastest behind Mercedes teammate Lewis Hamilton, the championship leader who had the best time in the morning.

Gasly, who is chasing a first podium finish this season, is cautious about whether Red Bull can challenge Mercedes and Ferrari in Saturday's qualifying.

"We have a strong car and the package seems to be working well in both the dry and the wet, but we can't take many conclusions from today with the mixed conditions," the 23-year-old Frenchman said. "I don't know what's going to happen with the weather tomorrow but it could be really unpredictable with more tricky conditions. ... We probably didn't see Ferrari's true pace so we'll find out tomorrow what we can fight for."

With persistent rain making for a slippery circuit, Toro Rosso driver Alexander Albon lost control of his car a few minutes into the second practice and it slid sideways into the barriers at Turn 14.

The red flag came out, suspending the session for a few minutes while Albon's damaged car was removed.

"The weather was really tricky," Hamilton said. "It's quite a dark (track) surface as well so you can't spot the (dry) patches as well so it looks damp all the time."

When the session re-started, most drivers stayed in the garage as teams figured which tire choices to fit. That made for the rare sight of only one car on track — the bright orange McLaren of Carlos Sainz Jr. contrasting with the gray clouds as fans huddled under umbrellas.

With about 20 minutes left in the 90-minute session, drivers started to come out slowly.

"There's no stagnant water but it's wet everywhere," said Vettel, who had the 13th-best time.

Earlier Friday, Hamilton posted the fastest time in the first practice, while Bottas could not even set one.

Bottas, who is fighting for his Mercedes future and crashed last weekend while chasing a podium position at the German GP, headed out onto the track but was recalled by his team after they detected a misfire in the engine and had to change the power unit.

"I lost some power and there was some misfiring," Bottas said. "We decided to swap the power unit in the hope for much more laps, but with the conditions (in the afternoon) we didn't get that many."

Hamilton placed narrowly ahead of Verstappen, who won the rain-soaked and chaotic German GP with a brilliant drive, and .166 clear of Ferrari's Sebastian Vettel in overcast conditions.

"The balance (of the car) seems good, so no real issues," Hamilton said.

Verstappen had a couple of nervy moments, spinning his car twice.

Gasly had the fourth-best time in P1, about half a second behind Hamilton — who finished ninth in Germany but still extended his overall lead over second-place Bottas to 41 points.

The Hungarian GP is the last race of the season before the summer break. The championship resumes with the Belgian GP on Sept. 1.