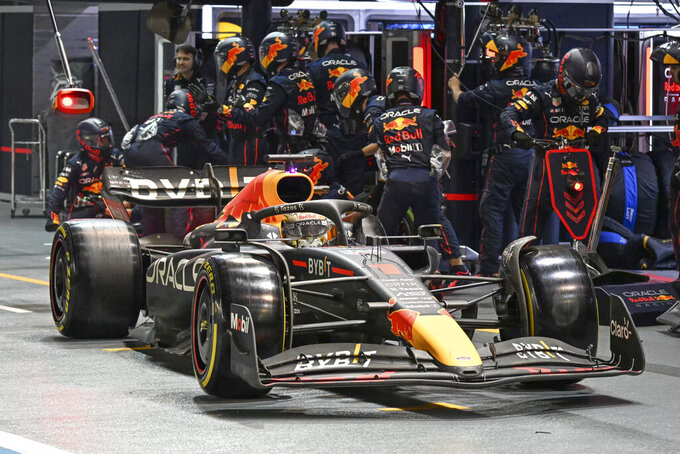 Red Bull driver Max Verstappen of the Netherlands steers his car out of pit lane during the Singapore Formula One Grand Prix, at the Marina Bay City Circuit in Singapore, Sunday, Oct. 2, 2022. (Mohd Rasfan/Pool photo via AP)

PARIS (AP) — Formula One's governing body has delayed publishing the findings of an investigation into whether teams broke the budget cap last season, saying its verdict will come next week.

F1 set a budget cap of $145 million last year, when Red Bull driver Max Verstappen narrowly won his first world title after beating Lewis Hamilton in a controversial finish to the last race. Red Bull team principal Christian Horner last weekend angrily hit back at what he called “fictitious claims” that the team had gone above its budget, which could be punishable by a ban.

The results of an analysis by governing body FIA were initially due Wednesday, with Aston Martin reportedly another team that allegedly breached the cap.

“The analysis of financial submissions is a long and complex process that is ongoing," FIA said on Wednesday. "As previously communicated, there has been significant and unsubstantiated speculation and conjecture in relation to this matter, and the FIA reiterates that until it is finalized, no further information will be provided."

The budget cap was introduced with the aim of making for a more level playing field in F1 and to reduce the spending might of powerhouses like Mercedes, Ferrari and Red Bull.