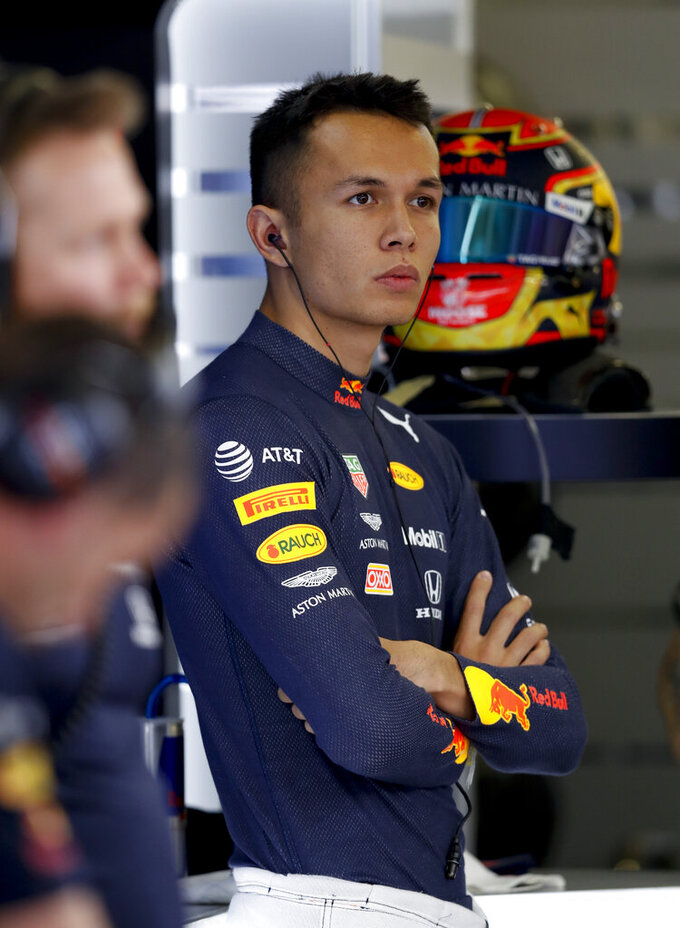 MEXICO CITY (AP) — If Alex Albon still needs to do more to impress Red Bull into signing him for 2020, he'll want a better finish than his start at the Mexican Grand Prix.

Albon has outscored teammate and team leader Max Verstappen since the summer break, but still doesn't have a deal to keep him with the team next season. He came to Mexico City hoping he'll soon secure a contract that will let him finally move out of his parents' home in England.

But like a youngster on a joy ride, Albon skidded and drove his car into a wall in practice Friday, ending a day that got off to good start.

"I just went a bit wide on the curbs and lost the rear. Once these cars snap, they snap quickly and that was that," Albon said. "It was a silly mistake and I paid the price."

And not the kind he wants to be making with his team future in the balance.

The Formula One rookie has been impressive since his promotion from Red Bull's junior team, Toro Rosso, to replace the demoted Pierre Gasly. And while Verstappen has twice had to retire from races after engine trouble and a collision, Albon has been steady and earned 48 points to Verstappen's 31 over the last five races.

His best finish came two weeks ago in Japan, when Albon matched Verstappen in qualifying and finished fourth.

Red Bull team boss Christian Horner has said it's Albon's seat to lose for 2020, but deflected Friday when asked directly about keeping him.

"I think he's doing a very good job," Horner said. "He's certainly impressed the whole team with his attitude, his application and his performance so far.

"The privileged position that we're in as Red Bull with the ownership of two teams is that we don't have to make any firm decision about who partners with Max until the end of the year," Horner said. "We'll take our time."

He has four races left to keep impressing Horner and pave the way for what he hopes will be a more "extravagant" lifestyle out from under his parents' roof near the Red Bull factory.

"I would definitely like to go to London," Albon told the British Press Association earlier this week . "I have been thinking about it, but, again, it is about money."