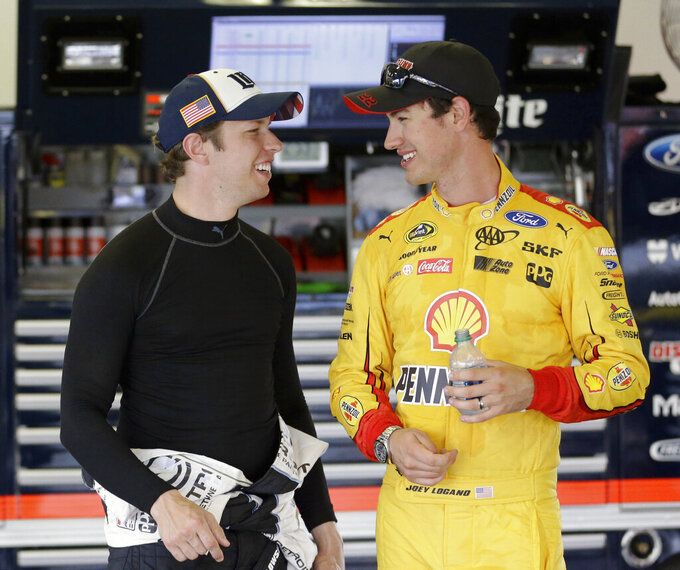 AVONDALE, Ariz. (AP) — Denny Hamlin is 0-for-3 in championship chances, his shot at an elusive first NASCAR crown ending just short each time.

It's his turn again, without rival Kevin Harvick in his way and his Toyota teammates all eliminated. Hamlin on Sunday will try to close his own career-defining season with the Cup title in NASCAR's season finale at Phoenix Raceway.

Hamlin will be racing with Joey Logano and Brad Keselowski, Ford teammates from Team Penske, as well as NASCAR’s most popular driver. Chase Elliott last week drove Chevrolet and Hendrick Motorsports back into the championship race for the first time since 2016.

Elliott's win at Martinsville put him on NASCAR's biggest stage for the first time in his career, but the upset also bounced Harvick out of the finale. Harvick won a Cup Series-high nine races and was the regular-season champion, and Harvick and Hamlin went head-to-head nearly all summer in a rivalry worthy of NASCAR's golden days.

Harvick's elimination theoretically made Hamlin the favorite. He won seven races this season and the title for the first time is being decided at Phoenix, where Hamlin is a two-time winner including last November when he raced his way into the championship four.

The Cup is now his, right?

“I think it’s unlikely anyone considers us an underdog, especially our competition,” said Hamlin.

All four of the finalists are confident they will take the winner-take-all showcase of a grueling season. NASCAR was among the first series to resume racing during the pandemic, returning in May with a rebuilt schedule as NASCAR worked to get venues open across the country.

It took doubleheaders, midweek races and one-day shows to get to Phoenix, where the highest finisher of the final four wins the championship. The champion has also won the race — at Homestead-Miami Speedway, however — every year since this format debuted in 2014.

Harvick is a nine-time winner at Phoenix. Yet all four remain convinced they will win the race.

Logano won Phoenix in March, the final race before the 10-week shutdown. He has zero friends on the race track and on Sunday that will include his Penske teammate. Logano has made it to the championship race four times and is the only one of this year's finalists to win the title in this format, in 2018 when he won Homestead and the title.

Keselowski won the 2012 title under a different format and has been to the final four only once. He brought to Phoenix the tall beer glass he chugged from on TV after his first championship, when he accidentally caught a buzz while celebrating post-race.

Logano and Keselowski this year adjusted to new crew chiefs after Roger Penske's offseason three-team swap. They've done it without practice or qualifying, and many remote meetings. Keselowski was in a contract year, earned a one-year extension and a title could lead to a renegotiation.

“We don’t have any team orders," Penske said. “They’re going to race their hearts out. We’re going to execute in pit lane. The best driver is going to win out of the two.”

Then there's Elliott, ready to prove he can deliver on the track. The 24-year-old is statistically enjoying his best Cup season and advanced to the final four after three previous failures. Just getting into the finale checks multiple boxes for Elliott, who carries the weight of Hendrick and Chevrolet's long drought.

He's leaning on his father Bill Elliott, a NASCAR Hall of Famer and the 1988 Cup champion, for advice on racing for the biggest trophy.

“My dad obviously has had great success over the years, has been around this deal for a long time,” Elliott said. "The big thing from talking to dad ... is just enjoy these moments because these aren’t things you can take for granted.

“I feel like that’s where I’m at right now. Try to make the most of a great opportunity.”

Hamlin has been here before. He coughed away a title to Jimmie Johnson in 2010 when Johnson won for a record fifth consecutive time, then lost because of late race strategy screwups in 2014 and 2019.

Last season was particularly brutal: Hamlin was in contention until a late pit stop, when his Joe Gibbs Racing team slapped a huge piece of tape across the front of his Toyota in a misguided aerodynamic adjustment. Hamlin has been close enough to suffer heartbreak, but insists he's handled the disappointments much better than he did in 2010, when he used a sports psychologist to deal with the defeat.

“All I can do is control what I can control, and I’ll live with the result no matter what that is,” Hamlin said. “I won’t second-guess any moves that I make, and last year I had no regrets. The last two times I’ve raced for championships I’ve had no regrets.”

Hamlin turns 40 exactly 10 days after Sunday's title race and has matured greatly the last several seasons. He opened this year with his third Daytona 500 win and took an active role in the online iRacing that carried NASCAR through its shutdown.

He's already thinking about his future in NASCAR and in September announced that he partnered with Michael Jordan to field a race team next season for Bubba Wallace. Winner of 44 career Cup races, he and Mark Martin are considered the best NASCAR drivers without a title.

Martin, a Hall of Famer and winner of 40 races, finished second in the championship hunt four times.

“I never would consider any comparison to Mark Martin an insult. I’ll take those comparisons all day because the guy is a ... driver that nobody wanted to face,” Hamlin said. "Championships, I get it, it’s very, very important. But I also know that my competitors will probably say that I’m one of the toughest competitors and toughest guys to beat.

“That’s all I really care about, is having the respect of them ... and knowing that over the last two years, ain’t nobody won any more. I like where I’m at.”