Column: Ganassi saw writing on wall for his NASCAR future 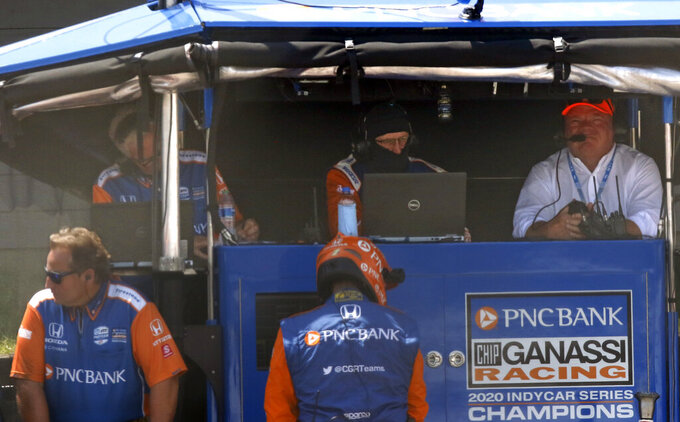 LEXINGTON, Ohio (AP) — After telling the world he was pulling out of NASCAR, Chip Ganassi returned home to Pittsburgh for sushi dinner with drivers Kevin Magnussen and Renger van der Zande, his house guests for a week between sports car races.

Then Ganassi went back to work and his first stop was Watkins Glen, New York.

Magnussen and van der Zande didn't win the IMSA race — “first loser, P2,” Ganassi said — before Ganassi headed to Mid-Ohio Sports Car Course to spend the Fourth of July with his IndyCar team. It was P2, again, but Marcus Ericsson, IndyCar championship leader Alex Palou and Scott Dixon showed the strength of the organization with a 2-3-4 finish.

Justin Marks and Trackhouse Racing bought Ganassi's NASCAR team effective at the end of this season, but the weekly grind of motorsports won't stop for the 63-year-old lifelong racer.

“There’s a lot of racing that goes on in this world that we’re still involved in," Ganassi said at Mid-Ohio. “When you look at the calendar, it frees up a little of my time, but not a lot."

Ganassi built one of the top organizations in motorsports long before he waded into NASCAR in 2001 as the sport was exploding in popularity. His cars won 19 races in the nation's top stock car series but never a title. The closest Ganassi ever came to a championship was in 2002 when Sterling Marlin led the points for 25 consecutive weeks in a season cut short by injury.

His two decades in the series weren't a bust. Ganassi formed a friendship with NASCAR chairman Jim France and took chances on drivers — he brought Juan Pablo Montoya back to the United States from Formula One to race in NASCAR, and he gave three-time Indianapolis 500 winner Dario Franchitti a shot in the series.

In 2010, Jamie McMurray won both the Daytona 500 and the Brickyard 400, but Ganassi also won the Indianapolis 500 and IndyCar title with Franchitti and all six of his drivers won at least one race for a total of 19 Ganassi victories across three different series.

“How many people do that?” Ganassi said. “No one ever keeps that kind of stat, but you could spend the rest of your life trying to be better than we were in 2010.”

When NASCAR's commercial market began to crash, Ganassi suffered as much as any organization. He lacked the business-to-business opportunities his rivals with primary companies used to adjust to the new sponsorship models. Sponsors such as Coors Light, Texaco/Havoline, Wrigley's and, after a 27-year partnership, flagship backer Target, all pulled out.

“I took a lot of body blows,” Ganassi said.

He's been clawing his way back the last several years but the hits just never seem to stop coming. Ganassi was forced to fire Kyle Larson, the driver he'd developed since Larson was 19, when sponsors threatened to leave over Larson's use of a racial slur in 2020.

Now driving for Hendrick Motorsports, Larson has a Cup Series-high four wins and is a title contender with increasing interest from companies with money to spend.

DC Solar was scheduled to be a major sponsor in 2019 but was raided by the FBI in December 2018. The financial fallout is winding through the courts and Ganassi may have to repay some of the funds the team received.

He is also in a contract year with Kurt Busch, who is tied to primary sponsor Monster and can take the funding with him if he leaves after the season. Should Monster move, Ganassi would have been left with huge funding shortage to fill for 2022.

There's a flurry of new ownership entering NASCAR — Michael Jordan with Denny Hamlin and Marks with Pitbull were two of three new teams this season, and others may arrive in 2022. Ganassi never caught the likes of Hendrick, Joe Gibbs Racing and Team Penske in two decades of trying, and young new owners are now elbowing their way in.

Ganassi had become the middle class, with no secure path to join the elite.

“You look at it and it's like, ‘What am I doing?’ Do I owe this all to the racing public to risk this every year and all my winters are a bundle of nerves trying to find sponsors?" Ganassi asked. “I'm so tired of that.”

The decision to sell the entire NASCAR portion to Marks — Ganassi will essentially hand him the keys to the shop after the November season finale — was a bombshell no one saw coming but it makes so much sense.

“I think not knowing where Kurt's going, there's a lot of questions and someone came to him with an offer he couldn't refuse,” rival owner Roger Penske said after Josef Newgarden was the only driver to beat the Ganassi camp at Mid-Ohio on Sunday.

“He had a lot of options and NASCAR is not his only life or his only racing operation. He thought about it as a businessman and said ‘Hey, where can I be? I want to be in racing and I built this brand and reputation and it certainly wasn't built all in NASCAR,'" Penske said. "What he's doing is continuing to cultivate the greatness he had in IndyCar. I was surprised, but when you look at all the facts, it was probably a good move.”

And there is so much to do.

Ganassi said he would like to move Magnussen from IMSA to IndyCar and would expand to a fifth car if he found the sponsorship for the former Formula One driver. Magnussen himself asked Ganassi over sushi in Pittsburgh if the sale of the NASCAR team freed up funds for a seat.

Ganassi also is awaiting General Motors' plans for a new LMDh car that could return his IMSA team to the 24 Hours of Le Mans in 2023, is in his first season with an Extreme E team and has a championship to win in IndyCar. He' will ride out the remaining 16 races of the NASCAR season and hope both Busch and Ross Chastain qualify for the playoffs.

And even though his NASCAR team was not for sale when Marks cold-called him, Ganassi applied a firm business belief he holds in weighing the emotional aspect of the transaction.

“I’ve always said, if you have your largest two or three assets and somebody ever wants to buy, you need to look at it — whether it's your car, your house, your business. Somebody wants to buy that stuff, you got to look at it, you can always buy another one," Ganassi said. “There’s just a lot of things that made this seem like the right time. I had a great time while I was there. Looking back, I would say this was all very positive.”