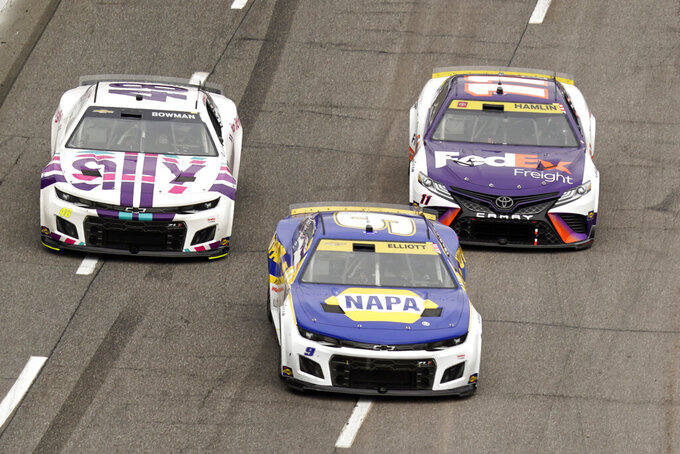 Last year: Kyle Larson started from the pole and won his 10th race of the season and first title, holding off Martin Truex Jr.

Fast facts: The final four includes Team Penske's Joey Logano and Hendrick Motorsports' Chase Elliott, who will be chasing their second Cup titles, and Christopher Bell of Joe Gibbs Racing and Trackhouse Racing's Ross Chastain, newcomers seeking their first. ... Bell, the lone Toyota driver in the final four, won three races, two in the playoffs, and has an average finishing position of 17th at Phoenix Raceway, including two top-10s. .... Chastain has career driver rating of 57.7 at Phoenix, last among championship four. ... This is Elliott's third appearance in the final four and he has five career top-five finishes at Phoenix with an average starting position of 5.6. ... Logano has three wins this season and two career wins among his 15 top-10 finishes at Phoenix.

Last race: Ty Gibbs wrecked teammate Brandon Jones out of the lead in the third overtime to capture a controversial victory at Martinsville. Gibbs joins Justin Allgaier and JR Motorsports teammates Noah Gragson and Josh Berry in the race for the title.

Fast Facts: Majeski is making his first appearance in the final round of the playoffs and has two wins, 10 top-5s, and 15 top-10s to go with three poles. ... Zane Smith, runnerup the past two seasons, is in the final round for the third straight year. He has three wins, 13 top-5s and 18 top-10s and has led 415 laps. ... Ben Rhodes is seeking to join Matt Crafton as the only drivers in the series to win back-to-back championships. He has one win, seven top-5s, and 12 top- 10s. ... Chandler Smith, making his first appearance in the final four, has three wins, eight top-5s, and 15 top-10s along with 440 laps led.

Last event: Max Verstappen set the Formula One record for wins in a season at the Mexico City Grand Prix, where he scored his 14th win to break the record shared with Michael Schumacher and Sebastian Vettel. Schumacher set the record in 2004, Vettel tied it in 2013.