Too dusty: NASCAR working on visibility at dirty Bristol 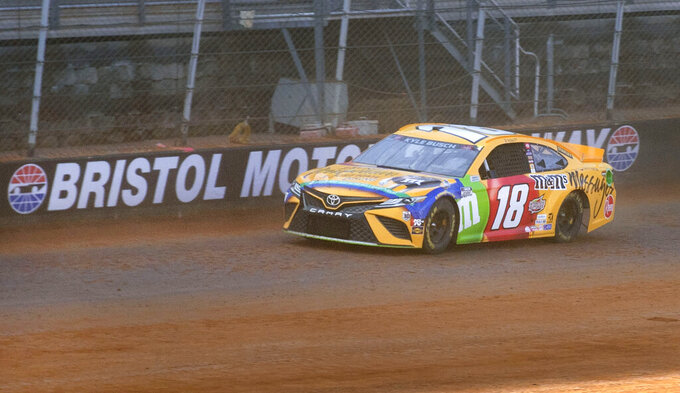 FILE - Kyle Busch drives along the dirt track during NASCAR Cup Series practice, Friday, March 26, 2021, at Bristol Motor Speedway in Bristol, Tenn. NASCAR has taken its new car to a short track, a superspeedway and a road course. Now the Next Gen races on dirt for the first time Sunday, April 17, 2022, at Bristol Motor Speedway, a beloved short track that has been covered in red Tennessee clay for a second consecutive year. (David Crigger/Bristol Herald Courier via AP, File)

BRISTOL, Tenn. (AP) — Kyle Busch took a long pause to carefully choose how to describe visibility Friday in the first practice on the dirt at Bristol Motor Speedway.

“So far better, I guess?” Busch said. “But second half of that practice, you couldn't see. You put one car in front of you and you can't see. Two cars? You definitely can't see. That's going to be the toughest part, the dust.”

NASCAR brought the Cup Series back to the Tennessee dirt for a second consecutive year as Speedway Motorsports transformed its Bristol bullring for a Sunday night race. It will be the first time NASCAR races on Easter Sunday in more than 30 years in a scheduling choice by Fox Sports to attract more eyeballs.

The race will run at night after the first dirt Cup race since 1970 last year had mixed results. The 30,000 tons of red Tennessee clay used to cover the concrete made Bristol a dustbowl that had dangerously poor visibility when combined with the glare of the sun.

“We have to race at night,” said Joey Logano, who won the Bristol dirt race last year. “That was important. Because you just couldn’t even see the cars, and it was unsafe inside the car.”

Speedway Motorsports made changes to the track, as well, knocking 3 degrees of banking off to make it 16 degrees at the apron; the track gets progressively steeper closer to the wall. It was done to create multiple racing lines and prevent too much rubber grinding into one slick lane.

Reigning Cup champion Kyle Larson believes more could have been done, specifically the removal of windshields. He feels NASCAR is wasting its time running a pseudo-dirt race and not adopting all of the elements that make the formula a fan favorite.

Larson and Austin Dillon last year were the two main drivers advising Bristol and NASCAR on track prep and both have argued the dirt can't be watered down and made moist enough with the windshields because they'd become caked with mud. The dirt is instead watered just enough — and that creates the blinding dust the drivers complained about.

Scott Miller, NASCAR’s senior vice president of competition, told SiriusXM NASCAR Radio this week that racing without a windshield — which NASCAR tried during a test of the Next Gen car on dirt with driver Stewart Friesen — is too risky.

“The windshield is a critical safety component of our cars,” Miller said. “Highly developed laminate. Really resistant to intrusion of foreign objects. Until we can further vet the possibility of not using a windshield, (we’re going to) stick with the safety element of what we’ve been doing.”

Larson said NASCAR replaced the windshield at the test with chicken wire and the mud that slipped through allegedly stung Friesen’s hands as he drove.

“I would not have felt safe with what they had for testing," Larson said. “With them putting chicken wire in it, it probably didn’t look like they worked on it very long, like maybe last-minute. I feel like if they would’ve worked on it months ago, then they probably would’ve come up with something safer to put in to keep big things from coming in the cockpit.”

So many drivers have very little experience racing on dirt so they've entered the Truck Series race on Saturday to get extra seat time.

Among those racing Saturday is defending race winner Logano. He and Harrison Burton will both drive for David Gilliland Racing. Austin Dillon will drive for Young’s Motorsports and Chase Elliott will drive for Spire Motorsports, which won last week at Martinsville with William Byron.

The field will be set by heat races and the lineups will be done in a random draw. Drivers will get points to be used to set their starting position Sunday based on where they finish in the heats on a 10-to-1 scale. There is an additional point available for every position improved from where they started the heat to where they finished. Ties in overall points will be broken by owner points.

NASCAR will use double-file restarts but have the option to go single-file for safety purposes. There will be no live pit stops and teams can only change tires and add fuel during the stage breaks, which will be six minutes.