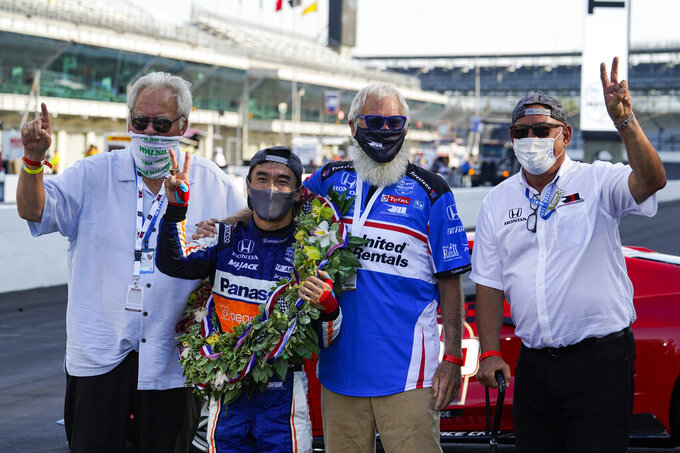 INDIANAPOLIS (AP) — Takuma Sato won't waste any time wondering what might have happened if his teammate had not crashed in the closing laps of the Indianapolis 500.

Sato could have run out of gas.

IndyCar maybe would have have thrown the red flag, setting up a final shootout to the finish.

It's just a silly game of hypotheticals after Sunday's race ended under caution with Sato coasting to his second Indy 500 win in four years. Spencer Pigot crashed with five laps remaining to bring out the yellow flag, pausing Dixon's charge on Sato for an anticlimactic ending to “The Greatest Spectacle in Racing."

“The Indy 500, you never really know until the last corner,” said Sato, the only Japanese driver to win the Indy 500 and now the 20th two-time winner.

Dixon seemed in total control of the race as he chased his own second Indy 500 win. The five-time series champion easily slid past pole-sitter Marco Andretti in the first turn of the first lap and led 111 of 200 laps.

Dixon was so smooth he, at times, voluntarily relinquished the lead just to save fuel. So when Sato moved to the front late in the race, it appeared Dixon was just biding his time. Only he didn't get close enough as the laps ticked off — 20 to go, 15 to go, 10 to go — and then Pigot's crash ended the pursuit.

“I probably should have been more aggressive there. Should have maybe gone harder and maybe he would have run out of fuel," Dixon said. "This is definitely hard to swallow for the team. But it was a hell of a race, and he’s victorious. He’s drinking the milk, and that’s all that counts.”

Sato indeed chugged from a bottle of two-percent milk, kissed the bricks, and rode the new lift at Indianapolis Motor Speedway to the winner's circle. It was there that he celebrated with two of his team owners — 1986 Indy 500 champion Bobby Rahal, who was walking with a cane because of an aching back, and comedian David Letterman, who loomed large over Sato with an unruly gray beard and mask covering half his face.

Rahal had no interest in debating IndyCar's decision to finish the race under yellow and defended Sato's earned spot in Indy 500 history.

“Hey, two-time winner at the Indy 500, there’s not many of those guys out there,” Rahal said. "I think the guy deserves to be highly respected for his abilities, particularly on the ovals. I think a place like Indianapolis kind of suits his skills because he’s very smooth, obviously he’s quite brave. He really has a good feel. I think that really works well at a place like Indy.

“He’s all fight. He’s not a guy that’s going to give up. I think we saw that today.”

Sato's second victory came in front of empty grandstands at the largest venue in the world. New track owner Roger Penske could not allow spectators during a pandemic at an event that typically draws more than 300,000. On Sunday, Penske said a mere 2,500 people would be on property.

The eerily empty venue made for a watered-down celebration absent of many of the Indy traditions.

He didn't complain, but noted the energy was off the entire two weeks at Indy and the empty gray grandstands were a sad sight every lap.

“If you go through Gasoline Alley each morning, there’s no energy. It was a little sad,” Sato said. "When you’re driving, obviously we're concentrating on what’s happening on the track. But we see the grandstands all the time.