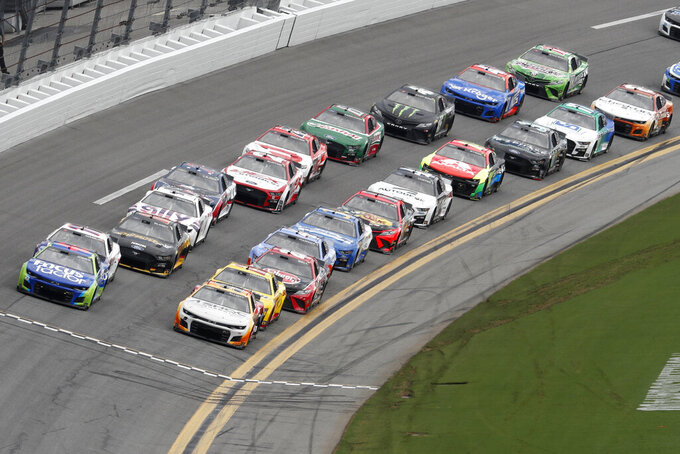 The NASCAR Cup Series playoffs open this weekend at Darlington Raceway in South Carolina. A look at the 16 drivers who reached the postseason, from the top seed to No. 16:

NOTEWORTHY: NASCAR’s most popular driver and the 2020 Cup champion leads the Cup Series this year with four victories and is the regular season champion. He’s the top seed in the playoffs and opens the first round with a 15-point advantage.

NOTEWORTHY: Logano has wins at Darlington and Gateway this season. He also won the first race in the Next Gen car in The Clash, a preseason exhibition race at Los Angeles Memorial Coliseum. Signed a long-term extension with Team Penske in August.

NOTEWORTHY: The eighth-generation watermelon farmer is a journeyman driver who finally got his big break this season when he was held over in Chip Ganassi Racing’s sale to TrackHouse Racing. His two wins this season were on the road course at Circuit of the Americas and Talladega Superspeedway. Has angered many top Cup drivers with his aggressive driving style and the verb “Chastained” has developed for when Chastain crashes into another car.

NOTEWORTHY: A year after a record-breaking season in which he won 10 races and the Cup title, Larson has just two victories and angered teammate Chase Elliott at Watkins Glen by racing him off the track on the final restart. Larson limps into the playoffs coming off a DNF in the regular season finale.

NOTEWORTHY: Byron needed a win in last year’s regular season finale to make the playoffs but locked down his spot quickly this season with a win at Atlanta in the fifth race. He also won at Martinsville, site of the penultimate race in the playoffs.

NOTEWORTHY: Has successfully juggled his driving career and his second season as owner of 23XI Racing while taking a leadership role in NASCAR. Has wins this year at Richmond and the Coca-Cola 600. As an owner, guided 23XI driver Kurt Busch into the playoffs until Busch withdrew his spot because of concussion symptoms.

NOTEWORTHY: Blaney barely made the playoffs and edged Martin Truex Jr. for the final spot in the field on points. The two were locked into a points fight over the final month of the regular season as both were winless, but also high-ranking teams. Blaney’s only win came in the non-points All-Star race, but his consistency ranked him in the top five in the regular-season standings all year. Signed a long-term contract extension with Team Penske in August.

NOTEWORTHY: The two-time Xfinity Series champion earned his first career Cup victory with a win at Road America and then informed RCR he was leaving at the end of the 2023 season for 23XI Racing. He then added a second victory at Indianapolis Motor Speedway.

NOTEWORTHY: Snapped a 65-race losing streak dating to 2020 with back-to-back wins at Michigan and Richmond in August that gave the 2014 champion momentum headed into the playoffs.

NOTEWORTHY: Returns to the playoffs for the second consecutive year. Earned his berth with a win at New Hampshire with seven races remaining in the regular season.

NOTEWORTHY: His only win of the season came on the dirt at Bristol Motor Speedway and Busch is statistically having an off year. He’s also in the final year of his contract with Joe Gibbs Racing and his lack of plans for 2023 has been a major distraction to Busch.

NOTEWORTHY: Earned his first playoff berth very early in the season when he won at Phoenix in the fourth race of the year. He joined former Xfinity Series rival Austin Cindric as first-time Cup race winners -- a group that has since expanded to include Ross Chastain, Daniel Suarez and Tyler Reddick.

NOTEWORTHY: Is having the best season of his six-year Cup career. He scored his first career victory on the road course at Sonoma and is the only foreign-born driver in the playoff field.

NOTEWORTHY: The rookie driver for Roger Penske rewarded his boss on his 85th birthday by winning the season-opening Daytona 500. Added top-three finishes at Atlanta and Indianapolis.

NOTEWORTHY: Bowman has settled into his second season as the replacement for seven-time NASCAR champion Jimmie Johnson and is one of a very few number of drivers with full sponsorship from a single company. His one win this season was at Las Vegas.

NOTEWORTHY: Grabbed the final spot in the playoff field by winning the regular-season finale at Daytona. The race was postponed by rain from Saturday night to Sunday morning and had another delay of more than 3 hours right after Dillon took the lead. He bumped Austin Cindric out of his way to become the 16th different winner this season. It knocked Martin Truex Jr. from the field and put both of Richard Childress’ cars in the playoffs.