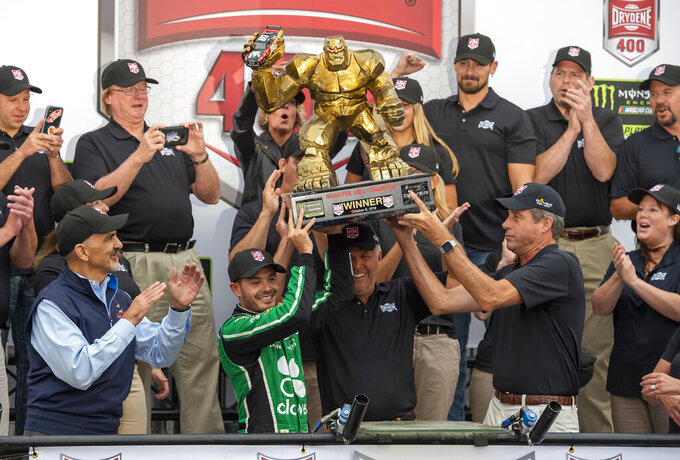 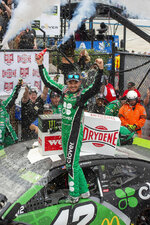 DOVER, Del. (AP) — Kyle Larson was the can't-miss future star who tore up the sprint car circuit and would lead a new generation of young stars into the next era of NASCAR.

His promise yet unfulfilled, Larson's path toward prominence has been slow burning in six-plus years in the Cup Series. He's been saddled with mediocre cars that not even his raw talent could salvage, and a fantastic 2017 was more a blip than a sign Larson would blossom into a perennial championship contender.

But as Larson stood atop his Chevy with a two-year winless streak behind him, perhaps his playoff victory Sunday at Dover International Speedway was indeed a preview of a championship celebration ahead.

"It's not a shock, either," Larson said. "I feel like we've been running really well this year."

Larson's wife, Katelyn, shot-gunned a beer in a sudsy victory lane bash as he flashed a No. 1 sign behind her, a worthy way to end a 75-race winless streak.

The 27-year-old Larson has been oh-so close toward grabbing the checkered flag since his last win Sept. 9, 2017, in Richmond. Larson had nine runner-up finishes in the No. 42 Chevrolet over that span and won the $1 million NASCAR All-Star race this season.

He cashed in at Dover with the Monster Mile-stone win (it was the track's 100th race) that earned him an automatic berth into the third round. Not only has Larson failed to win a title, long-time team owner Chip Ganassi has never won a NASCAR Cup Series championship, something that's surely chapped an organization with handfuls of IndyCar titles.

"It would be nice to get him that championship that, honestly, he's probably owed," Larson said.

Larson had four of his six career Cup wins in 2017 and Dover marked his first one in the playoffs. He led 154 laps late after Denny Hamlin faded from a dominant early run (he led 219 laps) in the No. 11 Toyota that opened the door for Larson. Playoff drivers took the top six spots: Martin Truex Jr. was second, followed by Alex Bowman, Kevin Harvick, Hamlin and Kyle Busch. Chase Elliott and reigning series champion Joey Logano both suffered serious blows to their championship runs with a rough start to the second round.

Truex won the spring race at Dover and didn't have enough down the stretch to catch Larson and complete the season sweep.

"We just ran out of time," Truex said.

Larson felt like a win or two was within reach on the strength of a sensational late-summer run of top-10 finishes. Larson escaped the first round without any serious drama and can now head to treacherous Talladega and then Kansas to end the second round without any serious concerns. He's the first driver of the 12 contenders in the field of eight.

"Everybody in this playoff field is going to be stressing next week at Talladega except for me, so that's good," Larson said. "Last time I was at Talladega I was on my lid. I could still end up on my lid next week, but it's not going to matter after this win.

Larson was expected to help bridge the gap between grassroots racing and NASCAR when Ganassi hired him before the 2012 season. Larson made his name by racing all over the country in any series where he could find a ride. Larson counted 92 races in 2011 and 123 races in 2012 and continued to race in the dirt even when he landed his ride with Ganassi. Larson had talked of wanting to pattern his career after someone like Tony Stewart, who started his career on dirt tracks in open wheel cars. Stewart in turn guaranteed Larson, who is half Japanese, would be the next big thing in NASCAR.

"If not, you can take everything I own, because I'm that confident," Stewart said years ago. "It's not a matter of if, it's when."

Larson's not there yet — but just maybe he's getting there.

Here's what else happened at Dover.

Logano and Elliott both had their races ruined before the race even finished 10 laps. Logano failed to start the race because of a broken axle on the No. 22 Ford. He eventually hit the track more than 20 laps down and finished 34th.

"We just used our mulligan up," Logano said. "We're not a must-win but we must do really well in the next two races."

Elliott, who won last week at Charlotte, had the engine in his No. 9 Chevrolet blow up just laps into the race and he finished last.

Elliott won Dover last season and can't afford another major slip-up to make the third round.

"I don't know where we'll stack up," he said. "I assume we'll have to win one of these next few weeks. If you ever make it to Homestead, you're going to have to win down there."

Clint Bowyer and Ryan Blaney join Logano and Elliott as the bottom four drivers in the playoff field.

NASCAR heads to Talladega Superspeedway where Aric Almirola is the defending race winner.