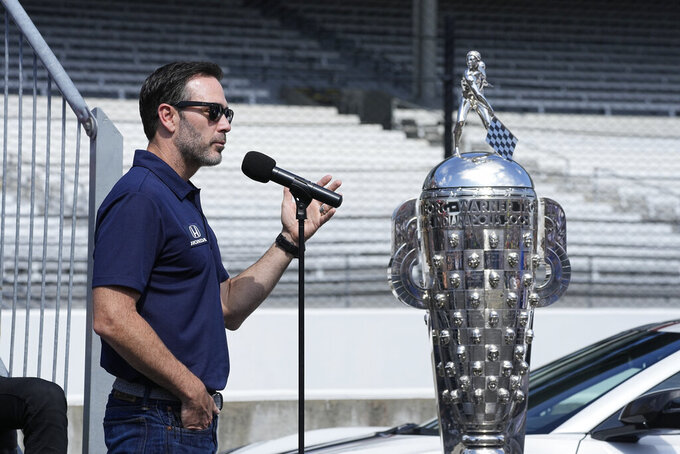 Jimmie Johnson speaks during the drivers meeting for the Indianapolis 500 auto race at Indianapolis Motor Speedway, Saturday, May 28, 2022, in Indianapolis. (AP Photo/Darron Cummings) 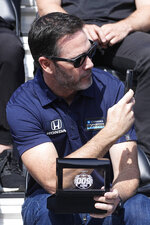 All that’s left for the 46-year-old Indy rookie is winning the race.

Johnson has had the confidence of a champion at Indianapolis Motor Speedway. His team owner noticed. So have other Indy drivers. Even former competitors in his old NASCAR life are watching how Johnson fares at the Brickyard.

He’s not the favorite Sunday to win the 106th Indianapolis 500, but Johnson is the driver to watch for good reason: A victory in his first try would put Johnson alongside A. J. Foyt and Mario Andretti as the only drivers to win both the Indianapolis 500 and the Daytona 500.

If Johnson pulls it off, just try to argue he’s not one of the greatest ever in American motorsports.

It’s not like he wasn’t already in the conversation.

That’s the wild part. Johnson doesn’t even need to be soaking in the sights and sounds among the bricks, the milk, the belting out of “Back Home Again in Indiana.” He won 83 times in NASCAR, claimed a record-tying seven NASCAR championships and could have walked away from racing after 2020 with his legacy secure.

But instead of enjoying the riches and spoils of his fame, or settling into a comfortable retirement with his wife and two young daughters while splitting time between his lavish homes, he was drawn to Indianapolis and the lure of open-wheel cars.

Johnson jumped to IndyCar last season to drive for Chip Ganassi Racing. But he skipped the ovals, where speeds top 200 mph and danger beckons on every turn. Johnson’s wife, Chani, had deep apprehension about the safety of open-wheel racing and the driver respected her concerns.

His first Indianapolis 500 was last year, only as an NBC Sports analyst and sidelined in street clothes.

Johnson was instantly hooked on the pageantry and the thrilling ending. For a driver with speed in his DNA, he could not sit out the race again.

He convinced his wife that safety advancements such as the cockpit-protecting aeroscreen lessened the risk in open-wheel racing of deadly injury. So he's back at the Brickyard in the familiar No. 48 and he’s in Indy to win it — with his dad along for the ride working as a spotter.

Dale Earnhardt Jr., a former NASCAR teammate with Johnson at Hendrick Motorsports, empathized with Chani Johnson’s fears of watching Johnson try to tame the crowded field and the risky maneuvers required at Indy.

“I am full of anxiety that he’s going to push, push, push too hard, and somehow that might put him in a bad situation,” Earnhardt said. “He’s gotten so, so close a few times already this month to some bad situations. But he’s a pro. You trust that he knows what he’s out there doing, understanding the limits of the car.”

Johnson scared even himself during qualifying when he wrestled his car out of a sideways slide that seemed headed toward a massive crash at 230 mph. He lost his shot at the pole and starts 12th. He’s on the outside of Row 4 with former Indy 500 winners Will Power and Takuma Sato.

But Johnson is the A-lister at Indy. He has made the promotional rounds from late-night TV shows to early morning risers, traditional sports programming and even People magazine.

Everyone wants a slice of Johnson’s time and he’s squeezed in all he could — hustling out of the media center straight to the paddock to prep for final practice after his longtime public relations representative received a prestigious award.

He’s done it all while tailed by a camera crew for a documentary series made in part with sponsor Carvana entitled “ Reinventing The Wheel."

Indy fans love him, and Johnson got the loudest ovation Saturday when he was introduced at the track at the public drivers’ meeting.

“It’s been cooler and more amazing and fun than I could have ever dreamed of,” Johnson told the crowd as he stood a foot or two away from the Borg-Warner Trophy.

Johnson, who said he’s open to competing in the Indy 500 and then the Coca-Cola 600 on the same day, won four times at the Brickyard in NASCAR. But the childhood dream of chugging milk and celebrating as the Indy 500 champion faces stout obstacles, starting within his own team. He has the worst starting spot of the five Ganassi qualifiers; teammate Scott Dixon is on the pole.

It’s rare for rookies to win, though Juan Pablo Montoya (2000), Helio Castroneves (2001) and Alexander Rossi (2016) have accomplished the feat. The common thread with Johnson: All were veterans of other racing series.

Johnson’s IndyCar results have been more middling than menacing, with no podium finishes in 17 career races. But he ripped off the blinders in March at Texas Motor Speedway and finished sixth in his first career open-wheel race on an oval track.

Not bad — and perhaps a sneak peek that contention lies ahead.

“I’m just pulling for him to have a great experience in the race and have a result that he can be happy with and smile about in the end,” Earnhardt said.

Johnson will be plenty happy if he can kiss the bricks one more time at racing’s most storied track.