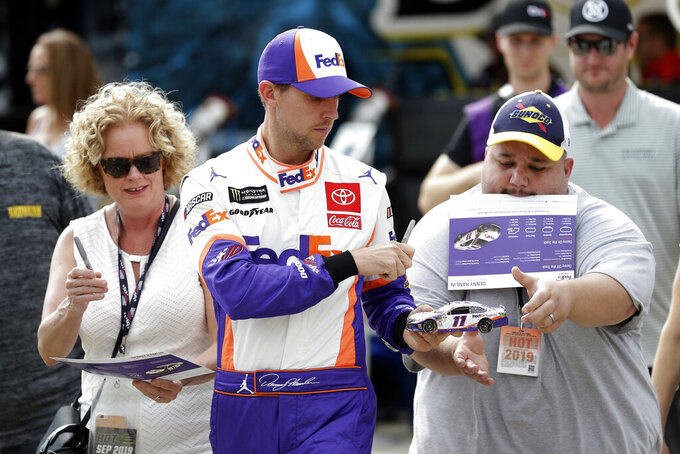 He's also missing a Cup championship, conspicuous by its absence on a resume that boasts 35 wins over 499 career starts. Hamlin took a nice first step toward erasing his winless drought at Dover International Speedway when he turned a lap of 166.984 mph to start the second round of the playoffs on the pole. That championship that sits just seven races away, well, Hamlin believes it's his for the taking.

"Even though I've had past stumbles here, and it hasn't technically been my best race track, we know we are fully capable of winning at any race track," Hamlin said. "It doesn't matter what the past history is."

Hamlin has never won on the mile concrete track in 27 races dating to 2006. He has only four top-five finishes, did not finish four times and his average finish is just 17.5. He finished 21st in the No. 11 Toyota in the May race at Dover.

But to win a championship, a driver must often excel in crunch time on a track that gives him fits. With four wins this season, Hamlin is enjoying a renaissance with new crew chief Chris Gabehart. Hamlin said the chemistry gives him confidence to remain in championship contention.

"I think a lot of it comes from the crew chief," Hamlin said. "I think that he's done a phenomenal job when you go back to races for the second time, adjusting based off the information that I gave him. I think that's been our strong suit."

Hamlin will lead the field to green in his 500th career NASCAR Cup Series start. Richard Petty at Trenton in 1970 and Matt Kenseth at New Hampshire in 2013 are the only drivers to win their 500th start.

JGR has 15 wins this season and needs three more in seven races to match Hendrick Motorsports' record total of 18 in 2007.

"I told Denny a few days ago that I was going to get the pole. So, having him be just a little bit quicker than me is frustrating," Larson said.

Kyle Busch was the worst qualifier among the 12 playoff drivers and starts 18th.

Four more drivers will be eliminated at the end of the round, which also includes Talladega Superspeedway and Kansas Speedway.

Elliott and Bowman are the only drivers who finished in the top five in the spring races at each of the second-round tracks. Elliott's 4.3 average finish at Dover is tops among the 12 playoff drivers, and Larson's eight top-10s at Dover are the most for him at any track.