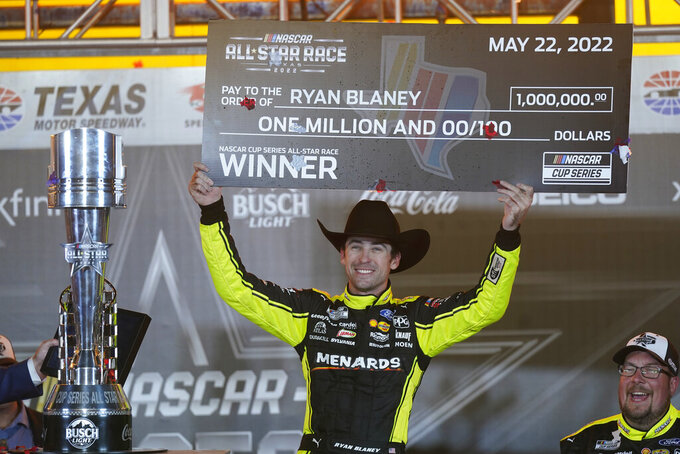 Ryan Blaney (12) hold up the first place check while celebrating in Victory Lane after winning the NASCAR All-Star auto race at Texas Motor Speedway in Fort Worth, Texas, Sunday, May 22, 2022. (AP Photo/LM Otero) 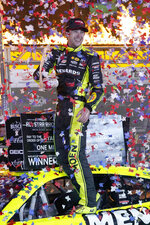 FORT WORTH, Texas (AP) — Ryan Blaney is talking about framing the window net from his No. 12 Ford, the one he somehow got secured enough to run two extra laps and win NASCAR's All-Star race and $1 million — after he and Team Penske thought they had already won once.

“This is oddly unique,” Blaney said. “I’m never going to forget this one."

Such an odd night that NASCAR admitted afterward that the last-second caution in a race that had to end under green probably shouldn't have been called. Even runner-up Denny Hamlin agreed to that, but was frustrated that Blaney wasn't black-flagged for dropping his window net when initially thinking that Sunday night's race was over.

“Obviously Ryan Blaney thought he won the race,” said Scott Miller, NASCAR’s senior VP for competition. “That’s another byproduct of kind of special rules of the All-Star, because every other race that we do besides this one, he would have won the race when the caution flag came out.”

Miller said it was obvious to everyone that NASCAR “probably prematurely called that yellow flag.”

The checkered flag was already waving for Blaney, who was approaching the start-finish line when the caution lights suddenly came on because of Ricky Stenhouse Jr. scrapping the wall at the back of the field. The No. 12 crew was already celebrating the victory in the pits and Blaney had lowered the window net on the backstretch.

“It was kind of short-lived panic mode in my spot of like how the hell am I going to get this window net back up because it almost takes two people to do it outside the car, let alone me and my scrawny arms inside the car sitting down and not being able to get a lot of leverage on it," Blaney said.

Blaney spent pretty much the entire caution period trying to secure the net, all while having to maintain speed. It wasn't until on the backstretch just before the restart, when he clearly had both hands on the wheel and the net was up, that NASCAR determined he was good to go. Blaney said he felt perfectly safe.

“It’s tough because he deserved to win the race, but if you mess up and you break a rule — not intentionally, but there’s rules and we have rules in place for safety," Hamlin said.

Hamlin wrote in a tweet after the race that NASCAR “put Blaney in the situation he was in. To make up for it they let him break a rule. 2 wrongs don’t make a right. Blaney W, NASCAR L.”

Miller said there was no way to know if Blaney got the net fully latched or not, but that NASCAR didn't see anything that could force a penalty at the time.

Blaney said he wasn't going to pit, and also that he understood Hamlin's frustration.

"But it’s just a product of running second compared to winning,” Blaney said. “He would be over the moon elated in my position if he won the race and I’d be ticked off just like he was if he was second, so just kind of depends on the spot, so can’t blame him.”

Hamlin even said he would have done the same thing that Blaney did if the situation had been reversed.

Pushed by his Penske teammate Austin Cindric on the restart after the green-white-checkered finish. Blaney was able to stay in front and hold off Hamlin, who finished 0.266 seconds behind.

“The No. 12 team, they had the fastest car all night and if I wasn’t going to win it, I was committed to helping him,” said Cindric who finished third, just ahead of Joey Logano, another Penske driver. “I lined up behind him on that last restart and gave him the best push possible.”