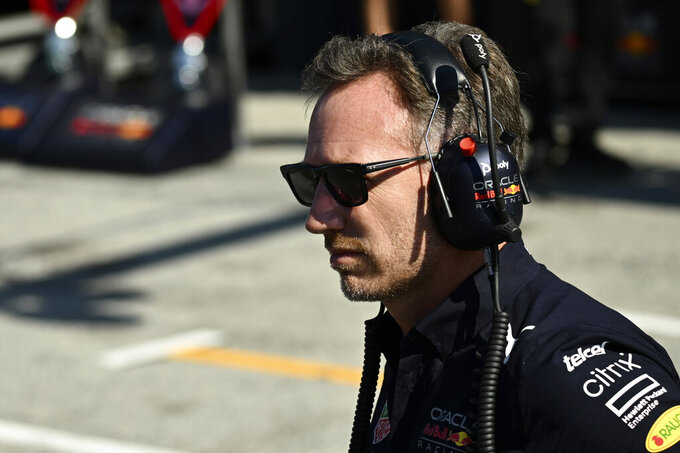 Red Bull team principal Christian Horner angrily hit back Saturday at “fictitious claims” by rivals that his team breached Formula One's budget cap last year and said he is considering legal action if they are not withdrawn.

F1 set a budget cap of $145 million last year, when Max Verstappen narrowly won his first world title after beating Lewis Hamilton in a controversial finish to the last race.

Reports have speculated that Red Bull went above the budget cap by 5% — or around $7 million — which constitutes a more serious material breach and could be punishable by a ban. Less than 5% is considered a minor breach which could lead to a deduction of points or a suspension. Verstappen appears unlikely to lose his 2021 title.

“As far as we understand, there’s a team in minor breach, which is more procedural, and another team that is fundamentally massively over,” Wolff said on Sky TV on Friday. “So that’s an open secret in the paddock.”

“We were a little bit taken aback by the comments from our two rival teams," Horner said at a news conference at the Singapore Grand Prix. “The submissions between the team and the FIA is confidential, and I have no idea what the outcome of our rivals’ submission is so I would be intrigued to know where their source of information for these fictitious claims has come from."

Horner called the claims “hugely defamatory" and claimed their timing is linked to Verstappen being on the verge of clinching his second straight world title.

“One can only assume that it is not a coincidence that this comes at a point where Max has his first strike at a world championship,” Horner said. “We are here talking about cost caps rather than the phenomenal performance Max has had this year. It is an underhand tactic employed to detract from perhaps a lack of performance on track from our rivals."

Mercedes has won every constructors’ championship since 2014 but seven-time F1 champion Hamilton and George Russell have not won a race between them this year. Ferrari last won the drivers’ title in 2007 and has made a string of errors this season.

Wolff and Horner had a tense relationship last year which was pushed to breaking point when they openly bickered at an intense news conference in Qatar near the end of last season.

The FIA has only commented briefly on the matter, saying late Friday that the process was still ongoing and also disputing claims that have been made in the Singapore paddock.

“The FIA is currently finalizing the assessment of the 2021 financial data submitted by all Formula 1 teams. Alleged breaches of the Financial Regulations, if any, will be dealt with according to the formal process set out in the regulations,” the statement said. “The FIA notes significant and unsubstantiated speculation and conjecture in relation to this matter, and reiterates that the assessment is ongoing and due process will be followed without consideration to any external discussion.”

Horner said his team is prepared to take legal action if the allegations made against Red Bull are not withdrawn.

“The FIA has stated that they have not completed their process, so unless there is a clear withdrawal of those statements, we will be taking it extremely seriously," Horner said. “We will look at all the options available to us because it is absolutely unacceptable to be making the comments that were made yesterday which are totally defamatory to the team, to the brands, and to Formula One."

“To reiterate, what is totally unacceptable, is for teams that are not party to any form of the submission to be making claims about our submission and about perspective penalties ... It is just bang out of order," Horner said. He added: "When these accusations are made, people in glass houses shouldn’t throw stones.”

The FIA is set to give its verdict by Wednesday next week, when it issues compliance certificates, with Aston Martin reportedly another team that allegedly breached the 2021 cap.

Any proven breach would have had an impact on a team’s performance in 2022 and on the car's development for next year.

“It’s now no secret that two teams broke the 2021 budget cap regulations, one by a significant amount, the other less so,” Ferrari’s race director Laurent Mekies told Sky Italia. “We regard this as something very serious and we expect the FIA to manage the situation in exemplary fashion. We trust the FIA 100%.”

Horner has no idea how other teams would even know.

“It is a private submission between the team and the FIA. So how on earth can any team know the detail of our submission?” Horner said. “We don’t even know if we’re in breach. We don’t even know until next week, until the process has been completed.”

The budget cap was introduced with the aim of making for a more level playing field in F1 and to reduce the spending might of powerhouses like Mercedes, Ferrari and Red Bull.