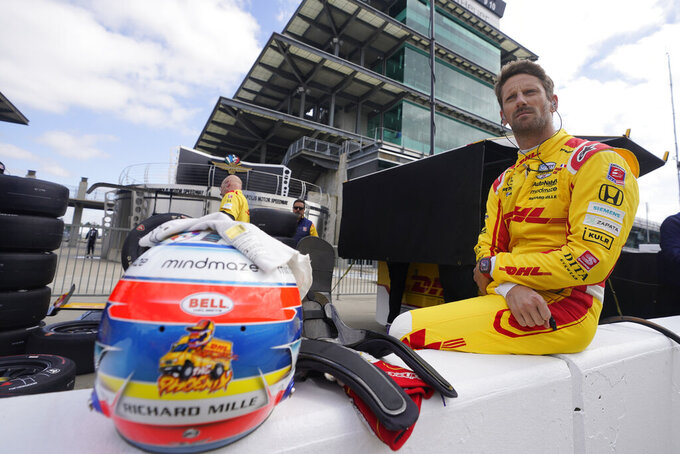 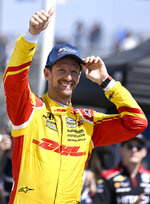 LEEDS, Ala. (AP) — The honeymoon is over for Romain Grosjean, and if Barber Motorsports Park had hosted a boxing match, then Graham Rahal would have at least bloodied IndyCar's darling.

Grosjean has romanced his way through IndyCar since last year, when “The Phoenix” chose to race in the United States once recovered from the fiery crash that nearly killed him in a spectacular Formula One wreck. His scarred hands were part of a comeback story that wooed Americans already familiar with the Frenchman’s F1 career through Netflix.

Winless in 10 seasons, Grosjean was suspended one race a decade ago for his role in a crash and struggled through five unsatisfying seasons with American team, Haas. Then he narrowly escaped burning to death when he freed himself from fiery wreckage with two races remaining in his F1 career.

An IndyCar community with an insatiable thirst for shiny new stars embraced The Phoenix as its own supernova.

Grosjean won most popular driver in an offseason fan survey after just one year in IndyCar, and he now drives for one of IndyCar's biggest teams. He's running the full schedule with Andretti Autosport, will make his Indianapolis 500 debut this month, and try to win the IndyCar championship.

Although he’s made some costly on-track mistakes along the way — he misjudged Portland’s first turn last September, ran over the back of Takuma Sato at St. Pete in February — nothing caused as dramatic an outburst as his run-in with Rahal on Sunday in the final laps at Barber.

The two were battling for seventh and eighth and Rahal felt he gave Grosjean enough room for a fair race for position. Instead, he alleged Grosjean intentionally hit him and then took it a step further in referencing Grosjean’s time in F1.

“Another driver in the series told me ‘You can’t teach an old dog new tricks’ and that’s kind of been his reputation his whole career in Europe,” Rahal said. “We’re learning his reputation quickly here. To me, if race control doesn’t want to do anything, then they’re not going to do anything. But when we go and punt him, they better not do anything to me, when in the past, I’ve been penalized for a lot less than that.”

Rahal referenced this year’s season-opener at St. Pete, where Grosjean finished fifth but was involved in a handful of incidents, including a bizarre collision during a practice session when he simply ran up and over the back of Sato’s car. At Barber, Rahal said his late-race showdown with Grosjean put him alongside Alexander Rossi and Colton Herta — two of Grosjean’s teammates — as drivers Grosjean hit Sunday.

“In St Pete, he hit everybody he could hit,” Rahal fumed. “We come here, he hit Rossi, he hit Herta, he hit me. At some point, we’ve got to clean up our act.”

Grosjean acknowledged he had contact with Rahal — “we touched a couple of times” — but didn’t seem concerned with what he deemed “good racing.”

“It’s good racing I guess, it’s IndyCar. It’s wheel-to-wheel racing,” he said, denying Rahal’s claim that Grosjean deliberately hit him. “I think it’s just hard racing. I was later on the brakes than he was, there was a bit more grip on the outside, I was a bit deep in the corner. It was a gentle touch because it’s so hard to pass, there’s a lot of wheel-banging.”

It's the second prolific incident Rahal has had with an Andretti driver through only four races. Rahal and Helio Castroneves were wrecked in March at Texas Motor Speedway by Devlin DeFrancesco, a rookie for Andretti who was penalized by IndyCar for the incident.

But the reaction after the crash was muted compared to Rahal's rage at Grosjean, with the difference apparently that Rahal believes the 22-year-old DeFrancesco can still be taught by series veterans. His fuse was far shorter with Grosjean, and Rahal called him a “punk” over his radio while alleging Grosjean deliberately crashed into him.

Rahal vowed to race Grosjean the same way, a threat that may loom large over IndyCar as it heads to Indianapolis Motor Speedway for the biggest month of its year.